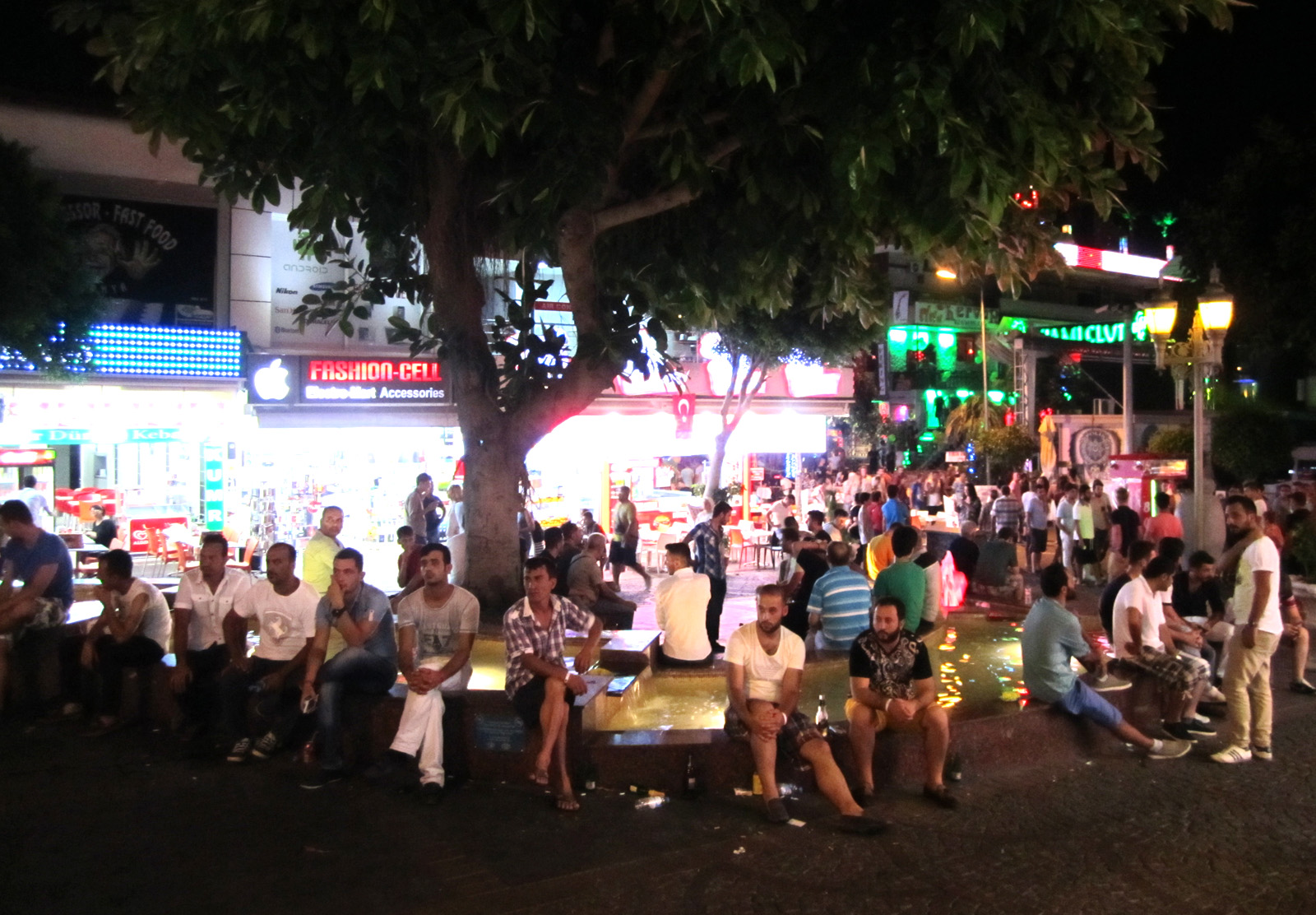 There were a lot of negatives in my recent trip to Turkey, but a positive was being able to witness how Turkish men work in groups to get laid. For men who are not allowed to pick up their local women due to cultural and social barriers, I was duly impressed with their wingmanship and coordination. I will now attempt to dissect the game and wingman ability of Turkish men.

1. They go out in groups of at least three, with defined roles for each member

One guy is the “translator,” meaning he has the best English and facilitates conversation with foreign women. Another is the “lead clown” with the best energy and dance skills. And yet another is the “bouncer” who keeps an eye on outsider men and informs the group of any possible intruders. Instead of all the guys in the group running game independently without accounting for what their wings are doing, Turkish men maximize their individual strengths to ensure group success. There is no lone wolf game—it’s a team effort.

There’s not much subtlety about the Turkish approach. As if performing a blitzkrieg attack, they all go in simultaneously to announce to the women that they have arrived and are definitely in pursuit. They begin smiling, touching, and joking almost immediately, usually with a plan to get the girls dancing as quickly as possible. Their initial game is heavily based on the physical.

Long chats in the club are not what Turkish men prefer. While they are actually able to run this type of game, their go-to weapon at night is the dance floor. Many of them dance surprisingly well, practicing for years as teenagers to Turkish music until making the switch to more mainstream house and hip hop. Since women are in the club to primarily dance, their strategy yields results.

4. View all non-Turkish women as sluts

Turkish men understand that the true value of foreign women, especially from the West, is to serve as sex dolls. They don’t insult these girls or call them names, but through their actions, they make it clear that sex is the goal on their mind. They may lie to women about wanting to take trips with them, among other beta declarations, but it is just to build comfort after attraction is established. They have in fact no desire to wife up these girls and simply want to use them for the sexual release that they can not have with their own women.

5. Immediately engage and neutralize any threat

Turkish men keep an eye on other men just as much as the women. They fully understand that any fish they catch must be kept clear from the hooks of other fishermen. One thing they do is position themselves around women they are talking to in a way that completely blocks any other man who may want to try an approach.

If a man does penetrate through their defenses, they immediately re-group to eject him, either by distracting him (with the same energy they use on the girls), or getting the bouncer of the group to deliver a not-so-subtle admonishment of “these girls are with us.” It’s extremely effective since it doesn’t rely on the kindness of women to be cold to interloping men.

I’m in full agreement with their strategy here: if you’re just starting a conversation with a girl in a club, you must immediately shut down any attempts by strange men, even if it makes you look needy. Only when a girl’s attraction for you is solid can you be more aloof.

6. Do not approach women who are with men

There is a scrap of honor among Turkish men in that they don’t interrupt you if you’re talking to a girl (as long as you appear Turkish). I have not seen them try to pull a robbery, as horny as they are. In a club I saw a Turkish man inform a random German man that his girl is wandering off and needed to be watched more carefully. I’ve never seen that type of behavior in America. It’s strange that Turkish men are more thirsty on the surface than American guys, but they are much more averse to cockblocking or watching another guy’s girl get stolen.

7. Make all girls in the group feel like princesses, no matter how ugly

There’s taking one for the team, and then there’s the Turkish version of it. I have seen good looking Turkish men wing their brothers with horrendous women—all night long. I’ll talk to the ugly girl for 10 minutes or so to help my buddy out while a Turkish man stays with the grenade for the whole night and with such an energy that it appears he really does like her, even though it is a physical impossibility due to her monstrous appearance.

Turkish men take bros before hoes to a level I haven’t seen, and as long as one girl in a group is pretty, all the men will give it their all on each of her friends. It gets to the point where if the hottest girl wants to leave, the ugly ones will convince her to stay because they are being pursued so vigorously by men who are much more handsome than they are pretty.

Turkish men aren’t so needy that they are buying drinks all night long, but they definitely do try to lock down girls with a strategic purchase of a bottle of liquor. Their funds are lower than other European players, so they have to pool their money to keep the party going, which is why you tend to see them in packs. It’s another example of working in groups to minimize individual weakness.

They don’t accept the first no that a girl gives them, even if it’s absolutely certain to an outside observer that that no won’t be changed. This feature of their game, more than anything else, has given them a bad reputation as hyper-persistent, and even I don’t see its effectiveness.

While persisting past a no late in the game when you’re close to sex is important, Turkish men ignore no’s that come right upon the approach, and once in a set with a girl, they will not leave unless the girl pushes him away or ignores him completely. This can be painful to watch, and even worse is that you know the girl will be much less receptive if you approach her afterwards because the Turk put her in a more sour mood.

10. Victory is had if only one man of the group gets laid

Their goal isn’t necessarily for all men of the group to get laid—it’s just for one member to score. If he is successful, on the next night he’s going to sacrifice several hours with the ugliest beast in the bar so that his boy can get laid. They have a complete selflessness that I haven’t seen in other men, all because they see getting laid as a long-term team effort instead of a short-term individual sport. The sacrifice they make for their fellow man is admirable.

Watching groups of Turkish men in a club is like witnessing a coordinated dance. If you’re solo in a club with a lot of Turkish men, you should consider leaving. The synergy they bring forth makes it hard to compete and they greatly increase the bitch shield of women they fail with. The only problem with adopting Turkish game is that it clashes with a Western man’s individualistic values. We’re too selfish to sacrifice entire nights on nuclear grenades, especially since the idea of friendship and loyalty in the West is not what it once was. In the USA, it’s more likely to happen that you sacrifice for your friend one night and then the next night he gets overly drunk and inadvertently becomes a cockblocker. In Turkey this simply does not occur.

From watching them work, I must say that their overall game is better than Spanish men, who have become pussified in the past decade, though not yet better than Italian men. I haven’t seen non-whoremonger Greek men in action but I assume they would place somewhere in the middle in a ranking of Mediterranean lotharios.

Turkish men get a bad reputation in the world, but they do some things that are worth emulating when operating in a club with friends. Nonetheless, let’s count our blessings that we are not in Turkey and have to rely solely on foreign women to get laid.

Don’t Miss: Are Turkish Girls Worth It?