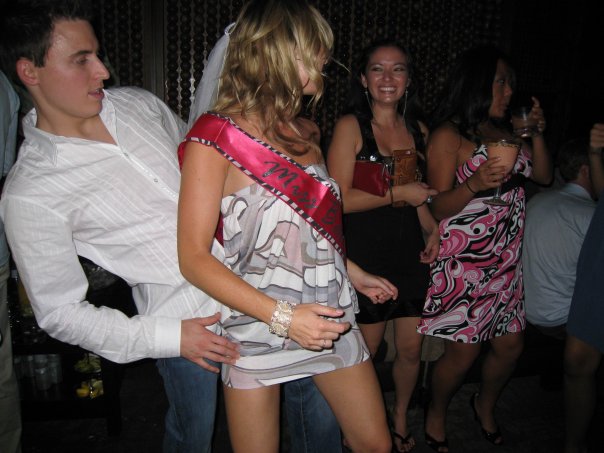 1. Lack of originality. Men who look as generic as possible with jeans and stripped shirt uniform. Women who stay on top of trends spoon fed to them through advertising.

2. Bad hair. Men who dip their heads in buckets of pomade wax. Women who don’t let their hair grow out to proper feminine length (small of back).

3. Feminization of men. Men who are clean shaven in an attempt to have smooth skin like a girl instead of a rugged ugly face like a real man.

4. Bad time management. Men who waste time on girls who obviously are not going to bang them. Young man in the photo is sinking time into a girl who is about to get married. He’d have better luck trying to convert a lesbian. Single girls in picture are not making flirty eye contact with other men even though they are single, lonely, and most likely desperate.

5. No concept of respect or commitment. Bride-to-be allows a strange man to rub his erection on her ass a day or two before exchanging vows to another man. Leads to….

6. Perverse idea of marriage. Doing it just to do it, not because you want to spend the rest of your life with someone. This marriage will not cross the three year mark.

7. Attention whoring. Women who get off on attention, no matter how negative. Bride-to-be on a mission to specifically get drunk and arouse strange men because of bachelorette party “custom.”

9. Perennial debtors. Does not understand the concept of saving or living within one’s means.

12. No rhythm or dancing skills. Look at the young man with his awkward lean move.

13. Nosy and interfering. Girl in black dress is getting a kick that her friend is getting grinded on but will soon “save” her. Even if future bride wasn’t getting married, the cockblock has a 90% chance of occurring.

14. Approval seeking. Bride-to-be is looking at her friend to see if her behavior is deemed acceptable or not. She doesn’t know how to act or think unless she gets cues from girls she knows, or celebrities she reads about in glossy magazines.