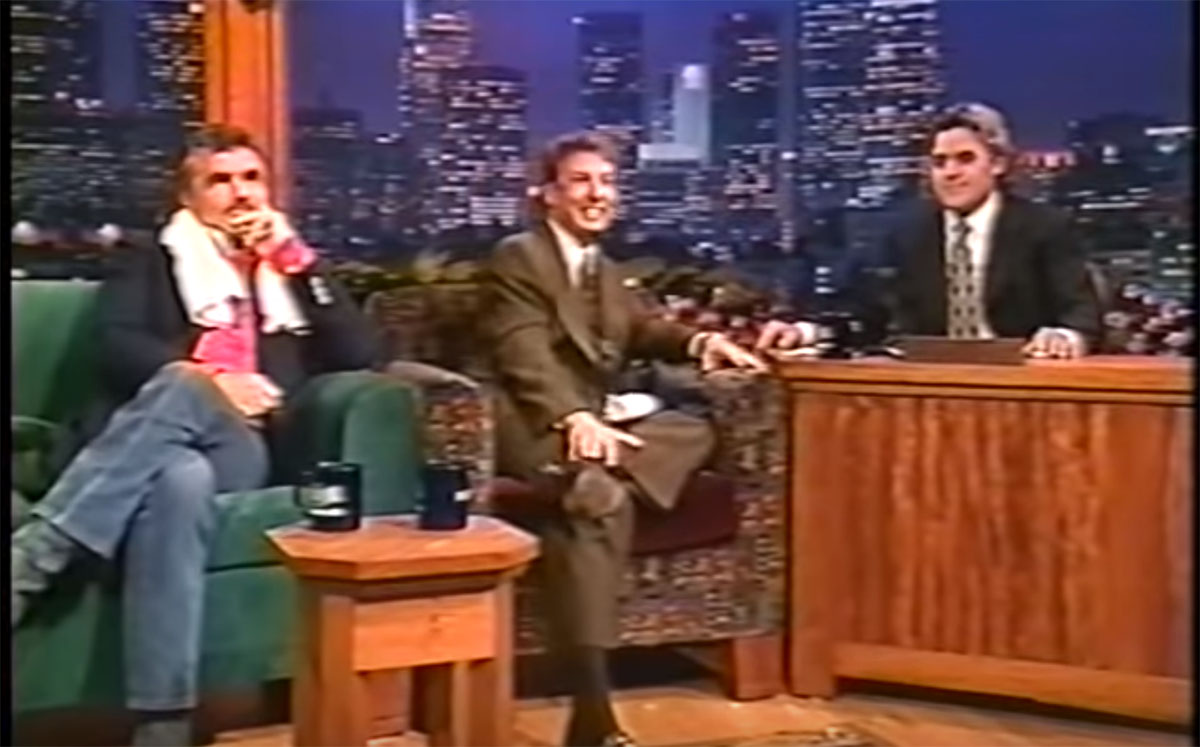 On October 17, 1994, Burt Reynolds and Marc Summers appeared on The Tonight Show with Jay Leno. They proceeded to have an altercation that turned out to be a case study of what happens when a man is confronted by another who is more alpha. I recommend you watch the below video first, read my analysis, and then re-watch it to catch anything you missed.

Analysis of the confrontation

Burt came on as the first guest to promote his new book. After his interview with Leno, Marc was announced as the second guest. Marc glided through the stage with spirited confidence. He shook Leno’s hand and then made a noticeable swallow when he shook Burt’s. Already, there is fear, which was reportedly due to the fact that Marc had previously made jokes about Burt’s divorce habit. I suspect that Marc did not plan on ever seeing Burt in such close quarters.

As the interview with Leno begins, Marc contorts his body away from Burt’s, as if hoping he will somehow disappear. He also crosses his legs, which is usually the body’s way of seeking comfort. Burt then makes some kind of noise or movement at 1:13 that catches Marc’s attention. He looks over to see what is going on. Burt takes that as an opportunity to insert himself into the conversation.

Marc re-adjusts his body language to accommodate Burt, but quickly goes back to facing Leno with legs crossed in the hope that Burt doesn’t interrupt again. That hope is dashed. Burt interrupts Marc to criticize his distant body language. Marc immediately adjusts his body to please Burt and his dominant frame. Marc then obediently answers two of Burt’s questions before catching his own subservience. He feels inferior and attempts to re-assert dominance by patting Burt on the back while making a joke about the fact that Burt is going through a divorce.

Burt does not submit to Marc’s frame by responding with a verbal insult of his own. Instead, he escalates the situation by dumping a mug of water onto Marc’s lap. Marc is shocked yet tries to laugh it off, and then attempts to splash Burt with a mug of water, but Burt is too quick and blocks the incoming attack, causing both the mug and water to impact Marc’s face. There is a flash at 1:54 where you can see Marc expressing genuine fear. He quickly recomposes himself and tries to show apathy by smiling while Burt continues to sit stone-faced as if nothing abnormal is going on.

Burt then leans over and makes a threatening gesture with his hands. Marc shows a sign of submission by separating his hands instead of adopting a defensive posture. It has gone too far for him. Judging by his stunned reaction and high-pitched nervous laughter, I wouldn’t be surprised if this was the most violent encounter that he had ever experienced in his life.

At 2:18, Marc reaches for another mug but stops himself upon realizing that Burt will likely retaliate. He gets tongue-tied, repeatedly saying “you know” until finally getting his sentence out. Burt remains calm. Not yet done with his fun, Burt pats Marc on the hand to display dominance. Without looking back at Burt, Marc says “Don’t touch me” in a serious tone. Perhaps realizing he has gone too far, Burt says he’s “Sorry.” Marc takes advantage of the apology by facing Burt and asking him a question to control the frame. Burt does not take the bait.

To capitalize on the drama, the show’s producers set up a cream pie duel. The two men start with their backs to each other. Leno begins the count to three. Burt, ever the scoundrel, launches his pie at the count of 2.5 with great force, landing a direct hit on Marc’s face. The impact was so strong that Marc took several pitty-pat steps backwards out of fear that additional blows would rain down upon him. Burt gets weakly hit by Marc’s pie at a glancing angle and responds with a devilish smirk.

Marc is dissatisfied with the duel and considers launching a sneak attack from behind, but again, fear causes him to hesitate. He almost slips on the floor. It’s clear that Marc senses he has been disproportionately attacked. He strains for ways to get even.

Burt, feeling his opponent’s humiliation, extends a sign of submission by hugging Marc, which is quickly accepted. Marc then experiences a surge of confidence and accepts another cream pie that was handed to him, but hesitates at the crucial moment.

The mood becomes more light-hearted as Burt helps clean Marc off, but he can’t resist giving one final display of dominance by pulling Marc towards him from behind (6:33). Marc appears happy that the embarrassment is over.

Three lessons we can learn from Burt and Marc’s confrontation

1. Confidence can only be faked until the unexpected happens

Marc, a veteran television personality, seemed confident and polished when his name was first announced. He was displaying a fake, learned confidence, something he is able to turn on when a camera is pointed at him, but as soon as he encountered a novel situation that diverged from his previous experiences, he reacted in a way that reflected his baseline levels of fear, anxiety, and submissiveness.

Burt also responded emotionally, as his water toss was clearly spur-of-the-moment. While both men are famous in their own right, one possessed a higher level of natural confidence that allowed him to dominate another man in a spontaneous encounter that neither of them had prepared for. By not submitting to the frame of a clearly more dominant man, Marc lost the battle and had to endure public humiliation.

2. If you give your enemy an inch, he will take a mile

The only three instances that Marc felt a surge of confidence was when Burt showed submission signs by apologizing, lowering his physical defenses by reclining on the couch, and offering a hug. Each time, Marc used the submission signal to retaliate. Luckily for Burt, Marc was too beta to successfully complete his counter-attacks.

Paradoxically, Burt’s signs of submission actually made him appear more human. Going for the jugular on national television, which he could have easily done, may have led to a public relations nightmare. Either Burt stopped short to not be perceived as a bully, or he is not the ultimate alpha, and could be defeated in a battle with a man who would not so easily show submission signals.

While Burt’s submissions played well on television since the scorecard was so heavily tilted in his favor, real-life encounters must be approached more cold-heartedly. If you don’t completely destroy or incapacitate your enemy, you merely give him an opening to take you down. It’s not wise to enter any confrontation unless you’re prepared to go all the way.

3. Don’t assume someone with more status (money, fame, women, etc.) is more alpha than you.

Even though Burt was the first guest on the show, he wasn’t doing well at the time. He just lost the love of his life, was having money problems, and as Marc implied, was having trouble getting movie roles. Objectively, Marc was doing better, but material success only weakly correlates to male dominance. In fact, it could be the case that the more financially successful a man is, the more likely he had to submit to other more powerful men in order to achieve his station. This becomes quite literal in the sexual sense with Hollywood actors, who agree to be sodomized for a chance at fame.

You can’t buy or win your way into alpha. Famous beta males like Jeff Bezos, Elon Musk, Anthony Bourdain, and Aziz Ansari clearly show that. Assuming you are not born alpha, which most men aren’t, you can achieve it only by unlocking it internally through your belief system and mental framework. Until you understand yourself, face your fears, and neutralize your anxieties, you won’t be able to properly size up or face your enemies.

This encounter is a microcosm of how men of different power levels interact in day-to-day life. While most interactions don’t involve mugs of water or cream pies, a careful observer can pick out dozens of signs of submission and dominance in the most banal of conversations between men. It’s rather easy to appear dominant in calm and predictable scenarios, but when things get raw and spontaneous, like it did for Marc Summers and Burt Reynolds, the only strength that gets displayed is what’s already within you.

Read Next: “My Way” Is The Most Masculine Song Ever Created