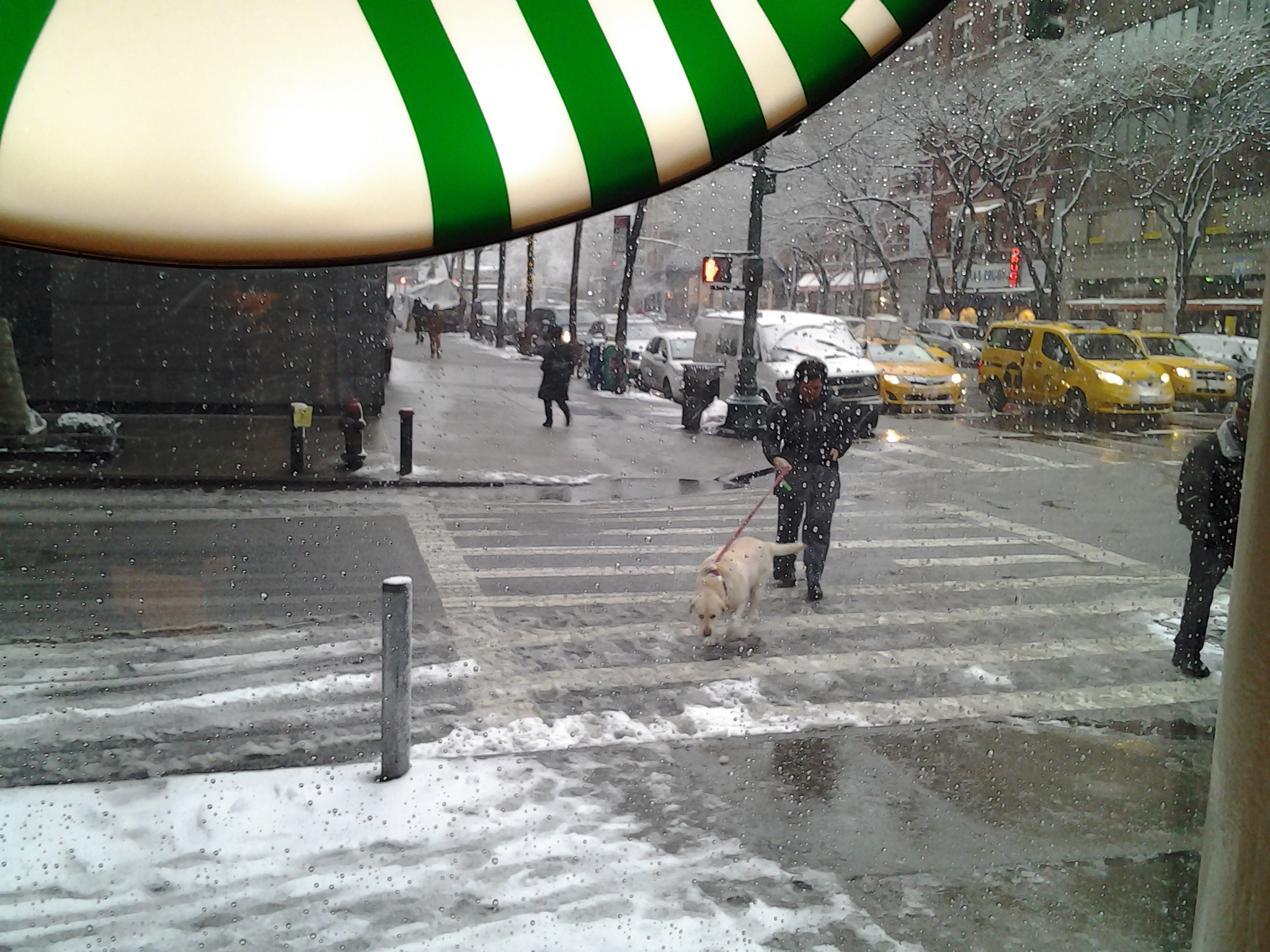 I went to New York recently for a two night “business” trip. As short as it was, I kept my eyes open to digest as much as I could about the city and its people. Here are a few observations I made:

1. You see the grind in people’s eyes

Unlike in Washington DC, you can clearly feel the harsh effects of the city on the people. Based on how expensive it is to live in New York, to have a good life you have to work like a dog with little in the way of breaks for reflection or relaxation. I suspect that a lot of people are living paycheck to paycheck without much in savings, and so are committed to this grind whether they like it or not. The allure of living in New York has essentially captured their body and turned them into a human mule that must never stop laboring and hustling. I observed the same with people in Moscow.

If a New Yorker’s income goes up, they invariably increase the standard at which they live to keep up with the Joneses, so it seems that even if you “win” in New York by getting a job that pays at least $150,000 a year, you still lose in the sense that you won’t accumulate much in the way of wealth, and will be two or three months away from destitution if you happen to lose your job and have trouble finding a new one.

A lot of people have asked me, “Roosh, how you can play the game for so many years without getting tired of it?” Because my job is not a grind, and chasing pussy will never approach the level of grind of labor. I can stay in the game because my life is mostly free of stress in other areas, meaning I can tolerate the high amounts of nonsense I get from pursuing women for the length of time I have. If you’re getting worn down by your job, you will have little leftover for the other grinds that come with a man’s ambitious desires.

2. Smartphones are now a integral part of people’s lives

While walking around New York, I was paranoid of getting hit by a car, so I looked both ways before crossing streets and generally followed the “Don’t Walk” signals. I was shocked to see so many people walking while texting in such an environment. I don’t know how often pedestrians get hit in New York, but it seemed like they were putting their lives in danger.

In the cafes I went to, it was a rule that everyone was staring at their iphone or tablet screen, and even in meetings between friends, a person would keep one eye on their friend and one eye on their phone. The smartphone is now a conversational aid, crutch, and prop that must be nearby to show a picture, news article, status update, or map. Conversations with friends have become multimedia presentations. I’ve railed against smartphones in the past, but they are now too intertwined in the social fiber of America that nothing much can be done about the problem.

A lot of guys are capitalizing on smartphones by mastering dick pic game or using high-tech bots on popular dating apps, but there is no joy for me to use such a device beyond a basic business or communication need, so I accept I will miss out on some sexual benefits from its widespread use.

3. Made men have it best

If you want to live in this city and enjoy it to the fullest, you should already come as a made man with over $300,000 a year in income or a couple million in the bank. Of course you can live in New York for a fraction of that, and find a niche that does give you happiness, but New York allows you to live a regal lifestyle if you have the bankroll.

In the Polish city I’m in, doubling my income would not change my lifestyle one bit, because the city does not have the amenities, Dubai whores, or luxury accommodations that the money could obviously be spent on. The most expensive club cover charge I’ve found is $13 and a cocktail drink price never passes $10.

If you decide to live in New York, there are two options that await you:

a) Become a part of the grind for a short period. Get a humble apartment, work for the man, count your quarters, and squeeze in some easy bangs. After a year or two, when you realize you’ve saved no money and have few—if any—deep relationships, go somewhere else to achieve more financial independence and a higher level of social meaning that takes you away from more shallow pursuits.

b) Accumulate further wealth on top of your already high wealth. Let New York live for you instead of you living for New York. Live like a modern king with a lifestyle that your ancestors couldn’t even dream of.

While my income is high enough to live in New York on favorable terms, my financial cushion would be shrunk to such a degree that I wouldn’t be entirely comfortable.

4. The girls are way better than in Washington DC

My sample size is tiny due to the shortness of my trip (about 10 approaches), but the positive reactions I got from those 10 in an eight-hour period surpass near all the approaches I did in Washington DC for an entire month when I visited last year.

The girls I approached were insanely receptive and genuinely wanted to talk to me. We say in these parts that girls have a lot of options thanks to internet dating while losing the ability to have a conversation if we approach them, but it seems that in New York the dating market is exceptional in some ways due to local demographic conditions and the fact that straight man act effeminate. The girls seem to be craving a confident guy who doesn’t put them on the pedestal and has internationally renowned clown banter.

Not a single girl blew me out, insulted me, or hit me with a feminist talking point. Only one girl looked at her iphone during the conversation. They asked me plenty of personal questions. They did way more talking and helped move the communication forward. One 22-year-old girl approached me in the bar and let me escort her away from her friends for a sloppy make-out session (to be young again!). Another girl gave me her number and then sent me a text asking for a date the next night. The interactions stalled, sadly, when girls found out I was a tourist and staying in a hotel, especially since a couple of those girls would have needed a date to take the intimacy further.

Again, the sample size is small, so no grand conclusions can be made, but if I can duplicate this reception just once in a while, that means girls in New York like me more than girls in Poland. In Poland, a huge number of girls are already in a serious relationship and aren’t as eager to upgrade, so most of my approaches stall for that reason alone. In New York, it seemed that every girl I talked to was sexually available from not being in a serious relationship.

This may be my ego talking, but I’m confident I can get both higher quality and quantity in New York than in my current city in Poland. This isn’t due to just me but the local conditions where New York girls are ready for sex with a mature man who doesn’t act like a fag. It was also interesting to note that girls give quite a bit of eye contact, possibly just as much as in Poland.

Upon returning to Poland, I did a batch of ten approaches and had lower results than the ten in New York. One girl in Poland even rolled her eyes at me, a harsh response that a New York girl did not once give. Poland was amazing for me in 2011, but it’s clear that the tide has turned, and the benefit it offers for me has become mostly financial.

Is Repatriation Now On The Table?

It’s interesting to note that one of the reasons I left the USA is to get a better standard of woman, but it seems that I may have passed a point where I can now do better in New York than abroad. My years of international experience has possibly made me a more attractive catch back in the States. I would have to stay much longer to be sure, but the idea of living in a Western city like New York wouldn’t be a nightmare scenario like in the past.

I calculated that I would need at least $6,000 a month cash to transfer my current lifestyle from Poland to New York, which is four times what I’m currently spending now. Even with that amount, I’d still have to watch my budget and be careful about buying too many rounds of drinks for my friends when I’m in a nice bar and having fun, unlike in Poland where I can make it rain all night without any concern. I would receive two main immediate benefits if I lived in New York: (1) unlimited options for entertainment and easy fornication, and (2) a large social circle of male peers.

The second reason appeals the most to me, but such friendships will invariably entail late nights out, excessive alcohol use, and chasing women. I wonder if it’s a good idea to slip back into that lifestyle, one that I already did before. At nearly 36 years of age, will pursuing more notches and going out to bars three times a week really give me more in life than focusing on my work and being alone in a tame Polish city? As you know, sequels are never better than the original, so I wonder how quickly I’d get tired of it.

I know more than anyone that a city or country can change rapidly. As I’ve shared recently, Polish culture is currently on the decline along with most other parts of Eastern Europe. It may happen within 2-5 years where Poland degrades to such a point that I must move to another area of the world. Eastern Europe may merely be a way station for a destination I do not yet know. I’m not sure what the future will hold, but this is the first year since I left the States over five years ago that the idea of moving back wouldn’t fill me with reluctance and dread.

If I ever do move to New York, and it’s not a temporary plan, you can interpret that as me giving up on all notion of ever having a family of my own. It means I must have decided that during the period of humanity I happen to exist in, a life of expensive pleasure is the best outcome to pursue.

Read Next: 16 Things I Realized About Washington DC In 2014