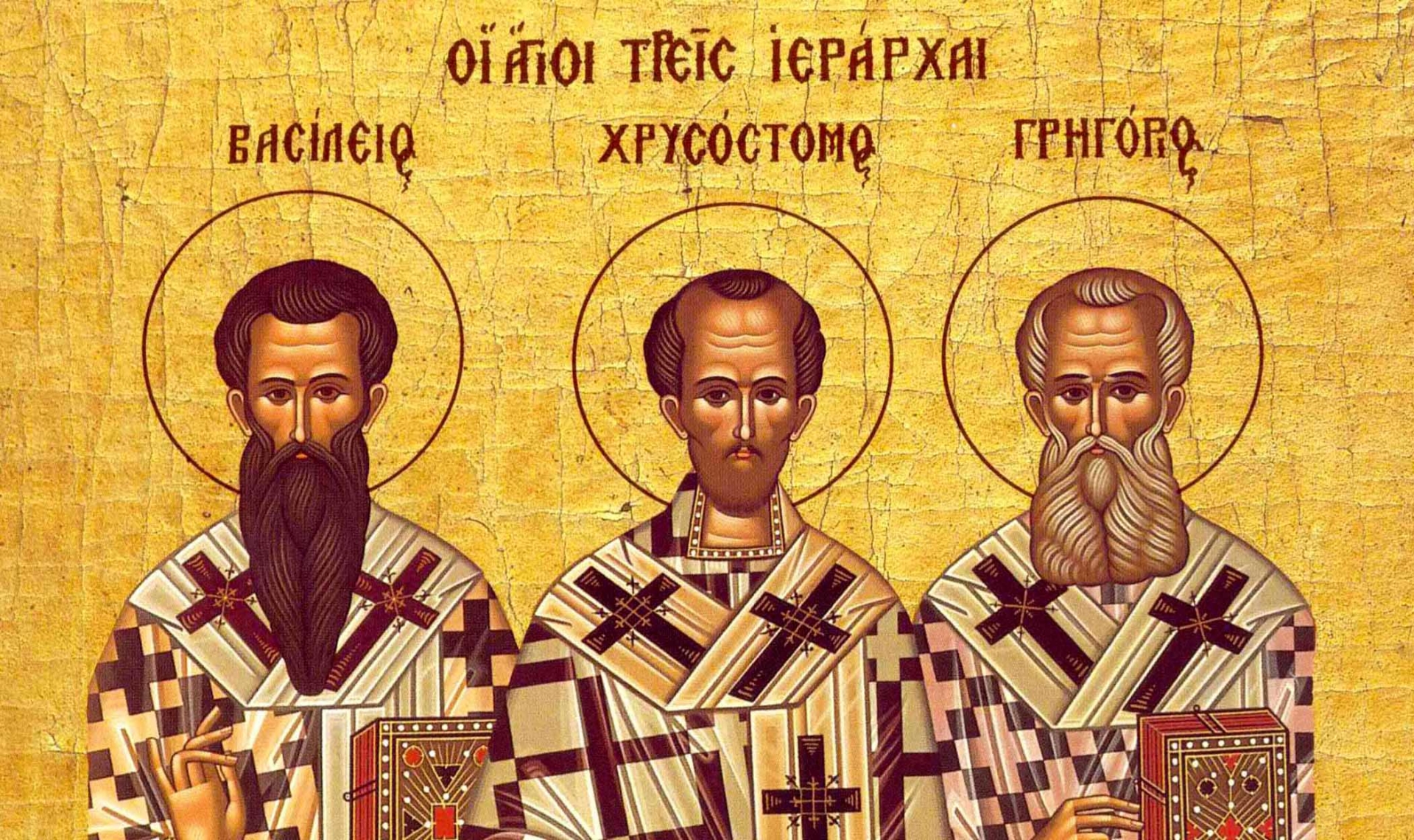 On God and Christ is a book by Saint Gregory of Nazianzus, one of the three Cappadocian Fathers, who were all instrumental in elucidating Christian theology before the Schism. This work features five sermons by Saint Gregory that help us understand the mystery of God.

…there is an educative and progressive unfolding and knowledge of the God whose being is unfathomable.

This also applies on the individual level. If you have gone through repentance and come to behold the presence of the One God, I can safely assume that it was done in a stepwise manner. You didn’t receive the full complement of God’s grace in one moment because your damaged soul would not be able to withstand or comprehend it.

I know people who get noticeably uncomfortable when talking about God or stepping into a church. If that person was given a vision like was given to the Prophets, what would happen to them? They would probably go insane. The infinitely wise Teacher has a lesson plan for you to complete a course that will take the remainder of your life.

Theology is not for everyone

Discussion of theology is not for everyone, I tell you, not for everyone—it is no such inexpensive or effortless pursuit. Nor, I would add, is it for every occasion, or every audience; neither are all its aspects open to inquiry. It must be reserved for certain occasions, for certain audiences, and certain limits must be observed. It is not for all people, but only for those who have been tested and have found a sound footing in study, and, more importantly, have undergone, or at the very least are undergoing, purification of body and soul. For one who is not pure to lay hold of pure things is dangerous, just as it is for weak eyes to look at the sun’s brightness.

The opinions about deity that hold pride of place are three in number: atheism, polytheism, and monotheism. With the first two the children of Greece amused themselves. Let the game go on! Atheism with its lack of a governing principle involves disorder. Polytheism, with a plurality of such principles, involves faction and hence the absence of a governing principle, and this involves disorder again. Both lead to an identical result—lack of order, which, in turn, leads to disintegration, disorder being the prelude to disintegration. Monotheism, with its single governing principle, is what we value—not monotheism define as the sovereignty of a single person (after all, self-discordant unity can become a plurality) but the single rule produced by equality of nature, harmony of will, identity of action, and the convergence towards their source of what springs from unity—none of which is possible in the case of created nature.

In the West, due to our lack of faith in God, it appears that we are rapidly advancing from the stage of disorder into disintegration, and it’s this shift that God is using to bring many people into the Church. Many souls can tolerate a degree of disorder, enough so that they don’t pursue the faith, but few souls, even those who are inclined towards evil, can tolerate disintegration, for it is a prelude of painful eternal torments, and so such evil attacks their conscience and they begin to repent towards the all-governing order that only God can provide.

Theology of the Holy Trinity

We have one God because there is a single Godhead. Though there are three objects of belief, they derive from the single whole and have reference to it. They do not have degrees of being God or degrees of priority over against one another. They are not sundered in will or divided in power. You cannot find there any of the properties inherent in things divisible. To express it succinctly, the Godhead exists undivided in beings divided. It is as if there were a single intermingling of light, which existed in three mutually connected Suns. When we look at the Godhead, the primal cause, the sole sovereignty, we have a mental picture of the single whole, certainly. But when we look at the three in whom the Godhead exists, and at those who derive their timeless and equally glorious being from the primal cause, we have three objects of worship.

As man he was baptized, but he absolved sins as God; he needed no purifying rites himself—his purpose was to hallow water. As man he was put to the test, but as God he came through victorious—yes, bids us be of good cheer, because he has conquered the world. He hungered—yet he fed thousands. He is indeed “living, heavenly bread.” He thirsted—yet he exclaimed: “Whosoever thirsts, let him come to me and drink.” Indeed he promised that believers would become fountains. He was tired—yet he is the “rest” of the weary and the burdened. He was overcome by heavy sleep—yet he goes lightly over the sea, rebukes winds, and relieves the drowning Peter. He pays tax—yet he uses a fish to do it; indeed he is emperor over those who demand the tax. He is called a “Samaritan, demonically possessed”—but he rescues the man who came down from Jerusalem and fell among thieves. Yes, he is recognized by demons, drives out demons, drowns deep a legion of spirits, and sees the prince of demons falling like lightning. He is stoned, yet not hit; he prays, yet he hears prayer. He weeps, yet he puts an end to weeping. He asks where Lazarus is laid—he was man; yet he raises Lazarus—he was God. He is sold, and cheap was the price—thirty pieces of silver; yet he buys back the world at the mighty cost of his own blood. A sheep, he is led to the slaughter—yet he shepherds Israel and now the whole world as well. A lamb, he is dumb—yet he is “Word,” proclaimed by “the voices of one crying in the wilderness.” He is weakened, wounded—yet he cures every disease and every weakness. He is brought up to the tree and nailed to it—yet by the tree of life he restores us. Yes, he saves even a thief crucified with him; he wraps all the visible world in darkness. He is given vinegar to drink, gall to eat—and who is he? Why, one who turned water into wine, who took away the taste of bitterness, who is all sweetness and desire. He surrenders his life, yet he has power to take it again. Yes, the veil is rent, for things of heaven are being revealed, rocks split, and dead men have an earlier awakening. He dies, but he vivifies and by death destroys death. He is buried, yet he rises again. He goes down to Hades, yet he leads souls up, ascends to heaven, and will come to judge quick and dead, and to probe discussions like these. If the first set of expressions starts you going astray, the second set takes your error away.

All examples of His human weakness, of which Muslims often like to point out to justify their belief that Christ is merely a “prophet,” can be soundly defeated by His divinity in the very same category.

God thought it wrong to do men good against their will but right to benefit those with a mind to it. For this reason, he acts like a schoolmaster or doctor, taking away some ancestral customs, allowing others. He yields on some trifles which make for happiness, just as physicians do with the sick to get the medicine taken along with the sweeter ingredients artfully blended in. A departure from time-honored, customary ways is, after all, not easy.

It was dangerous for the Son to be preached openly when the Godhead of the Father was still unacknowledged. It was dangerous, too, for the Holy Spirit to be made (and here I use a rather rash expression) an extra burden, when the Son had not been received. It could mean men jeopardizing what did lie within their powers, as happens to those encumbered with a diet too strong for them or who gaze at sunlight with eyes as yet too feeble for it. No, God meant it to be by piecemeal additions, “ascents” as David called them, by progress and advance from glory to glory, that the light of the Trinity should shine upon more illustrious souls. This was, I believe, the motive for the Spirit’s making his home in the disciples in gradual stages proportionate to their capacity to receive him—-at the outset of the gospel when he performs miracles, after the Passion when he is breathed into the disciples, after the Ascension when he appears in fiery tongues.

We were born after the full revelation of God, when the theology was worked out without error in the Orthodox Church. We have all that we need for our salvation, through the Scripture and His Church, and so when we go to God upon our death, there is no use to plead ignorance.

The power of the Holy Spirit

Overall, On God and Christ was a short but sturdy read that may be best suited for those who are already in the Orthodox Church since it features mostly theological teachings instead of practical matters of the faith. It was a suitable book for me to begin to wade into theology.

Learn More: On God and Christ on Amazon

The fact that God's dispensation of grace is gradual, not all at once, can be frustrating. But ultimately, it's for the best.

In the West, due to our lack of faith in God, it appears that we are rapidly advancing from the stage of disorder into disintegration

Today's Church reading from the Word of God (thoughts by Saint Theophan the Recluse) reminds us that: "impiety is an incorrect relationship with God, or complete forgetfulness of God, to which also belongs unbelief in the existence of God and in His Providence for creatures.

We have all that we need for our salvation, through the Scripture and His Church, and so when we go to God upon our death, there is no use to plead ignorance.

the infinitely wise Teacher has a lesson plan for you to complete a course that will take the remainder of your life.

Wisdom, who is the Lord. Courage is one of the general virtues begotten by Wisdom. Courageous people enrich others in virtue.
Proverbs 10:3-4 Orthodox Bible commentary

As Christians we are to love our Lord with all our heart, to turn away from our sinful ways, and to prepare our hearts for the coming of our Saviour.