On Return Of Kings yesterday I posted the The 9 Ugliest Feminists In America. I wanted to make an objective statement about the physical appearance of America’s dimmest feminist minds. I didn’t challenge their views, talk about rape, or say that women should be denied suffrage. No matter, because the feminists went apeshit and melted the server down. I’ve never experienced anything like it.

The who’s who of the Jezebel junta took a break from being oppressed by the patriarchy to share their thoughts.. 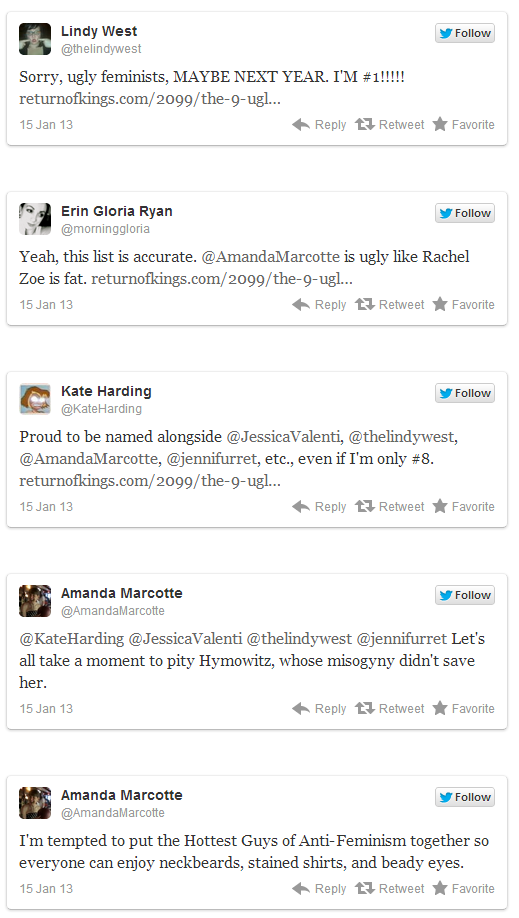 Amanda seemed to have been especially wounded at my jab that she was injected with testosterone in the womb. There was also a tweet from Feministing to it’s 64,000 followers, “congratulating” their leader Jessica Valenti for making the list, but it has since been deleted. I also mustn’t forget the tweet from—I kid you not—a “fat studies scholar.” I believe it involves studying feminism while simultaneously eating cupcakes.

Wonkette, which I don’t believe is still operational, had an extensive post published soon after the initial tweet…

Roosh is a cool dude. He is a pickup artist Mens’ Rights Activist who will take a break from boning all the world’s hottest women to teach you how to rape Ukrainian girls or something.

But Roosh is sad we guess, maybe his pageviews are not everything he would like them to be, but he has come up with a surefire way to get all the sweet honey clicks, and that is by ranking all the ugliest feminazis, obvs. So Sandra Fluke is obviously a grotesque monster (just look at her!) plus she makes you pay for her birth control.

On the blog of Rebecca Watson (the feminist who tried to bring down great man Richard Dawkins after a nerd hit on her in an elevator), one of her writer’s tried to make an insult…

Basically, a dude who is so handsome he can only be depicted as a cartoon lest everyone die from orgasm should his actual photo ever be published, took a list of outspoken feminists and declared them ugly and the world was like ‘WHOA! THAT’S SO ORIGINAL AND DEEP! NO ONE HAS EVER CALLED FEMINISTS UGLY BEFORE! You, faceless cartoon man whose legal name is totally definitely Roosh IRL because why would you hide behind a pseudonym, are a true hero!”

A simple Google image search on “roosh” would have quickly led her to my true identity: 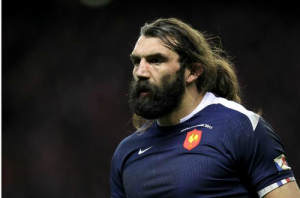 No feminist outrage is complete without the house male feminist defending his masters. Here is a man, a word I use with great reluctance, whining that he didn’t make the list…

..there is not a single feminist man in the entire list. I feel so very left out — not to mention offended on behalf of my gender.

He outdoes himself, however:

Yep, every single woman listed is in fact beautiful.

Every single woman listed is in fact not. How deep does your balls have to be buried in your blubber folds to find this woman beautiful:

Mangina par excellence Hugo Schwyzer also whined about not being put on, no doubt in order to maintain his supply of stretched feminist vagina.

Someone asked me why I would resort to such childish name calling. It’s the same reason I call out cockblockers. The cockblocker already cost me the girl so there is no real physical gain in confronting her, but my words hurt her and ruin her night. Bitching her out means she will probably suffer the same fate as me: having her night disturbed. That satisfies me.

Thanks to the feminist movement, America is lost for me and a lot of other men. Nothing positive will come from America’s contaminated womb in the next couple of decades, but like confronting a rude cockblocker, I want to offend them. I want them to know that there is a man ape somewhere in Eastern Europe whose words can cause the feminist sphere on Twitter to lose their shit. That’s all. I don’t want to talk to them or argue with them, and I don’t want to debate them. Many men smarter than me have provided reasonable and logical arguments that unfortunately are like planet kryptonite to a feminist. They cannot be convinced and they cannot see reality. They don’t even possess enough math skills to read a chart with basic statistics. The only two ways to annoy them is to mock rape or call them ugly. Anything else and you’re wasting your time.

I wanted to send a message that I consider them unattractive women. They received that message and were wounded by it, enough to get their followers to throw hate at me all day. Happiness for me as a man and as an American is helping men get what they want out of life while pissing off the very women who are contributing to America’s horrendous cultural and female decline. Judging by that standard, I gotta say that yesterday was a good day.