My travels through America continues. In this video, I share scenes from Rhode Island, Connecticut, and New York City.

Join me on my tour by visiting Roosh Live for a full listing of all cities I’ll be in. Subscribe to my Youtube channel to catch future travel videos.

Roo$h
Regarding Payment Processing-
I’ ve mentioned it before but you should always Sign Up for PP using a Proxy title as a Company and use a generic service.
Eg; Bill as “Worldwide Products” for “Consultation”

Square(Up) and others are too politically correct and use 3rd party “risk assayers” which will flag you as “possible hate agent”.

Best of Luck will your Tour!
W

You nailed it with the purpose of the sodomites. They’re pagan priests. That looked like some first century parade for Athena.

Indeed Bryce!
And its so much worse than we imagine~

On July 2nd the pagan ‘Passing of the Torch‘ showed the Statue of Liberty in the Athenian tradition of Zeus. Temple prostitutes of Hermaphroditus or Babylon ‘sodomites’ are the FALSE pagan depiction of the similarly ‘corrupted’ Western world… Its daunting symbology… BUT ‘they’ can not win the long run. 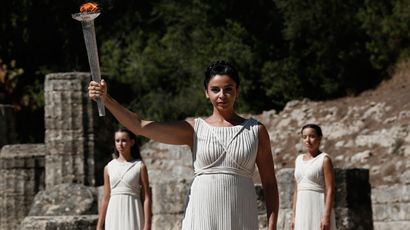 1- Steve Jobs (not his REAL name) did NOT “Cast Spells” for Apple
2- Chelsea Handler did NOT have 66 <- episodes 'censored'
3 – The Epstein investigation (like FISA) )will NOT end in prosecution of Obama-Clinton etc
4 – The 'funeral envelopes of doom' are FAKE -The elite world does not play out such foolishness ON CAMERA unless they want you involved in the soap opera speculation of it all.

What is real then?

We await a pleasant scenario of Natural Disasters plus WW3 to take down the USA and rebirth a hellish Global World Order.

Enjoy your loved o9nes and simple life enjoyments.
It will all evaporate soon.

All thins must pass.
And thru Christ we will then return to God! 🙂

ps – For those scared away when I write with 'Christian overtones' … Think of it this way… The answer to all the chaos around us….. is the OPPOSITE of pagan priests and their satanic NWO crap… Does anyone here understand this???! 🙂

Oh shut up you idiot.

Because Obama is not involved. Maybe Clinton. I wouldn’t be surprised if Trump is also involved as well.

to add to it, the fag trend has hit pakistan

Roosh while on your cross country trek, check out these folks if it’s possible. The ‘Twelve Tribes’ community. They’re scattered about NY, Mo, Ca, Cz and are Christian (KJV) following. I’ve seen them first hand. The girls are trad and marry young. Long hair, no tats, multiple home schooled kids and the dads work the organic farms. They’re self sufficient and off grid as much as possible. I got invited to a free Sabbath night dinner once after visiting one of their organic shops. I was awed. The community is like a time warp where they look like they just walked out of the Bible. They make their own clothes, live simple. It’s beyond Amish. The number of kids amazed me. The sex roles are very trad with no rainbow stuff. Interesting thing is they have no connection to or interest in money. They don’t even talk about money. With the self sufficiency, if there were ever a disaster, these folks would be around long after the grid collapses.

Sounds like a nice traditional community, but unfortunately they’re Protestants and living in error. If you want to see traditional worship and a place where people “look like they just walked out of the Bible” visit a traditional Catholic parish or an Orthodox Church. Living a Christian life isn’t just about removing yourself from the world (which is a specific vocation, hence monasticism) and living traditionally. It’s about doing those things within the context of the Church (the body of Christ) and being obedient and virtuous. Protestantism is inherently revolutionary, relativistic, and disobedient to the Church founded by Christ and His Apostles.

I wouldn’t necessarily peg the Twelve Tribes as being Protestant. Some I met were raised RC and others were across the spectrum. The Tribes live a lifestyle that tries to emulate the original followers of Christ during his lifetime and shortly after his crucifixion which predates the church. They live very simple and rudimentary, kind of like a monastic simplicity where there is an apartheid from the outside world. The main difference being that most tribe members form monogamous families within a tribal style community support structure. And none of the tribe that I met had more than one wife. For the men in the tribe, their wives were all so humble and trad. They produce and discipline their children basically and I didn’t see a bit of materialism where the woman manipulates the man for personal material gain. There isn’t much in the way of material excess and non useful posessions there. There isn’t even jewelry around the place. Just home made clothes, garments, hand me downs and ag and farm infrastructure projects the men work on – as the women scurry between the large kitchen and the home (farm) schooling area and then back to TIT FEEDING their offspring. That’s right, TIT FEEDING. Every time I leave the place I can’t stop thinking and saying “man I love those people”. A number of the women too are hands on with different skill levels at midwifery. I have no problem with a woman who is learned and skilled at midwifery.

Still they’re monogamous. They’re doing good, or GREAT for a monogamous group. Still I preach that if a tribe is to survive in this latter day, they need the ROCKET ENGINES of patriarchal polygyny to propel their reproductivity. If I were in the Tribes, I know I’d be constantly itching to take on a second wife – and I’d be preaching to them the virtues of patriarchal polygyny. Still they’re pretty much monogamous. I still love em though. If Roosh looks around, they have these Organic deli’s near their farm communities with sandwich bar, matté drinks, the works. They’re worth checking out. An experience.

Also in the west, there’s this super cool community of polygamous cave dwellers called ‘Rockland Ranch’. It was built by Mormon polygamists fleeing persecution who carved out dwellings in a sandstone butte near Moab Ut. The place has a number of families who garden, survive, raise families. Very tribal. Very cool.