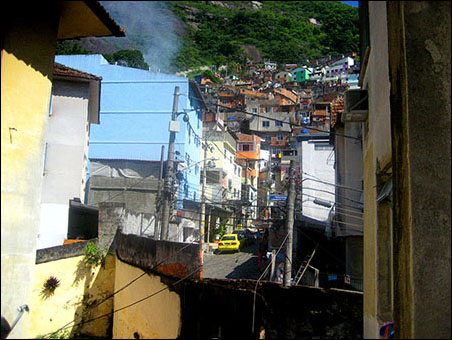 View from my kitchen

I live on the edge of Favela Dona Marta, a “pacified” slum where police operations two years ago have removed all drug gangs. There is a police outpost inside the favela and also one right outside, and it’s not uncommon to see them traveling to and from the posts with guns drawn. Once I saw a officer walking alone with a gun in each hand as if he’s seen too many Hollywood action movies, but not once did I hear a single gunshot for the first six weeks I lived there.

One night I was trying to fall asleep around 3am when an explosion went off. It seemed similar to the fireworks that the teenage boys usually set off so I thought little of it and went to sleep.

Six hours later I woke up to the sound of a helicopter circling overhead. I’ve seen helicopters before but it was so close to the ground that it felt like something out of a Vietnam war movie. The blades made a very intimidating and ominous sound, suggesting that any attempt at escape would be impossible. I looked outside my window and saw a black helicopter with the word “Policia” written on the side. It climbed up the hill and then there was a quick burst of gunfire followed by small explosions that created big balls of smoke. Then silence.

On the other side of my window in front of the building there was a tank with the BOPE insignia and fifty officers mingling nearby with their M-16 rifles. BOPE is the elite special forces of Rio that is basically a war arm of the police. They get called for special protection missions and also to extract suspected gang members. They’re so efficient at killing people, including innocents, that human rights organizations have complained about their “shoot first, ask questions later” policy and alleged use of torture during interrogations. Basically if BOPE gets called there will be loss of human life.

A plains-clothes man with shorts and a wife beater seemed to be directing the officers. He had a walkie-talkie in his hand. Maybe an informant? Then the helicopter began firing again. The soldiers started up the tank, made a terrifying war cry, and started running up the hill behind it. The helicopter continued to circle overhead. Here’s the exciting footage I managed to catch before I hid in my closet and curled into a fetal position:

The guys came back down, regrouped, and then went in again an hour later. I didn’t understand why they repeated the same procedure. Was it a training exercise or an enemy they simply could not take out? I got a little excited about living in the middle of an urban combat zone and imagined how many panties I’d make wet by the telling of this story if I somehow survived. Then my Brazilian roommate came home and I asked him what the fuck was going on. “Oh, they’re filming a movie.”

I wasn’t the only person who missed the memo as there was a big dustup about everyone thinking it was the real thing.

Turns out they were filming Tropa Elite 2, a follow-up to an excellent movie. “I saw the filming of Tropa de Elite 2 because it was right outside my place.” I’ll take it. At the end of the shoot they took a crew picture right in front of my gate. My humble shack is famous. 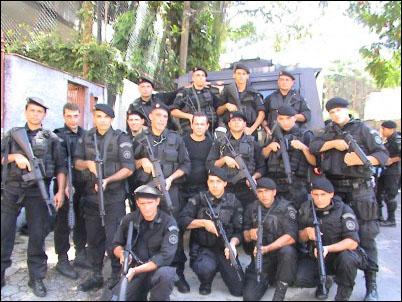 POSTSCRIPT: I got body searched by the regular cops two nights ago while walking home (second time it’s happened to me in Brazil). It included a very rough crotch inspection. As much talk as there is about America being Big Brother, I’ve never been searched in the States. On the bright side, Brazilians don’t have tazers—if you give them lip they merely beat you with batons.