Minas Gerais is located in the nortwest of Rio de Janeiro State, and easily accessibly by bus. Known for its cheese, pork, and women, I decided to have a little look before leaving Brazil. I visisted four cities in two weeks. 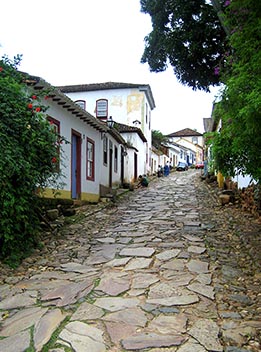 Tiradentes is a tiny colonial town named after a famous dentist freedom fighter (the name translates to “Tooth Puller” in English). It’s located about five hours by bus from Rio.

The town has a big tourist side so you’ll find a lot of cutesy antique, chocolate, and artesanal shops. There is a peaceful little river that snakes by the main square and a tiny coffee shop with only two tables. Street signs cannot be found. The colonial arquitecture, peacefulness, and safety made it seem more like I was in Europe than Brazil, so it’s no surprise that on weekends couples pour in for romantic walks down its stone-lined streets. There are also nearby hiking trails if you’re into that sort of thing.

There is absolutely nothing here for the single man, though it’s a nice break from city life. Come between Sunday through Wednesday for maximum isolation.

If you insist on talking to girls, find a club in the nearby city of São João del Rey. It’s only 30 minutes away by bus, but you’ll probably have to catch a cab back afterwards.

Where to stay? There are a couple dozen pousadas here and I can’t really recommend the one I stayed at due to its horrible foam mattresses. Bargain during weekdays and be sure to make a reservation if you come during the weekend. 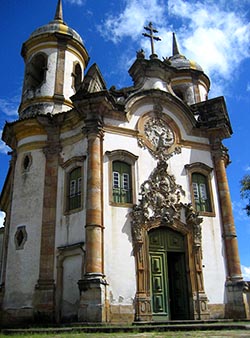 Four hours away from Tiradentes is Ouro Preto, another colonial town with more arquitectural goodness for your digital camera. There is a large university here so you have more options for girl watching, but I didn’t see anything spectacular. Surprisingly there are tons of fat girls even though the city is incredibly hilly (it’s possible that the fatties I witnessed were tourists).

The city reminds me a bit of Valparaiso, Chile, but smaller, prettier, and safer. On the downside it has very limited nightlife options and is extremely touristy. There is one club near the main square but it’s full of college kids, and the bars are of the sit-down variety. Day trips can be made to other colonial towns nearby with Mariana being your best choice.

Where to stay? I stayed in the Pousada Sao Francisco de Paul, a hostel with rustic private rooms. It’s not particularly good value but it’s close to the bus station so you don’t have to take a taxi.

A ways off in the northern part of the state, Diamantina is another colonial town that receives far less tourists than the others in Minas (except for its Carnival, which is supposedly the best in Brazil). Within ten minutes of arriving I knew it was a special place, and told the taxi driver upon leaving four days later that I’d like to grow old here with my Brazilian wife. It’s safe with a small-town vibe, but during the day streets feel alive with animated people going about their business. 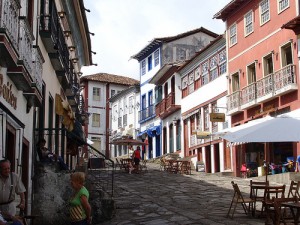 There aren’t many girls but the ones that come out of hiding during the day can be very beautiful. Supposedly there is a university on top of some hill but I didn’t bother to check it out because of my short stay. It’s here that I realized how relative beauty is. Seeing a girl who’s a 6 on the streets got my complete attention, though in Rio I wouldn’t have noticed. That’s actually a problem in cities: you’re surrounded by so much beauty that you don’t want to settle down until you get a bonafide hottie, yet in Diamantina I’d wife up the first 7 that was down. (Is city life constructed to make you less happy when it comes to finding mates?) If I lived in Diamantina and built roots, I’m confident I’d get something very decent.

There is not a whole lot to do here, so come if you want to relax, read, or get some work done without other tourists around. The value here is very good, as food and lodging is the cheapest of the other colonial cities.

Where to stay? I highly recommend Pousada Dos Cristais. For only 70 R$ per night I stayed in a very large room with a balcony. The staff is very friendly and there are two cats.

These colonial towns are great to relax in when you want to get away from the dirty cities, but are horrible for talking to girls. Overall they’re definitely worth a visit.