Pipa is a resort beach town in between Natal and João Pessoa, up in the north of Brazil near it’s shark-infested most eastern point. I planned to stay for only two nights but got sucked in because of the nice beaches, laid-back nightlife, and relatively cheap accommodations.

Before Pipa I was in Natal, a generic but safe city built around huge sand dunes. There I paid $35 to take a tour of some northern beaches in a dune buggy along with two other Italian tourists. During the tour we stopped every 15 minutes at some tourist station (it’s a trap!) where we had the opportunity to overpay for food and souvenirs with dozens of other tourists, mostly Brazilians vacationing inside their country.

The most irritating stop was in the middle of an enormous dune that offered impressive views of sand and ocean. Even though it was an inhabitable piece of land, there were three guys waiting right there on top of the sand mountain. One was selling snacks and the other two were selling photo-ops with their exotic animals, a bright green iguana and some sort of marsupial from the Congo. Tourists from buggies already parked paid a buck or two to have the poor creatures placed on their necks while photos were taken, screeching at the animals’ movements on their bodies.

I had a feeling the dune buggy drivers were getting commissions for stopping at every single tourist trap. This was later confirmed at lunch time when we were taken to a restaurant in a ghost town and asked to pay $20 for an all-you-can-eat buffet without any other options nearby. Turns out the drivers eat for free if they bring tourists to the restaurant, an ingenious business ploy by the owner.

I was unsatisfied with the tour. The fun seemed to be driving the buggy instead of riding in the passenger seat, so a week later in Pipa I jumped at the chance to rent one. It was a bit expensive at $110 for the day, but for several days prior I ate cheese and bread sandwiches for dinner, drank cheap Skol beer instead of caipirinhas with Sagatiba, and sold my body on the street, all to cushion the blow to my budget. 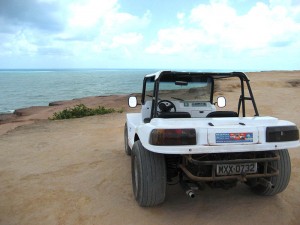 The hog (click this photo and others for bigger size)

My biggest fear was getting lost. The map from the agency was like one you’d get when entering an amusement part—definitely not drawn to scale. But turns out I didn’t even need the map. In my buggy I followed the water and it took me down well-worn paths of buggies before me, alternating between sand, rock, and dirt. I was getting the hang of driving the beast and ready to tackle more challenging terrain to see what it was made of. 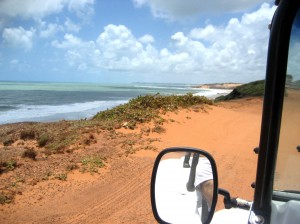 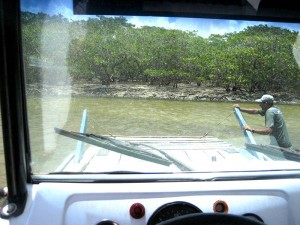 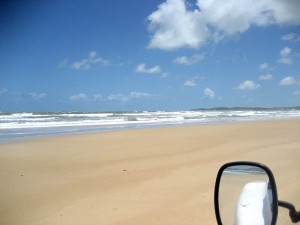 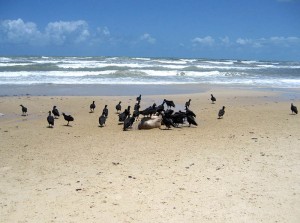 Birds feasting on a dead hippo

I passed a kitesurfing area and flew down the beach going what I guess to be about 40 mph. There was not a soul around and I enjoyed the isolation from tourists, vendors, and crippled 10-year-olds begging me for money. But then the beach got narrower until finally I was wedged between rock and ocean with a shallow pool of water about eight inches high blocking my path. I had a feeling I could blow through it but high tide seemed to be rolling in and I didn’t want to take a chance.

I backtracked a couple miles and found what seemed to be an alternate sand road going up a steep hill. The sand was thick and unruly so I backed up a good ways to get a running start. I slammed on the gas and flew up the path for the first thirty or so yards, but the buggy abruptly came to a stop with the engine still screaming. I tried to reverse but it wouldn’t move. For five minutes I sat there going forward, backward, forward, backward, forward, backward. I stepped out of the buggy and noticed that I dug the rear tires a third way into the sand, with the muffler literally resting on top of it. I was hopelessly stuck, in the middle of nowhere. 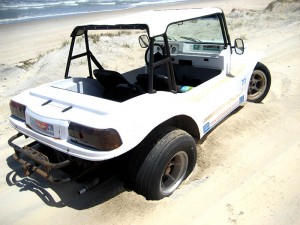