The first thing I thought of was the $1,000 deposit that I authorized the agency to put on my credit card. I knew if I called them to say I fucked up and got the buggy stuck they’d want to charge me the whole thing or at least a big chunk of it.

I had a cell phone but the balance was $1.50, enough only for a three-minute conversation. Even if the agency wouldn’t eat my whole deposit, I had no idea how to direct them to where I was. Yeah I’m by some beach, partway up some hill, near some birds feasting on a hippo carcass. It would take multiple phone calls of several minutes length.

You really feel alive when the stakes are raised. I’m thinking about the $1,000 while trying to figure out a solution at the same time. My instinct was to panic but I’m a sensible man so I decided to use my brain.

After two minutes I started to panic and tried to push the buggy out myself. I got in front of it, grabbed onto the oily railing, and started pushing as hard as I could. Of course it didn’t move.

If only I could push and hit the gas at the same time! I got in the buggy, punched it in reverse, then placed a big bottle of water on the gas as I removed my foot. I stepped out and with my left hand pushing the bottle down on the gas, I used my right arm and shoulder to try and push the machine. It still didn’t move.

I studied the buggy and figured that three or four guys could probably push it out. Then I came up with the idea to find the nearest town and hire a few idle teenagers to help me.

I got on the beach and started jogging. I was hoping there would soon be civilization with tow trucks, gas stations, and a McDonalds for a double cheeseburger snack. Finally after 30 minutes of running a small fishing village emerged in the distance.

I approached the town slowly, catching my breath, and noticed people on the beach staring at me like I was the Yeti emerging from a wintry forest. I saw a handful of guys lingering near the main square and started rehearsing what I would say to them in Portuguese… “My buggy is stuck… can you help me?… I can give you that paper money.”

Before I had to say anything a buggy approached. It must’ve crossed the shallow water that I chickened out on earlier. I flagged him down and the first thing he said was, “Is that your buggy out there?” I nodded and he let out a chuckle. Then he told me to hop in, saying he’ll help me get it out. For the rest of the day we’d communicate in Portuguese.

He introduced himself as Roberto. Turns out he drives around tourists like on the tour I took in Natal. We went into the village and stopped by his house first. There I met about eight or nine members of his extended family, and for most of them this was the first time they had ever met an American. Their house was spartan but comfortable, with multiple beds to a room and religious Jesus statues on every table. I answered their curious questions and they complimented my Portuguese, saying my accent is southern, from Rio or São Paulo. I assumed that the books I was learning from gave me the southern accent.

I told them I studied every day and they asked me why. Problem is I’ve never had a good answer to why I’m learning a language. I usually say, “I want to be a cultured person,” but truth is I like the sense of accomplishment from having a conversation in a different tongue. Being able to communicate with people you’re not “supposed” to communicate with is like having a superpower, and a good conversation motivates me to keep studying to better express myself for the next conversation.

The wife handed me a glass of cashew juice (about as tasty as it sounds) and I pretended it was the best juice I’ve ever had in my life. Even though I’m still deathly afraid of getting a digestive illness because of my last trip to South America, I didn’t want to be ungrateful and ask if the juice was prepared in sanitary conditions.

Outside the house Roberto found two idle guys and the four of us hopped in his buggy. We took a backroad across some private farmland and twenty minutes later arrived at the sight of my mistake. While the three of them lifted the rear of each side, I pushed sand underneath the tires as fast as I could. Then Roberto took some air out of them, got inside the buggy, told us to push with all our might, and out it came. It didn’t take more than five minutes. 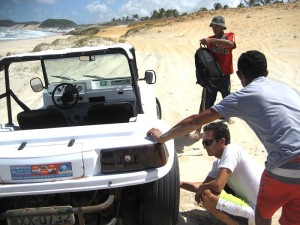 To add insult to injury, Roberto then effortlessly drove up the same hill I got stuck in. I asked him why I couldn’t do that and he said, “It takes practice.” I felt like an idiot, and imagined Roberto later telling all his friends about the gringo who got a dune buggy stuck in sand.

We went back to town and walked around the center to buy fish caught minutes before. He paraded me to everyone he knew and I answered the same questions repeatedly like a parrot, getting fast enough that people thought I was near fluent in their language. This is where I mention that if you meet a Brazilian girl who has never met a gringo before, she will be very receptive. 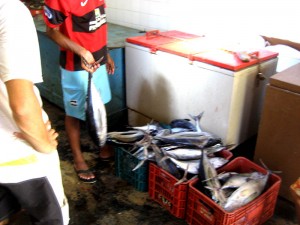 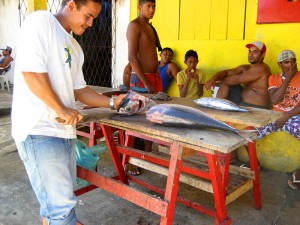 Roberto’s wife fed me lunch and introduced me to the Dona, or matriarch of the family. I didn’t ask how old she was but she let’s just say she has occasional dreams of the angel of death. She showed me her garden out back and how each plant treats a health condition. One plant was for heartburn, one was for impotence, and another was for eye problems. “You get the berry and then squeeze the juice right into your eye.”

“Yes, a natural pharmacy.” Then she gave me some random leaves to chew on which she said will help make me a more vigorous lover in bed. I snatched an extra handful when she wasn’t looking. 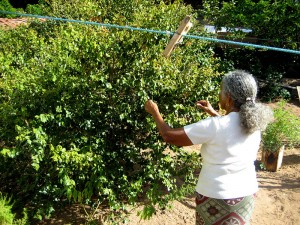 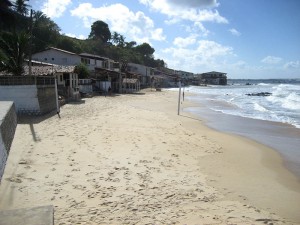 View from the Dona’s house

I left not long after and got back without problems by taking the farmland route, remembering Roberto’s advice to not let the tires spin too fast, among other tips. The things he told me was what you’d hear for driving in the snow.

Compared to the $35 tour in Natal, the costs for my buggy adventure was quite a bit more:

The problem with tours is that nothing really good or really bad will happen. You get a controlled, pleasant experience where all you have to do is push the shutter button. If there’s a problem then you simply sit and wait while your guide figures things out. Though I don’t like judging whether an experience was “worth it” or not based on how much it cost, this was one of the most interesting days I’ve had in South America. I experienced a tough problem, had to work my way out, and in the meantime connected with locals who weren’t already spoiled by gringos. There’s not a whole lot more I could’ve asked for besides a buggy blowjob (by a girl, not Roberto).

Unless there is a chance of something going wrong, it’s hard for me to get excited about doing it. I want to feel alive, and for that to happen there has to be some type of fear or anxiety in the back of my mind that things may not work out in my favor and that I may have to use everything I’m made of to succeed (or survive). This is why I’m not in the United States. It’s true that everything is harder down here, but the payoffs are that much sweeter.