My second night at Hotel Miami in Asunción, I went to my bathroom and saw this: 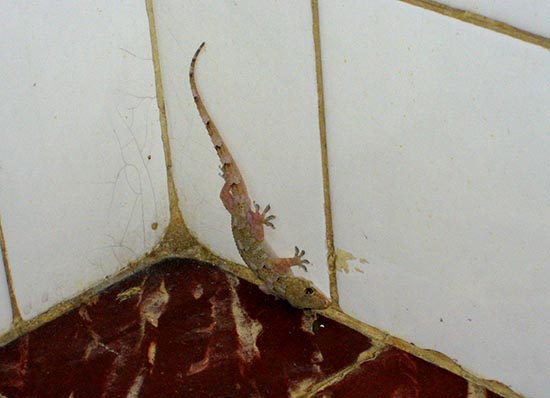 It was big and not afraid of me. I couldn’t find anything to kill it with except my room’s soft-cover bible, but if I failed to kill it I was scared it get mad and try to kill me, so I just closed the bathroom door hoping the problem would resolve itself. It did because I never saw the lizard again.

I was hyper-aware after that and a few minutes later I noticed a gigantic bug on the pillow of the twin bed next to my full size bed. I grabbed the bible and killed it without mercy. I felt sorry for the poor sap who was going to use that pillow thinking it was clean (like it was clean before). The six inch lizard was a sign I should have searched for another hotel, but I pride myself on adapting to tough conditions.

Pride never did me anything good.

I went to bed on Wednesday at midnight. I woke up around 4:15am with my hand touching something on my bed. I pushed it aside and settled into a new sleeping position. About four seconds later it hit me that THERE IS SOMETHING FURRY ON MY BED. I jumped up and turned on the light. It was a dead rat.

I freaked out like I’ve never freaked out before, flailing my arms and making whimpering noises as I run to the bathroom to wash my hands. I examined my body in the mirror to check for signs of rat excrement or bites. I’m cringing, shuddering, gagging as I think about where this rat touched me.

I covered the dead rat with sheets so I didn’t have to see it. The placement of the rat seemed too perfect, almost like it was a prank, but the door was still locked.

I wanted to leave the hotel immediately, but it wasn’t the best time to go walking around Asunción searching for a hotel. I consider staying awake until the sun comes up but there is that twin bed. I turn over the pillow and lay down. Two hours later I fell asleep.

I get up around 8:30am and start packing. Less traumatized, I uncover the rat to get a closer look. Turns out it’s not a rat—it’s a bat. 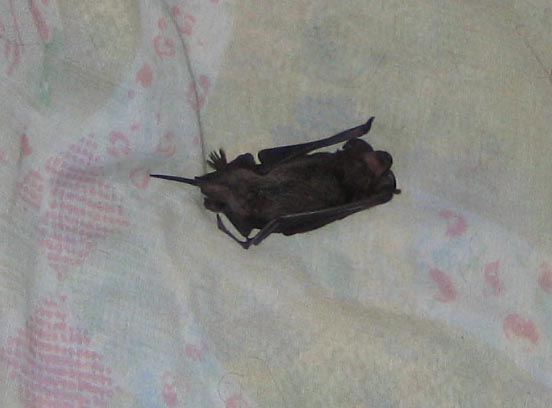 It was hanging from the ceiling and just dropped dead next to me. I’m not a superstitious man and I don’t believe in omens, but when dead bats start falling from the sky onto your bed, it’s time to get as far away as possible. I packed up and went to the bus station and booked a ticket to Ciudad del Este, a city I can cross over from into Brazil. I had two hours to kill so I went to an internet cafe at the end of the bus station.

My scientific knowledge kicks in as I’m checking my email and I remembered bats carry rabies. So I’m in this internet cafe multiplying the odds this bat has rabies with the odds it bit or scratched me while I slept. I’m sure I would have definitely felt it bite me and a check of my body in the mirror found nothing suspicious. I hit Google. The internet is either saving my life or giving me OCD, I’m not sure, but I found things like this:

Of the 25 cases since 1981 in which people contracted rabies in [the U.S.], 22 involved strains that could have come only from bats, and 16 had the silver-haired bat strain found in the Virginia man. Everyone in those cases died, including several children. But only one patient was aware of having been bitten. In the rest of the bat cases, the exposure was described as ”unknown,” though in many cases family members or patients themselves recalled that a bat had got into the house or workplace.

But that means one can be bitten by a bat without knowing it, something most people would find hard to imagine.

Now I’m scared. The thing with rabies is that when you find out you have it, you’re going to die. It’s also bad news that this bat was hanging out with a human. With the window closed it had to work to get inside instead of choosing to drop dead in it’s natural habitat. I hop in a cab to the private hospital and get the first of five injections. The consultation with a doctor and the first shot was $35. Getting the rabies vaccine has been the easiest decision of my trip.

Rabies prophylaxis is 100 per cent effective if given before symptoms appear. Link

I arrived in Brazil later that night, and stayed at a nice hostel that didn’t have more wildlife than a national park. It’s nice that traveling gives you such interesting and crazy stories, but I wish I did without this one.