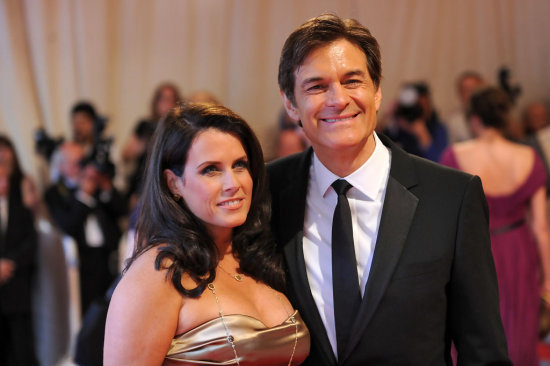 I recently traveled to New York City to appear on a segment for the Dr. Oz show which airs this afternoon in USA and Canada (see local TV listings or view the 30 second preview clip). In case you don’t know, Dr. Oz is a doctor turned daytime host for a show that is produced by Oprah Winfrey’s company Harpo Productions. Of course I expected to be the “bad guy” on the show, and knew they would ask me some pointed questions, but I could not anticipate how much of a massacre it would be. 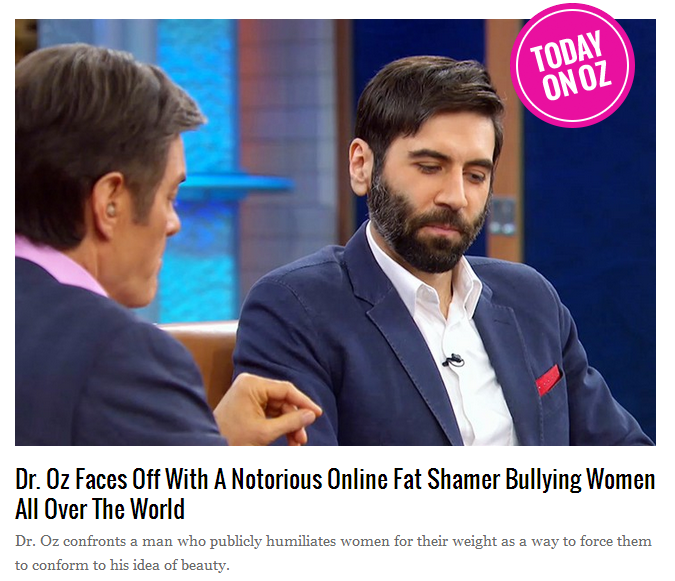 Several weeks ago I got an email from a producer asking why I organized fat shaming week on Return Of Kings. In a long phone conversation, I told her my thoughts and she remarked that they were more reasonable than she expected. She offered to fly me to New York City and put me up in a hotel to appear for a segment on fat shaming where I could share what I told her on national television. I knew my portrayal in this segment would be mostly negative, but that didn’t bother me since she was offering a platform to get the word out. I reviewed many clips of Dr. Oz on Youtube and he seemed like a sensible Turkish man who would let some of the truth shine through.

On the day of filming, the staff was extremely courteous and professional. I talked to a couple female producers who happened to be overweight and asked them, “How do you feel about me being on this show for fat shaming?” I believe that obesity is a serious problem, but I’m empathetic at the same time in that I don’t want to personally attack those who don’t attack me. As long as you are not pushing fat acceptance, or trying to claim that fat is beautiful, I will not bother you.

One producer said, “We just want you to share your perspective.” They smiled at me and seemed genuinely interested in what I had to say about fat shaming, and one even went so far as to offer aid in obtaining the loose leaf green tea that I desired (I avoid bagged teas whenever possible). From the behavior they showed me, it was safe to assume that I was about to have an honest conversation about the obesity issue on mainstream American television.

I was ushered backstage and did a microphone test for the sound engineer. There were several monitors above where I could see the studio set. I looked up at one and saw Dr. Oz introducing me. I was preparing to go on the stage with a slight smile, but that notion quickly evaporated when I heard the word “monster” and “bringing him out from the shadows.” Instantly, I knew I was walking into a trap. I looked around, half hoping for a hug or some assurance that everything was going to be okay, but realized that the staff who were so cheery earlier knew all along that they were ushering me to a public execution. They sedated me with niceities so I would not be mentally prepared for what was about to happen.

Strangely enough, all nervousness I had beforehand disappeared because the result was no longer in my control. I told myself “remember to breathe,” got a nudge, and was escorted to the stage. I shook Dr. Oz’s hand, the man who just called me a monster, out of instinct. The lights were bright but not in my face, making it hard to see the 200 people in the audience. I counted three cameras with teleprompters attached and didn’t know if I should look at them or not. My mouth suddenly felt dry.

Dr. Oz’s attack began by cherry picking the meanest quotes I’ve ever written and asking me to justify them. I got out my shovel, ready to work, but every time I climbed up the edge, Dr. Oz would push me back in by saying I was “screwed up” or offer some type of emotional outburst before wild applause by the audience. I have been to European soccer games with less emotion.

I tried to take the conversation out of feelings and into logic by claiming that thin women are objectively more attractive and that obesity is causing huge public health problems, but they specifically wanted to focus on me and my “hatred” and all the feelings I’m hurting. The debate was framed in a way to not bring up facts that went against the party line. As much as I love talking about myself, I wanted to discuss the issue at hand, but wasn’t given an honest opportunity to do so. 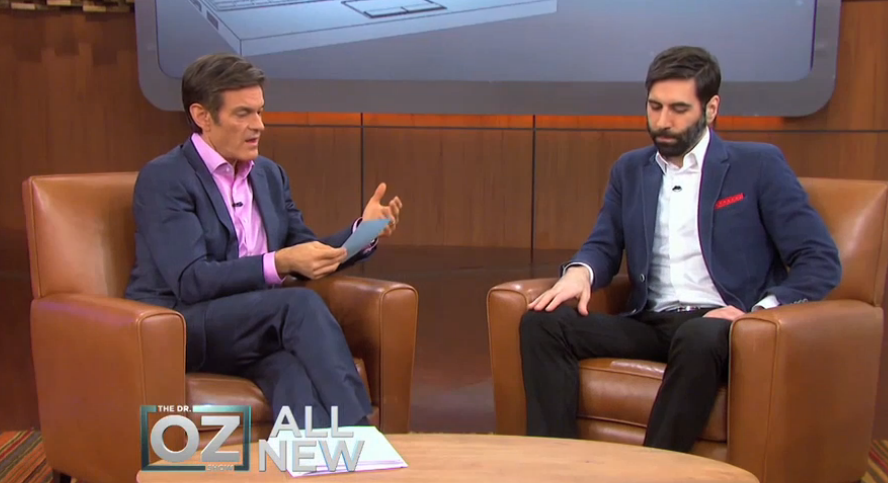 After frothing up the audience to despise me, Dr. Oz initiated the two minutes of hate. He found the fattest women in the New York area and put them on steel reinforced seats to insult me as they wished. The crowd cheered and applauded after each fat woman gave her prepared diatribe. It was at this point I started examining the crowd of mostly women. I made eye contact with a few to see if they would stick their tongue out at me or wag their finger, but they didn’t. They were motionless mannequins that waited for the flashing studio light to give a response.

While fat woman number three was yelling and pointing at me, I looked at Dr. Oz’s teleprompter, and thought how easy his job must be if all he has to do is read and pander to these women. It was a surreal moment for sure, to be hated by everyone in the room and be stuck in a rigged match where there was no way I could appear reasonable or even myself. I looked at Dr. Oz and wondered if he would cap it all off by punching me. It would make for good television, at least. 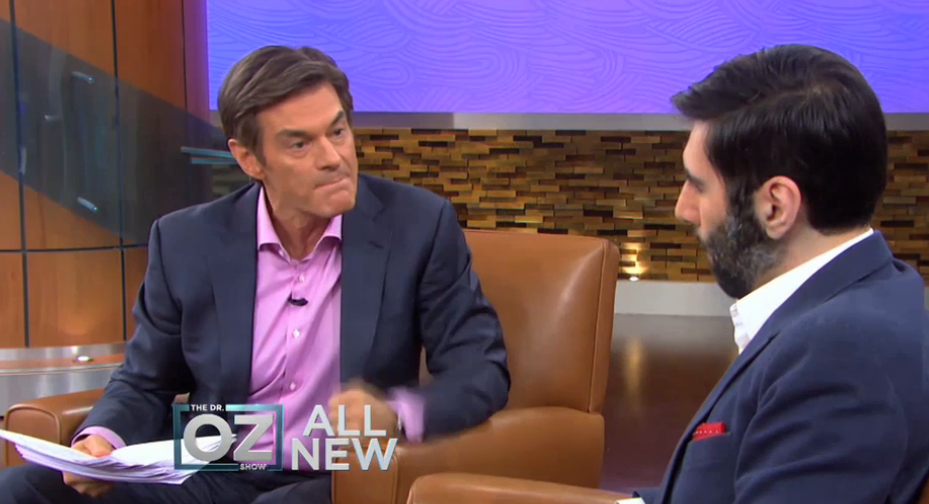 After fat woman number four finished her angry speech, I squeezed in a decent bit about how fat acceptance shortens everyone’s life spans, and I heard a gasp from somewhere as if what I said was shocking, and realized that my statement will probably be edited out. When it was over I walked backstage, said “Wow,” and burst into laughter, not because anything was funny, but because my body needed a way to release the hate that it was forced to absorb from over 200 people. The backstage hands didn’t even look at me. I saw the producer and went up to her. I had no instinct to be mad at her or even Dr. Oz, whose entire goal was to humiliate me. I thanked her for the flight and hotel and then left.

Two years ago I was on the Ukrainian version of Jerry Springer. They brought on a friend to betray me, a girl to falsely claim I stalked her on the street, a neo-Nazi who bragged about using weapons against sex tourists, and a girl who threatened me with a lawsuit. But in spite of all that chaos, I was given enough time to share my views so that many in the audience ended up agreeing with me after hearing what I had to say. The Dr. Oz show, on the other hand, was scripted top to bottom, making absolutely certain the “monster” could not win or even share his “perspective.” It was such a masterfully produced hit job that I may even hate myself after watching it.

I brought a friend along with me to the taping. In the dressing room before I went on, I couldn’t help but muse about my appearance:

Hundreds of years ago, I would have been a soldier, fighting battles to defend my country against invaders, or invading another tribe to steal their women and land. But here I am, with makeup on my face, about to talk about fat people, because now the world values entertainment more than anything else. They want singers and actors and famous people to make them forget about their boring lives, and even women we meet want the same. I was given some type of ability by god or nature so that I am wanted here right now in this building during this strange time of humanity, and so I will use that ability, and give everyone their entertainment.

Based on that standard, I succeeded. I gave 200 people in the studio, and soon millions more today, the raw fuel to feel anger, sadness, and outrage in the middle of the day, emotions they desperately want but which their otherwise unsatisfactory lives don’t provide them. I guess in the end I’m not that different from Dr. Oz. We have a different kind of jig we do in front of the camera, but in the end we’re still doing a jig, and in spite of the public show trial he subjected me to, of which the only thing missing was an execution at the end, I will continue to do my dance.

Read Next: How To Do Interviews With The Mainstream Media