I reprised my costume as Jesus for Halloween this year. With my hair 8-inches longer than last time and my beard bushier with almost a month of extra growth, the resemblance I had to Christ was eerie.

It started the second I stepped foot in the Metro.

A Muslim-looking man wanted to have his picture taken with me. I gave a serious look, like Jesus would, and made sure my large-print bible was in the frame of the photo.

On the Metro car a girl dressed up as a devil asked to take a picture with me as well. All the way down the car a group of teenage girls yelled my name (Jesus) and then rushed up to take photos with their camera phones. A girl dressed up as a referee, blowing her whistle loudly every two minutes, was next to ask for a picture. She was rather petite and I wrapped my arm around her so we’d be nice and close for the photo. Sober guys next to me gave me their respect with nods of compliment.

On my walk to the bar I had about four or five cars honk their horns. Guys hung halfway out the window yelling Jesus. I’d raise my arm to recognize their efforts to get my attention. A group of white people partying on a patio gave me a round of applause, and I blessed them with a hand motion that I practiced earlier in front of the mirror.

About a dozen or so photos were taken of me in the bar. I believe at one point a line developed. A girl I didn’t know bought me a beer, but didn’t want to talk. She just went to the bar, got my drink, and then left back to her friends. Countless Jews walked up to me, apologizing. The only time I was upstaged was when this asshole showed up in a robot costume with yellow lights and 80’s music blaring from his box head. He did breakdance moves and a crowd formed around him. I cried foul.

The attention got old pretty quick. I was just a cheap gimmick judged by my appearance and nothing else. People lost interest in talking to me if I stepped out of character.

At the next bar I gave off forced smiles with each Jesus yell. A group who wanted my photo made a demand that I pose with a thumbs-up sign. I declined. They kept demanding and I kept saying no. They made negative remarks out of earshot. Eventually I barely looked when drunk people came up to me with “JESUS.” I was much more receptive with calmer approaches like “Hey man I really like your costume. Is your hair real?”

Approaches fell into two categories: those that increased the likelihood of a conversation developing and those that decreased it. The parallel to game here was obvious to me.

I hesitated going home because I knew I’d have to walk through a sea of drunk people. The gauntlet. The attention from cars and and walking drunks was relentless. I wished I could take the costume off, or that I at least brought a band to put my hair back and be less Jesus-like. I kept my head down and avoided eye contact so I wouldn’t encourage anyone, but I still got a lot of “Hey Come here!” When I didn’t do what people wanted they got annoyed. “Jesus is drunk,” they’d say.

On the subway ride back I fell asleep, but people still tried to get my attention.

There is such a thing as too much attention, especially when the attention is identical. You get numb to it, and only respond to something original or different.

Postscript: Take a look at How It Feels To Be A Fat Chick by Virgle Kent, my wingman of the night. 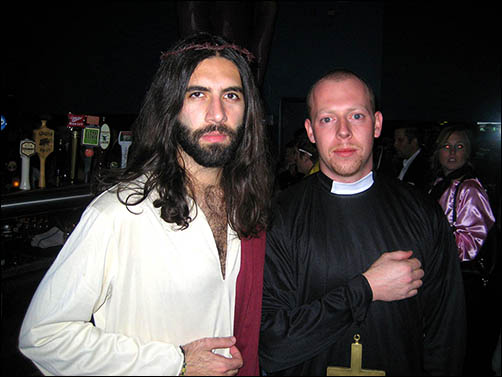