Are online threats serious or not? I’ve given this question a lot of thought after receiving dozens of threats in the past year, mostly as a result of the worldwide meetup outrage. Feminists will often falsely claim to have received death threats as a way to get in the news or solicit money donations, but what do you do when the threats are real and numerous?

Here is a representative sample of messages I received from the meetup outrage, many of which were direct threats:

If you make a stand against the establishment, it’s almost a certainty that you’ll get threats similar to the ones above. To know whether to take them seriously or not, you have to account for the context. Ask yourself the following questions:

The more you can answer ‘yes’ to the above questions, the more likely you should take the threats seriously. In my case, I could answer yes to the first three questions. It didn’t help that the dox of my family was perhaps the most viewed dox of all time, accumulating over one million views. 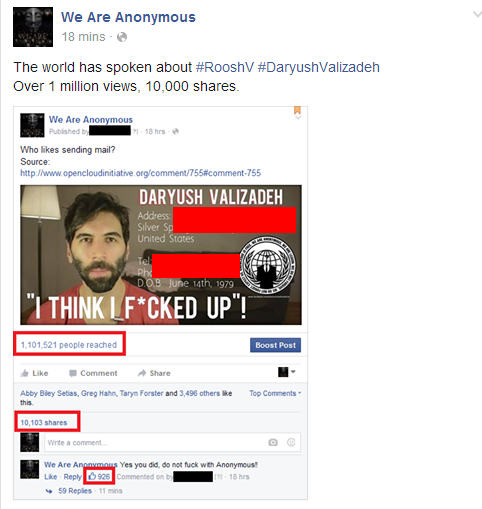 The only positive going for me was that the threats were spread out worldwide, so many of the individuals weren’t even close to the Washington DC area. Nonetheless, I hired an armed security service and had them stationed around the clock in front of my father’s home. I also put a flag on the address with local police to prevent a SWAT attempt. Thankfully, there was no successful attack against a member of my family or the home.

I’m counting on this happening again. My family is better prepared for it and the enemy no longer has the advantage of a surprise attack. If you exercise your free speech in a way that conflicts with the globalist agenda, I guarantee threats will come your way. If they’re serious enough, I recommend you remove yourself from the threat or hire security, at least until the dust settles and the mob moves on to another target. I’m definitely more prepared today for when the mob sets its sights back on me again.

My new book, Free Speech Isn’t Free, has just been released, and comes with three bonuses if you order before June 20. It gives an inside look to how the globalist establishment is attempting to marginalize masculine men with an agenda that promotes censorship and sterility. It also shares key knowledge and tools that you can use to defend yourself against leftist attacks. Click here to learn more about the book. Your support will help fund my operation.