I hesitated going to São Paulo for a while because of all the bad things I kept hearing. The traffic is horrible, it’s dirty, it’s too big, it’s too hard to know where to go, it’s expensive, etc., but I’m the kind of guy that needs to check things out for himself. Since I was close I had to stop by and visit the largest city in the Americas after Mexico City.

The size is quite impressive. A city like New York is separated by all those dirty rivers, but São Paulo is just one huge concrete salad. I still can’t get over it, and that alone is almost worth a visit. 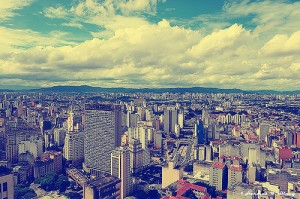 Someone in the forum took the trouble of breaking down the city so I won’t do that, but you can’t go wrong staying in the Vila Madalena area, which is reasonably close to a lot of popular clubs. The city is so big that cab rides at night can demolish your budget, so when it comes to lodging your main criteria should be how close you are to the nightlife (during the day you have the subway).

What I like about São Paulo over Rio is that you have your normal tribes, making it easy to fit in if you have a unique style. For example, there are many pseudo-rock clubs where I would do well at, but in Rio that was a lot harder to find because almost everywhere caters to the mainstream crowd. São Paulo has a ton of variety in types of clubs, bars, and restaurants for more specific tastes, while Rio is more of a one-size-fits-all type of place.

Unfortunately the girls are not as pretty as the ones in Rio. They’re lazier with their appearance while lacking the carioca sexiness. In Rio girls refuse to go out without heels, but in São Paulo I saw more of that Argentine trend of going out with dirty Converse shoes. That’s not to say that there aren’t tons of beautiful girls in São Paulo, but per capita I saw a decrease in quality. Also for a big city, there’s a surprising number of fatties walking around. I guess that puts a kink in the argument that people are skinnier in big cities because they have to walk so much.

A lot of Brazilians say that “São Paulo never sleeps,” but that’s not exactly true. In a city of almost 20 million people, there were two clubs listed on a popular nightlife guide for Monday. Tuesday wasn’t that much better. Until Thursday, you don’t have many options besides some sit-down bars. This is not Vegas, and it’s not New York either. On the bright side, girls are more curious about your gringo status and a surprising percentage speaks English. For some guys it will be easier to pull here than Rio.

I recommend you come for a weekend, not necessarily for the girls but just for the travel enjoyment. São Paulo is arguably the most important city in South America and it’ll definitely keep you busy and interested for a few days. My Danish roommate fell in love with the place and I understand why—it’s more progressive than Rio and simply has more to see.