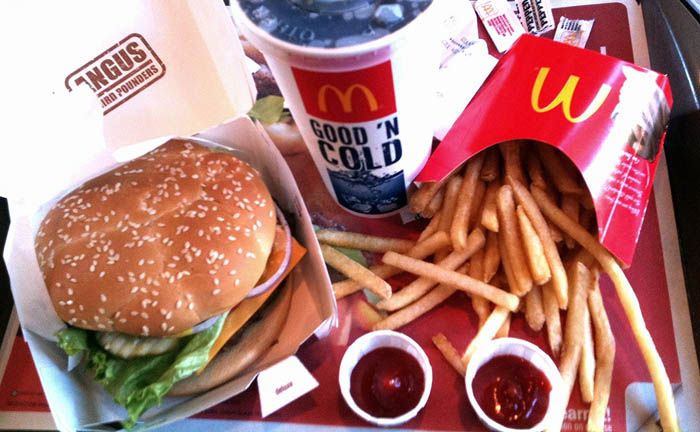 When I was in college, I would eat McDonald’s food at least three times a week. It never caused me indigestion or acute health problems. If I eat a McDonald’s meal today, fifteen years later, I feel digestive discomfort not only one hour after eating but also the following day. Maybe I’m more sensitive now, or maybe the recipes have changed, but it doesn’t go down right anymore, so I stopped eating it.

For a long time I’ve been having casual sex with women I did not emotionally care for, at least once a week. Indigestion was never a problem, but over the past couple of years, I have begun feeling negative effects after sex with women I don’t have feelings for, and it is making me want to avoid it just like I avoid McDonald’s.

Early in the summer I met a Polish girl on a weekend night. I convinced her to have a drink with me in a different bar and then two hours later I invited her back to my place. We had sex all night long. I had four orgasms with her, and each one felt immensely pleasurable, but the following day I had a weird feeling, almost as if I did something wrong. I ignored this feeling and contacted her again one week later. She returned to my apartment, and during the sex act I felt powerful bodily satisfaction. While I was laying my strokes inside her, I savored the fact that I could sleep with a girl 13 years younger than myself, but after my orgasm completed, and our bodies remained still, the same negative feeling came forth within me.

Like before, I pushed it to the back of my mind, and aimed for a second orgasm with her. She possessed the petite body I greatly desire, and so I felt even more ecstasy as I thrusted. The second orgasm came but the sour feeling returned, this time twice as strong. I looked at her body, attached to someone I didn’t care for, and she looked at mine, a man she probably didn’t care for either. I felt an urge to take a shower, as if to wash something off my body, but instead I lay next to her in silence, trying to understand where this discomfort was coming from and why it was interfering with something I’ve done so many times before, ruining the pleasure I worked hard to receive.

She had told me enough information beforehand that it was easy to put her in the appropriate box. She had traveled to Italy, Spain, and Portugal, countries that Polish females visit for sexual excitement. She didn’t “believe” in love. She wanted to focus on her law career. She became an atheist after her parents’ attempted to instill her with Catholicism. Most telling of all, she had a VIP card to the an international club in the city where foreign men can pick the easiest hanging Polish fruit from the tree, the same tree I have enthusiastically picked from in the past. She could serve no value to me besides the sexual, and the only chemistry we had was physical.

Her phone was ringing. It was still early, barely midnight. “It looks like your friend wants you to join at the club,” I said. She denied it, but twenty minutes later she was out the door, perhaps energized from the activity we had.

I sat alone on my couch for some time, thinking at how overjoyed I should be for experiencing easy orgasmic pleasure inside a body type which I liked, but instead I didn’t feel good, just like after eating at McDonald’s.

I was so sure that casual sex was the pinnacle of modern man that I moved heaven and earth to develop a lifestyle where it would be easy for me, and I have achieved that lifestyle based on being mobile, emotionally untethered, and an attractive catch to foreign women. And yet now that I have achieved this, I feel worse after each new girl I have casual sex with, as if I’m hurting my spirit in ways that I don’t understand, in ways that didn’t feel harmful in the past. I decided not to contact her again.

Two weeks passed and I was laying in bed, unable to push sex thoughts out of my mind. I thought of the Polish girl and how perfect she was at the task of making me feel pleasure. I got up and checked my phone to see if I still had her number. I was relieved to find that I did. A couple days later she was back in my apartment, and this time I was mentally prepared for the indigestion that was sure to follow. It was no longer a surprise, and I accepted this as the price I must pay until I wean myself off of women that my mind no longer wants.

Read Next: The 7 Stages Of Being A Player