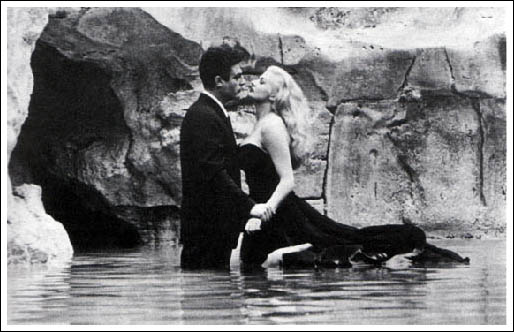 Don’t think that safety is being locked up in one’s home. Don’t do what I did. I’m too serious to be an amateur, but not enough to be a professional. A more miserable life is better, believe me, than an existence protected by an organized society where everything is calculated, everything is perfect.

La Dolce Vita is a movie that follows Marcello, a gossip rag writer who lives a fast-paced life off Via Venito in Rome. He has a pretty girlfriend, interesting friends, access to beautiful women, a decent job, and a dream of being a respected writer. “Now that’s the lifestyle I wouldn’t mind living,” I thought, halfway through the movie.

But things weren’t so great beneath the surface. His relationship with his smothering girlfriend was draining him, most of his friends were vapid parasites, the beautiful women had nothing to offer him but their beauty, and his job was wholly unfulfilling. And when his most respected friend—the only person who was in the position to help him—committed suicide, Marcello simply gave up and became the type of upper-class garbage that he wrote about, defeated by bitterness and cynicism.

This movie does not tie things up for you in a neat little package. It does not tell you what the sweet life is, what is right or wrong, and who is good or bad, but it does make you think about your own life. Am I living the life that I want? Is chasing my dream going to be worth it? Does it even matter if I reach success, whatever that is? Like life, the movie does not provide you with clear answers.

What did it mean when Steiner, the most successful character in the movie, kills himself and his children? Then I read that quote up top again. While the movie had many themes, I think the main one is entrapment. The main characters are trapped in some way by their desires or their lot, unable or unwilling to get out. So the sweet life is about being free? That’s part of it, but sweetness for me will not be sweetness for you. It’s the freedom to go for long-term meaning instead of short-term thrills, of not letting yourself to be held back, and of avoiding comfort. It’s the opposite of how most of us are living now, and this movie was made nearly fifty years ago. I suppose that makes sense because the human condition does not change.

Marcello thought being a respected writer would make his life better, but it’s really the attempt, trying to be something, that would have made the difference in his life. He was looking at the end result, comparing himself to other people, when he missed out on the journey to becoming one, the most important sort of travel that a human can make.