I hopped on a local bus back to Cusco after a visit to the Incan ruins of Pisac. The bus was packed so I had to stand in the aisle, and was faced with the serious decision of whether I should give ass or crotch to the gentleman sitting down next to me. I had to go with crotch because it was the best way I could hold on. Well, after about ten minutes, he fell asleep on my package. I could feel his head on my head. This being one of the top five highlights of my trip so far, I took a picture with my replacement camera (same one as before). 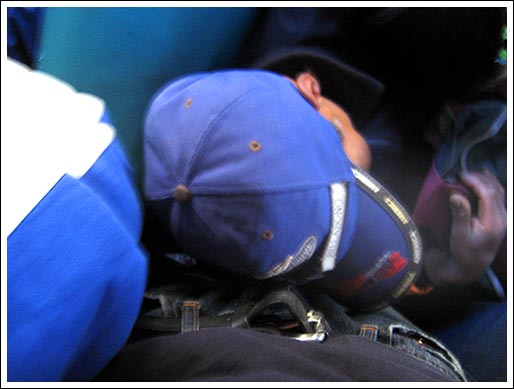 At one point he got up, lifted his head, stared off into space for five seconds and then went right back to my crotch. (They always come back for more.) I wanted to put my hand on his head for the photo but I estimated a high probability of conflict.