In A Dead Bat In Paraguay I wrote:

While packed in the procession dancing along with my friends, Skol beer in hand, I realized how much worse Carnival would be if I didn’t know anyone. I wouldn’t know which blocos to pick and there would no one to tell me what the Carnival songs meant. And I definitely wouldn’t know that the cloudy white liquid in plastic bags shaped like condoms were caipirinhas. For foreigners who come alone, I don’t see how Carnival can mean anything more than getting drunk with a strange crowd.

The main feature of Carnival is the street parties called blocos. It usually starts as a prosession led by either a truck full of speakers or a band in a train car. Samba is the music of choice. They stick one song on repeat (if you’re lucky they change it up after a dozen or so plays), and a crushing crowd follows the lead car. Then the car stops and everyone focuses on drinking and talking. That’s Carnival. 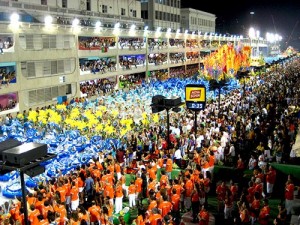 The result is you go to a bloco, have a few beers, pretend you’re having a great time to another culture’s song and dance, and then go to another one. Carnival is basically drinking cheap booze with the mob, to music you don’t know or understand.

The crowd is so thick that if you lose your friends you’ll have problems finding them again. It’s unbearably hot and sweaty bodies will be pressed against you like in a game of pickup street ball. While the actual blocos are free, you have to pay five times more for already crappy lodgings. Gringo gouging is common.

As for the girls, most hang out in huge groups of friends, and at the blocos they run into even more friends. While you can pick up in a bloco, they are not designed for you to do so. Do you think a quality Brazilian girl celebrating her country’s prime cultural event with a dozen friends wants to hook up with a gringo who doesn’t speak Portuguese? Most of the hooking up happens within the social circle, so if you have no Brazilian friends you’re at a huge disadvantage.

The clubs are mostly empty at night because everyone is so tired from drinking during the day. Therefore it’s actually much harder to bang a Brazilian girl during Carnival than any other time. I’ll be in Rio for my second Carnival and I’m already preparing for a week of no new poon or going out. I plan to get some writing done and it’ll probably be my most productive week of the year.

In fact I have yet to meet someone who can explain to me why Carnival is worth it, but of course no one wants to say straight-up that it blows. But it does. Besides the colorful samba parade, which is great but only a few hours long, Carnival is a steaming piles of marketing bullshit designed to part you from your money. You won’t get laid, you won’t like the music, you won’t like the crowds, and you definitely won’t like the cheap booze. I really like Brazil, but I dread another Carnival.

New Years Eve is more of the same but with a pretty fireworks display. Save your money.