The folks over at the Jerusalem Post have freaked out that I’m throwing a Stop Violence Against Women Happy Hour this Saturday, declaring me an “antisemitic pickup artist.”

Daryush Valizadeh is at it again.

More commonly known as “Roosh V,” the controversial pickup artist-turned alt-right figure gained media notoriety in 2016 when he attempted to host a series of worldwide meetups to promote “neomasculinity.” Last week, Valizadeh announced he will be hosting a happy hour in Washington, DC, on Saturday.

In recent years, Valizadeh has expanded his sphere of interest: Not only are feminism and “female entitlement” threats to western civilization, but so are leftists, Muslim immigrants to the United States, more traditional conservatives, and, of course, Jews.

Valizadeh wrote an antisemitic blog post in June 2017 titled “You Become What You Fight,” in which he blames the Jews for “creating feminism.”

“Who created feminism? Who pushes their ideas? The Jews,” Valizadeh wrote. “They were crafty, intelligent, persistent, and masters of propaganda. Their negative influence on Western civilization must be countered.”

He has published other antisemitic material as well.

They can whine all they want because at 7:30pm this Saturday, I will share the location of the Starbucks we’re meeting at on my Twitter (it’s within walking distance of Metro Center). Find me inside between 8-8:30pm to get the location of the main event, which will not be publicized online. Click here for full details.

Yes this is a real event. I will arrive to the Starbucks at 8pm. We will go to another bar at 8:30pm to eat, drink, and talk.

“I’m scared I will get doxed.”

As a man who has taken many large risks in life, I want to meet like-minded men who also like to task risks, though currently the risk for you to attend this event is rather small. Understand that I have it worst—I will be a sitting duck for half an hour to everyone in the metropolitan DC area who hates me and knows how I look like.

My best advice for men with sensitive jobs is to wear sunglasses and approach the Starbucks as if you were inching into a cold pool. Observe the surroundings carefully as you get closer. If the water gets too cold, withdraw momentarily. You only need to have a 30-second interaction with me to get details of the private venue.

“Isn’t your birthday on June 14, the same day as Donald Trump’s?”

Three girls in the DC area have asked me about attending. As long as you don’t attention whore, are not a journalist, refrain from debates, and stay in the back, you are allowed to come. 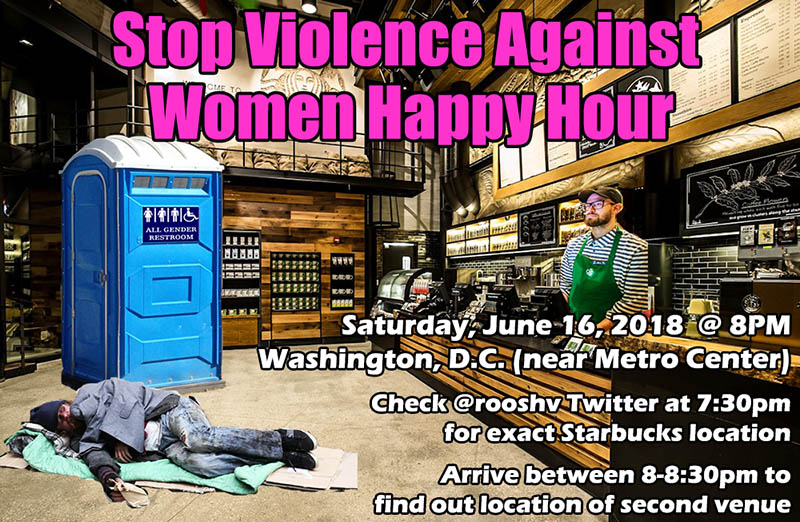 If my Twitter is banned for whatever reason, check my Gab. This event will not be livestreamed, though if there are protesters I will film them for laughs. See you on Saturday.