The Danish system of equality is amplified by Jante Law, a set of cultural rules that is deeply engrained in every Dane. Its main tenet can be summed up as: “No one is superior to anyone else.”

It’s taboo to show off, brag, or even indirectly show your value. You can’t talk about how much you enjoy your job, how you bought an awesome brand new anything, or how generally happy you are with life—anything that might show how you may be better than your audience. When you disagree with someone, you have to be very gentle about criticizing them because otherwise you would imply that you’re smarter. You can never say “you’re wrong” to anyone. Most Danes avoid possible arguments by simply not bringing up their contrary opinions. 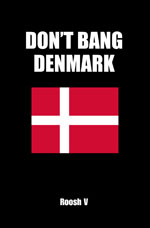 Here are the ten rules of Jante Law:

Take a minute to think about the resulting personalities of people who believe in these rules. Combine it with Danes not being risk takers. Can you imagine the type of conversations that result?

Everyone is scared of generalizing or giving strong opinions. Risky topics are avoided. Showing knowledge or experience must be done in a light-handed way. All your accomplishments, no matter how small, must be minimized to make them a result of luck instead of hard work or innate talent. You can’t judge those who are less fortunate than you by calling them lazy or stupid. You’re immediately punished for showing any real spark or emotion. You must hide your individuality and conform to what society expects of you.

The Danish egalitarian system and Jante Law feed on each other to form what is one of the most liberal, feminist-friendly societies in the world. Therefore, when it comes to getting laid, your American attitude and belief system will cockblock the fuck out of you before you even open your mouth. Since basically the entire point of game is showing you’re better than the next guy, something that Jante Law specifically forbids, it’s no surprise to find that game efforts will not be well received in Denmark, especially if you consider yourself an alpha male. It was amusing how often and how quickly I’d offend every Danish girl without even trying.

In the States you may have heard someone say, “If the police want to get you, they will. There are so many laws on the books that you’re always breaking one at any point.” I feel the same way with Jante Law. As an American, you’re breaking every facet of Jante Law just by being American. Your confident body language alone is breaking tenets one and four. Understand that Danish culture will cockblock you on your every approach.

Even minor game techniques go over poorly in Denmark. For example, let’s take a look at this statement: “When I was in Colombia for six months, I studied Spanish. I got good at it, but now I suck again.” A pretty innocent way to show value to a girl, right? Not in Denmark. I’m implying that I’m more well-traveled than her and also more knowledgeable in the realm of language. I’m breaking Jante Law. The girl will punish me by withdrawing from the conversation.

You’re probably thinking that this is absurd. That’s because you’re from a country like America, England, Australia, or Canada, where that type of statement will be rewarded with female interest. The conversation you’re supposed to have in Denmark should be void of these types of “value drops” while at the same time not teasing her at all, since teasing implies that you’re better than her. Consider that even wearing a tight t-shirt that shows off your muscles comes close to breaking Jante Law because you’re bragging that you’re stronger than someone else. In Denmark, individuality must be destroyed for the greater good. You’re not an individual, just a worthless slug that is just like all the other slugs.

While the Danish government has made human rights more egalitarian, Jante Law has made sex more egalitarian. Instead of a few guys fucking all the women like in the States (while the sexual losers stay home and play World of Warcraft), you have more Danish guys getting laid, though with fewer partners. In other words, the alpha male is neutralized in Denmark. He’s not rewarded with more sex for his alphaness because alphaness breaks Jante Law.

If you were in a country where game didn’t really matter and everyone downplayed their attractiveness by looking like they had just come out of a thrift store, which man would fuck the most women? Answer: the one with the best social circle.

My biggest complaint about Jante Law is that there is a double standard in how it’s applied. I’ve already remarked how Denmark is a highly feminist country. It’s a place where women think they’re equal or superior to men, eager to castrate them for displays of alpha masculinity. So can you take a guess as to which gender will be hypocrites when it comes to the law’s application?

Danish women are the most hypocritical breed of female I have ever encountered. Let me give you an example. In conversations, I would make a comment about how Danish women aren’t feminine or that the state shouldn’t be so eager to take care of drug addicts who have no interest in quitting. I was then scolded for having “expectations” of how people should or shouldn’t act and that I was attributing a person’s faults to his nature instead of his environment. Fair enough—that was their argument and I can respect another person’s opinion.

Then five minutes later, I’d say I was going to Poland. The Danish girl would frown and say, “Why Poland? The people there are ugly. Polish girls are dirty prostitutes.” Really? You just got on me for generalizing, but now you’re doing it five times worse. This happened to me at least a couple of times each week.

You’re not allowed to criticize Denmark or their way of life, since you’re just a stupid, possibly fat American, but she can criticize anything she wants while shitting on your opinion at the same time. This angered me to no end, and the fact that Danish women ended up being so wrong about Polish women suggests they hold some jealousy towards them.

I’ve come to the conclusion that Jante Law has two real purposes. The first is to hold men down. It serves to cherish women and their opinions and hypocrisy while preventing you from “fighting” back. A girl can break Jante Law but you can’t, and if you do, you’ll be banished from the tribe. This is a classic case of women demanding equality but then perpetuating inequality to further their cause at the expense of men’s.

The second feature of Jante Law is to keep your neighbor down. If there is no benefit for your neighbor to show off his unique character, experience, or wealth, that means he’ll be more ashamed about doing better in life than you. Jante Law is like an anti-bragging behavioral modification drug meant to make people who aren’t as skilled or successful as you feel better about themselves.

What Jante Law ultimately does is protect the egos of women and the unambitious who constantly feel the need to compare their lot with everyone else’s. While I approve of the benefits the government gives to all its citizens, Jante Law is something I can’t live with. Unfortunately, we have to accept that they go hand-in-hand, that we can’t fulfill basic human rights for all without viewing everyone as equal. That’s fine for most people, but I’ve spent way too much time happily surviving in the jungle to pack my bags and move into the zoo.