The bars and clubs in Brazil have a weird system. In the U.S. you simply order a drink and then pay for it when it’s served to you, but in Brazil you have to give them your consumption card when you order. Here’s an example of a consumption card: 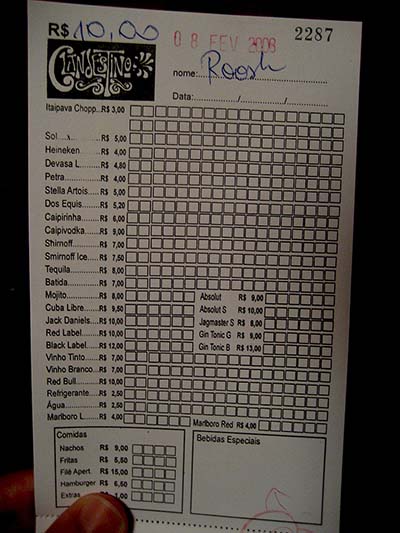 They put a hash mark in the box next to your drink and then they seve you. At the end of the night, you give your card to a cashier, pay the total, and get a stamp needed to exit. It sounds efficient but there are three problems:

1. You will lose your card. A lost card is an automatic 200 reals ($120—and increasing) charge. A lot of gringos waxed about drinking more than 200 reals worth of booze and losing their card on purpose to scam the system, but I did not meet anyone who attempted this. (I found it amusing that whenever a guy shared this idea he thought he was a genius for coming up with it.) A vodka drink is around 8 reals so you’d have to get consume 25 mixed drinks to get there. A beer is usually under 5 reals.

2. Long lines. When you want to leave after 2am or so, the line can be painfully long. It’s like you’re trapped. If you only ordered two drinks, you will usually wait much longer than the time it took to order and pay for two drinks.

3. Rip-off friendly. The amount I paid was almost always higher than what I added up. (One of the reasons the line moves so slow is because half the people are challenging the final amount.) Sometimes the cover charge goes towards your drinking but other times it doesn’t. Transparency is lacking.

This system reminded me of Salta, Argentina, where you had to carry the same glass with you all night long. When you leave they ask you for your glass and if you don’t have it you have to pay something like a 50 cent charge. It was common to see guys tearing it up on the dance floor with a cocktail glass in their back pocket.

One more thing. Remember when I wrote that Brazilians refer to spooning as “lying like oysters?” I was close—it’s actually to lie like seashells. With the Brazilian girls I met in Rio, I can confirm this as 100% fact.