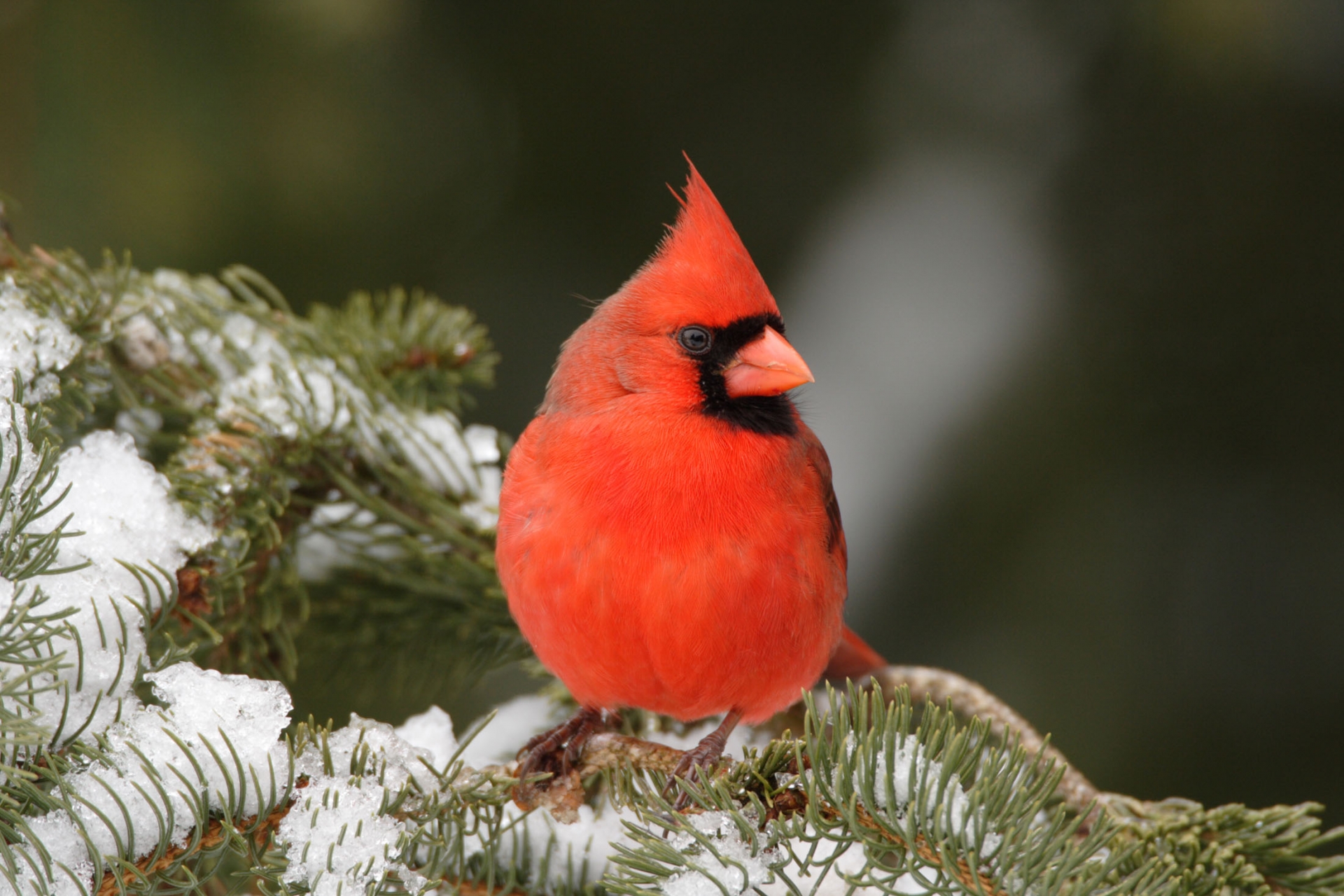 At 40 years of age, I moved back in with my mother to the Washington, DC suburban jungle I was raised in. Within a week, I saw birds I had never seen in nearly three decades I had lived in the area—northern cardinals, blue jays, crows, house wrens, and gray catbirds. Was it possible that the birds were completely new to the area or had I been totally blind to them for so many years?

There is a family of cardinals that live across the street from my mother. I would hear them every day, and if I stared out the window for ten or so minutes, I was sure to see at least one. The cardinal is bright red and hard to miss, even when you’re not looking for it. I wondered if my mother had noticed such a distinct bird that regularly flies right by her window.

“Mom, when was the last time you’ve seen this bird?” I showed her a picture of the cardinal on my phone.

“It’s been a couple of years,” she replied. “They don’t come by anymore.”

“There are several of them that live in the trees over there. They sing all the time and I see them daily.”

“What, really?” She looked surprised, and probably thought I was playing a joke on her.

A couple of hours later, a male cardinal was walking around the parking lot. I went to my mom and pointed him out.

“My goodness, it’s so beautiful!” She was instantly filled with joy, staring intently at the bird until it flew away. For the next couple of days, I called her whenever a cardinal was outside. I taught her their main song so she could know when they were nearby. Within only a week, she was almost as good as spotting cardinals as I was, and would run excitedly to me every time one was outside. She began asking about other birds she was noticing. 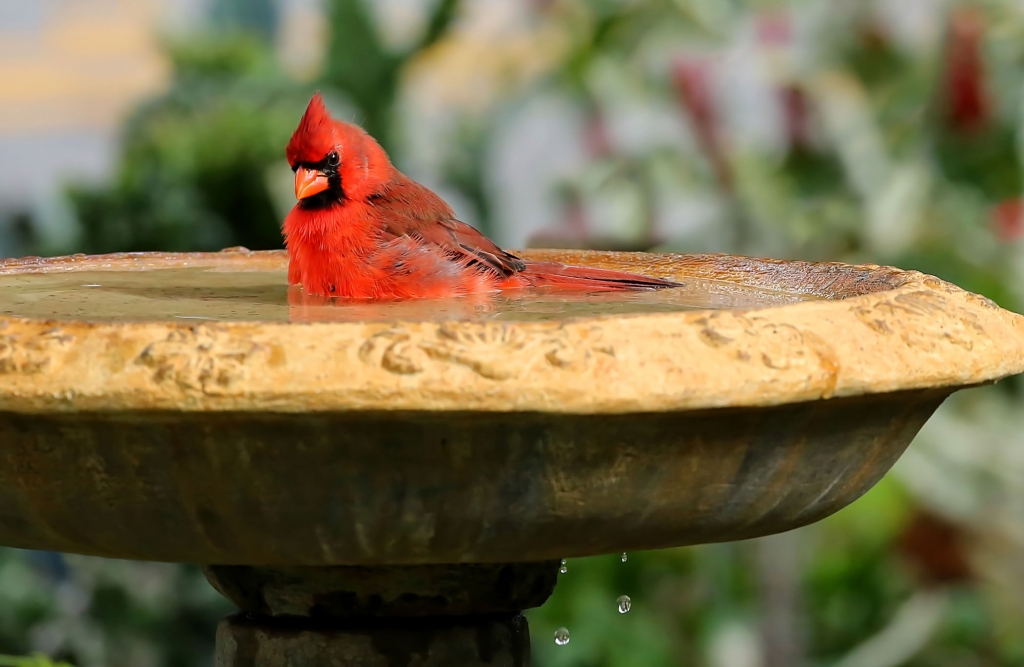 Until I pointed the cardinal out to her, she was blind to them. They could have been perched right on her window, singing their hearts out, but she could not see or hear them. It took someone else to show her the cardinal, and now she can’t stop seeing them. She hasn’t taken bird watching to the level that I have, but something was unlocked in her heart through my basic teaching and now I can say that her life has a little more beauty in it than before.

All humans are machines for recognizing beauty and truth, but unless they are taught by a guide, they may never see it. Our physical bodies act as antennae to receive the signal of God, but unless the Gospel is taught to us, the forces of evil will keep Him hidden within our hearts. The world corrupts our conscience at such an early age that it usually requires divine intervention or a loving teacher to unlock the Kingdom of God that is already within us.

How much longer would my mother have gone in her life without enjoying the beautiful cardinals unless I pointed them out to her? What a shame if she died without experiencing it. Now imagine how much detriment it is to our soul if we are not shown the One God and His infinite love and power. If you have eyes then let me point out that God to you. He flies by your window every day, waiting for you to notice Him, and all you only have to do is turn your head and look.

Read Next: Learning To Love God 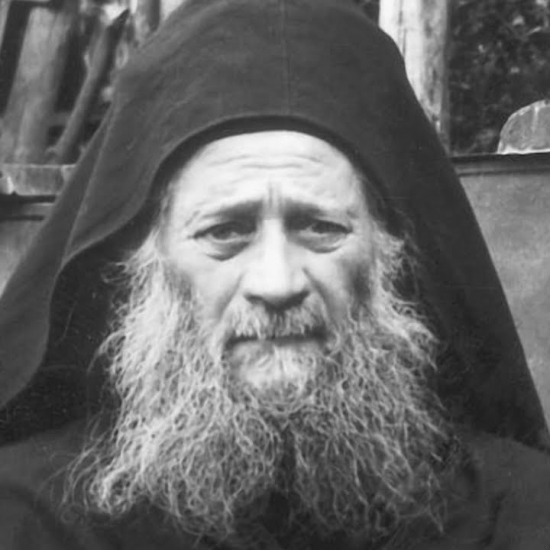 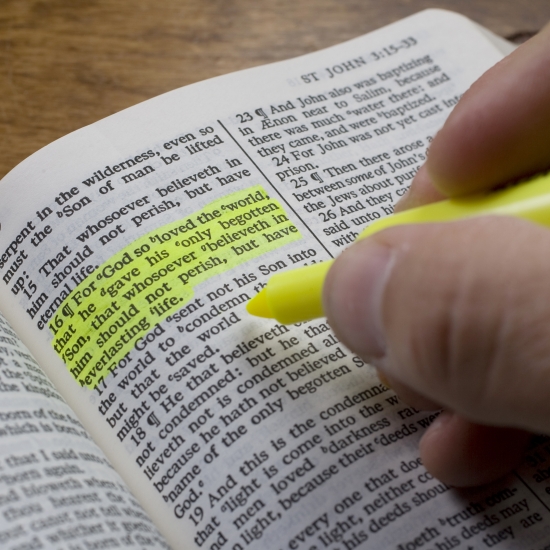 A couple of years back visiting the FL Keys we stopped in at a bird sanctuary where injured birds are nursed back to health; volunteers give guided visits in exchange for donations. A young Dutch couple arrived at the same time as we did, so we followed the guide together.

At one point, beside a large enclosure housing many different birds, the guide pointed out one seagull and asked us to notice how it behaved in a particular manner (don't recall the specifics). The young couple were enthralled, as though this were some exotic creature they were discovering where in actuality it was a plain seagull. From the youngest age, my mother taught me to appreciate everything in nature so it was nothing new to me, although I was still able to appreciate it. The reaction of the young couple puzzled me somewhat - the behaviour we were witnessing was no more unusual than any of the interactions I see between the sparrows and grackles on my birdfeeder, or the squirrels in my yard, or any other of the common creatures we see in our everyday environment.

I just hope that for the young couple, they took away the lesson that you can appreciate nature and all its creatures in any setting. All it takes is a minute or two of observation.

Very interesting
I usually notice the red cardinals, I thought they were all red. My mom asked if I've ever seen the other ones I said not. This morning I see the female cardinal for what seems like the first time 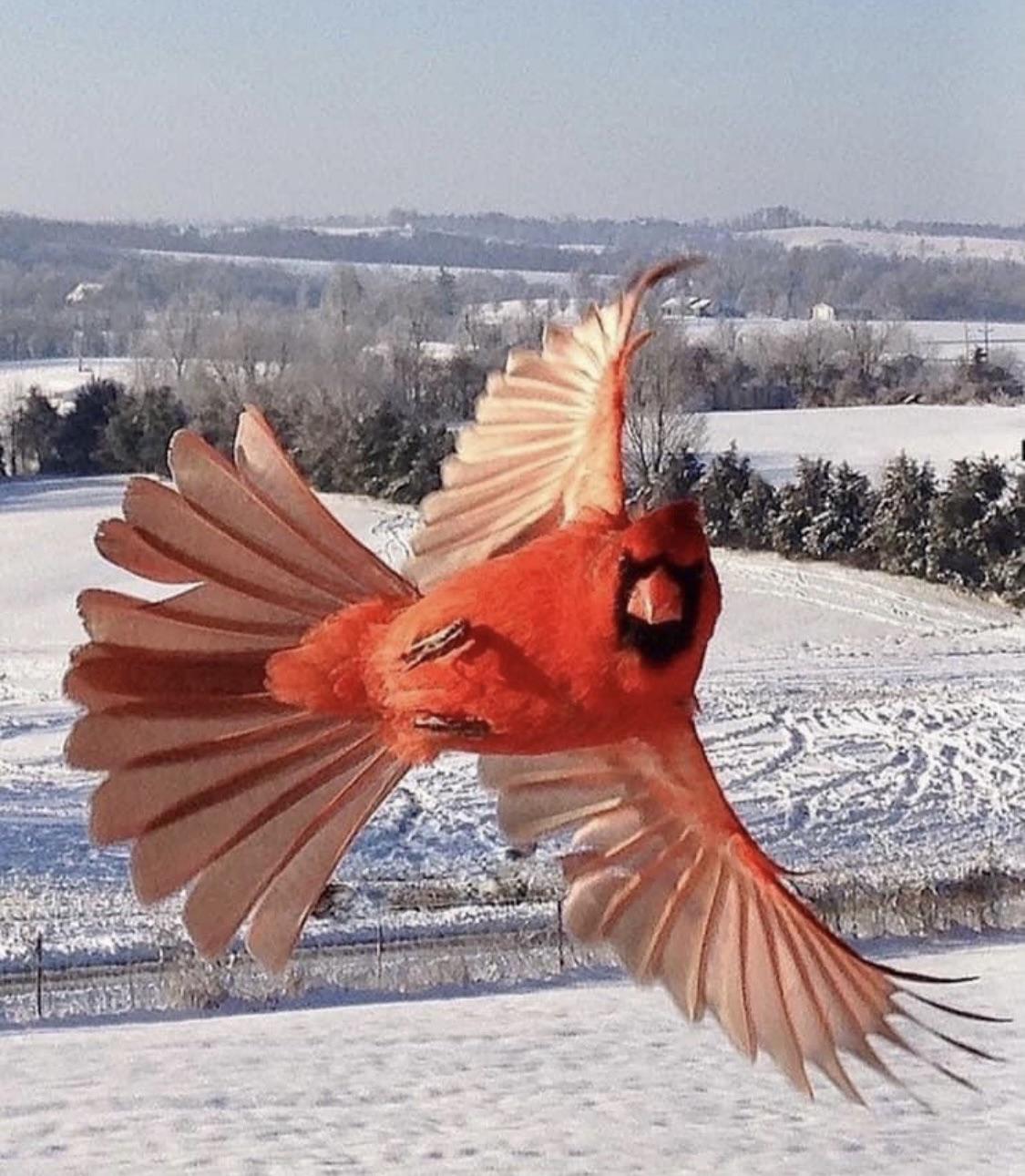 I love watching the birds (and squirrels!) from my kitchen windows. We don't have cardinals here, though. Most are much more nondescript neutral colors (except for the steller's jays which are also kind of obnoxious :squintlol:), but just this morning my husband and I saw a varied thrush!

I think we constantly miss the beautiful things tht are working for us - like the weather, our health, the environment and only focus on the things that are wrong, we miss the little miracles.

During last two months I've been getting repeated visits (even as long as 3 hours straight) from a green woodpecker living nearby. He's digging through the snow to reveal the ground and then in the soil. It turned out he was eating small, black ants that are hiding right beneath the surface. He did that just couple of meters from the window so I could take a really good look.

He doesn't need Facebook or LGBT in his life, God already provided everything he needs. 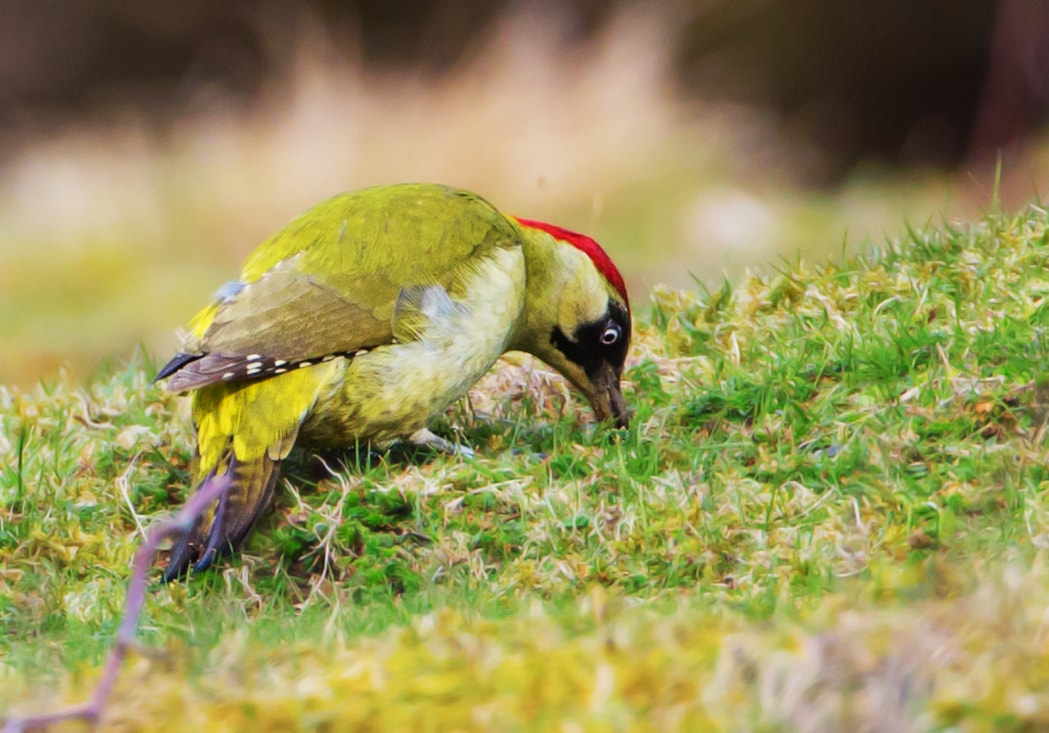 Last spring during the lockdowns, I spent more time at home and really looked at the nature around me. I was so amazed to notice the beauty and complexity of the behavior of birds. I saw a cardinal couple start courting outside my windows, come for “dates” every evening and eventually bring their three offspring with them to the feeder to teach them how to forage and behave. I also got to witness a few types of woodpeckers creating their homes in nearby trees, watching them drill perfectly round holes to create safe abodes for their future families. I also got to watch a red-bellied woodpecker come to the feeder with his son and notice how the brilliant red color slowly filled in on the baby bird as it matured. I am now watching the birds practice their cyclical patterns through another spring, and I am so grateful that I was granted such a gift to slow down and observe things which I normally never noticed. It has a been an amazing and humbling opportunity and blessing!

Really beautiful ending, Roosh. It's easy to get caught up in the business of daily life and find that our heads are stuck watching our feet. We need to start looking up every once in a while so we can see all the beautiful things God has surrounded us with.
I will try to start keeping my eyes open a little more to see these things. I live in the Pacific Northwest, though, so I won't be seeing any Cardinals, but I'm interested in what other kinds of birds we have here.

Has anyone seen the picture online of the white cardinal? It is so beautiful that I wanted to mention it. It is worth looking up to see how wonderful the sight is.

Northern NJ has a great variety of birds. The mockingbird is a personal favorite. Makes me smile thinking that they have multiple personality disorder as they mimic the sounds of all the other birds. It is quite impressive. I walk to the bus at 5AM in the morning when the rest of the human world is asleep. Spring is the best time to hear all the different birds at dawn with their familiar calls. It always brings me great joy.

I live close to a river and, in addition to the usual suspects in the UK, in the last couple of years, I've seen Egyptian Geese, Mandarins, and Muscovy Ducks.

Several years ago, I use to live in a ground floor apartment that had bushes lined up alongside my bedroom and living room windows. I didn’t mind this because the bushes actually provided me with some privacy. They were also home to a large amount of birds that lived in them. Every morning from 4:30am onward, the birds would start their daily singing rituals. They were loud and and I could hear them fluttering around.

The first couple of times when I moved in I did get a little annoyed at having to hear this every morning. But after a while, I actually started to look forward to hearing their morning chatter and grew to appreciate their presence in my life. Two years later, the building management decided to remove all of the bushes for so called safety and security reasons. I actually called them up to ask them to reconsider this because the bushes actually provided me a high degree of privacy from a parking lot that was next door. They refused and removed all of the bushes. I actually missed the birds that resided in these bushes and missed their early morning chatter. It was a very lively chorus every morning. 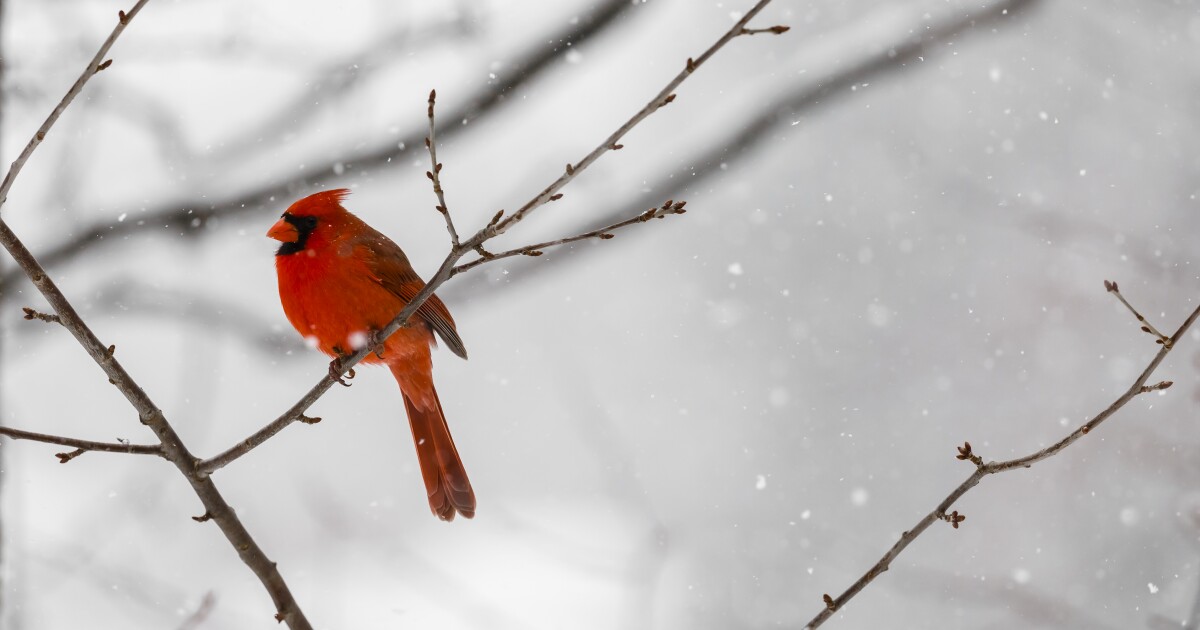 
A part-male, part-female cardinal was spotted in Pennsylvania on Saturday, according to a local resident who said he's been a bird-watcher for 48 years. 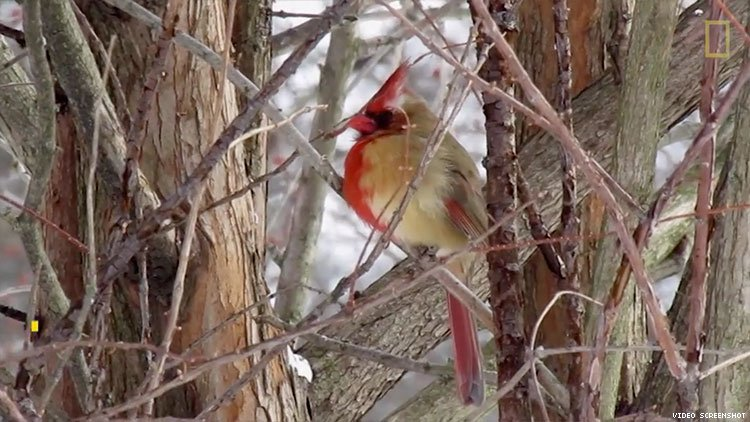 Funny I stumbled upon on this thread, randomly on YouTube one night I came upon a live feed of a massive bird feeder setup that was actually local, I started putting it on the tv in my office at work. Gods creations are beautiful I’ve always loved nature and animals, I can honestly say it has definitely had a soothing influence on me at work randomly seeing the wildlife innocently come to eat on the screen.

I live in my childhood home I ended up buying my parents a new place closer to all of our relatives and we didn’t want to sell the family home so I sold my downtown loft and took the house. This bird feeder cam made me recall all the beautiful blue jays and morning doves I used to see in the backyard and how I don’t see them anymore, we used to have huge populations of them. But are they really gone or do I just not notice them anymore....I’ll have to take better notice this spring.

I came to God through Mother Nature. We are now moving in to some wild territory, I can't wait.

Earlier this week I slept outside in a snow cave I made from all the snow I'd shovelled off the driveway - it was only going to be around -2C overnight.

I woke early to the sound of cardinals singing - first time this year, it's nice to have them back.