I told the taxi driver my destination. Next thing I looked at the window and was in a strange neighborhood, only to be reassured by the driver that we’ll be there in a minute or two. When we finally arrived I noticed the fare was noticeably higher than I’d paid before.

I thought long and hard about all the taxi drivers that have ripped me off by taking the long route, and I realized they were almost always young. The old taxi drivers around my dad’s age almost always took the direct route, probably because they don’t have energy to hustle. 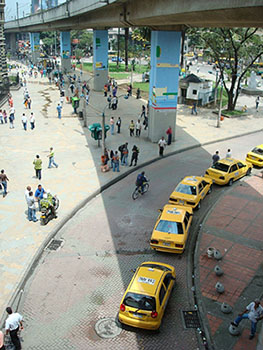 If you ask the young guys why they’re taking the scenic route, they respond by saying it’s quicker or the faster way has too much traffic. Very often they “forget” where principle roads are with an act worthy of a Golden Globe. They will take you to a closed road and feign surprise like an act of god was probably involved. I’ve had some of them go literally in circles. Late at night they inspect me in the rear view mirror to see if I’m drunk or not to take the really long way, but I always pretend I’m sober by sitting up straight and having my eyes wide open. The old guys just want to put in a day’s work and go home to their families. To them it’s not worth it.

When I need to hail a taxi, I now wait until I can get visual confirmation of the guy’s age before raising my hand. If there is a taxi line and an old guy is second, I wait until someone takes the first cab so I can get in with the old guy. If you think this is a matter of money it’s usually not, because the long way rarely costs more than a dollar extra, but as a man of honor I don’t like paying more than someone else for the same service. Plus I don’t want to give the hustlers the immense satisfaction that comes from hustling a gringo. The only way I’ll hop in a cab of a young guy is if I can give him specific instructions (i.e. Quiero ir a la casa de puta—el mas grande—por Oriental).

It’s 100% safe if the old guy is sleeping inside the cab when you knock on his window. He will take the direct route.