Choice in dating removes the necessity of personal effort. When a man knows that he has choice in the dating market, he will begin to expect more sex while putting in less effort. When I’m in a city that is generally “easy,” I go out later, approach less, and don’t take much time to prepare for a chance at getting laid. I just walk out the door because I know my existence is likely to be good enough. In this type of scenario, the marginal cost of banging an 8 instead of a 7 is not worth a change in my routine.

In the United States, women have more choice in men than their counterparts in any other nation. An American 7 is approached via day, night, and internet 100 times more than girls in Eastern Europe. Not only is she approached more, but she is approached by more desperate men who put her on a pedestal much higher than anywhere else.

As I’ve detailed in the past, choice creates an environment where only the tightest game will be rewarded. Not only will a man in this environment have to approach a lot, but he will have to do so with skill so high that his own father would have died a virgin if forced to do the same.

Choice acts as a “feeder” to create a girl who flakes, overeats, sleeps around, cockblocks, and becomes masculine. Choice feeders include night clubs, Facebook, OK Cupid, game, the iPhone, and any other technology or environment that allows men to approach women in order to get sex.

When I was in Poland recently, I walked around a shopping mall and saw many beautiful girls. I thought to myself, “Even if I bring 50 American guys in this mall right now to approach nonstop for a month, the girls wouldn’t sour. They would be slow to gain weight, lose their femininity, or become rude. Why is that?”

There are two reasons:

1. In Poland, a girl sees an approach as a random encounter with a man. In the United States, a girl sees an approach as a gender issue, rape by the patriarchy, or a means by which women are somehow being objectified. There are factors in Polish culture that prevent the girls from seeing an approach in those terms, while in America we have cultural “enablers” that tell the girl to behave like a trashy sailor or go to battle when interacting with a male.

“Enablers” are institutions, movements, or memes that tell a woman to embrace the negative features that result from her having a lot of mating choice. Enablers that exist in the culture include feminism, liberalism, anti-fat shaming, anti-slut shaming, divorce laws, and misandry representations in the media.

Feeders and enablers work together to create a death spiral: 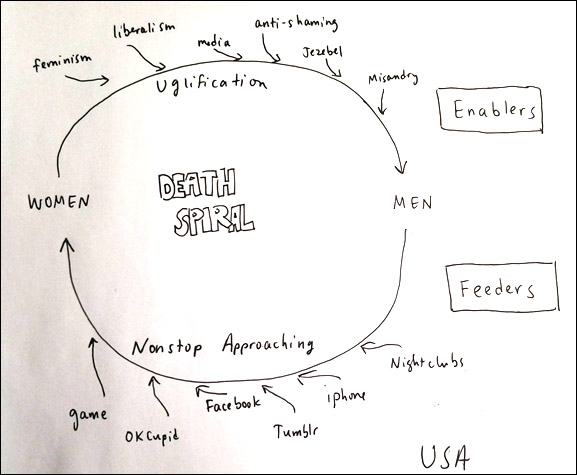 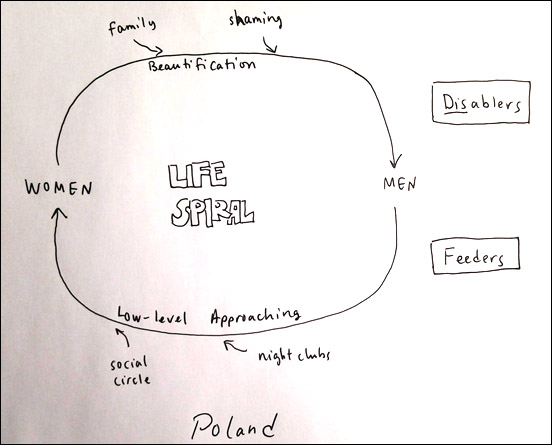 In Poland, notice how there are less feeders and a complete absence of enablers. In fact, there exists disablers in the form of family pressure to marry along with a strong fat and slut shaming culture to prevent uglification. In fact, the disablers promote beautification.

When an American girl turns 21 and begins to hit the clubs in stride, unburdened by her college social circle, she is unsure how exactly to take being approached so much. It may initially seem neat to her, but then she goes onto Jezebel to read how game is stupid and how even nice guys are evil. She reads advice columns telling her that she can have it all while playing the field in her twenties and even early thirties. She reads a news report about how important Slut Walks are in empowering women. She hears Obama saying how it’s unfair that woman make less than men. And finally she sees a book in Barnes & Noble about how men have turned into little kids that need to man up.

Her mind is unable to resist these influences since they come in the form of a nonstop assault that happens to confirm with what she’s learned about men in her university elective courses. Enabling now takes place. She will begin to see men approaching her as inferiors and as a nuisance, treating them with disdain and disrespect. The uglification process begins soon after, giving her faux self-esteem and confidence in being ugly and masculine. When she hits 25, she is stronger and more empowered than men her age.

She stays single and sleeps with the men who can keep her turned on for a couple hours without saying a bad line. These men are not as handsome as those who approached her when she was 18 and 19, before she began shopping at Lane Bryant, but the marginal cost of being skinny would only get her a guy one point higher. The result is a fat girl who mildly hates men, never reproduces, and has well over 50 sexual partners by the time her body gives up releasing eggs.

I call it a death spiral because every additional set of approaches causes the erosion of habits and beliefs that were meant to preserve her appearance and femininity. She can slack off because the guys keep coming and the greatest media influences in her life tell her to embrace the fat. They even put out flawed studies that tell her being fat is healthy. In countries with a death spiral dating market, you will see increasingly overweight and useless women who still believe they deserve Mr. Perfect.

The American cultural elite will promote any method or policy which increases a woman’s choice while simultaneously limiting a man’s. You would think they would therefore embrace game since it gives women more choice in men, but it gives men greater relative choice, especially for the alpha male who can easily swoop up a boatload of notches via one-night stands.

The elite will therefore actively seek those methods, behaviors, and policies that give women a greater proportional amount of choice than men. It turns out that internet dating is perhaps their greatest tool, as even the most pan-cis-trans feminist with shaved head but unshaved legs has a profile. In fact, internet dating, combined with the smartphone, are the two most amazing male screening tools to ever be invented, giving even average girls more male attention that female celebrities received a generation ago. Every time you send an email blast on OK Cupid to get a few lukewarm responses, if any at all, a feminist smiles. Every time you approach a girl in a club and bang her within a few hours through the use of game, that same feminist will ask the authorities to investigate if your empowerment was actually illegal in the form of rape.

Feminist sympathizers have grouped gender behavior into two categories: choice enhancers and choice blockers. The former will increase how much choice women in a society have while the latter will decrease it, since it gives more power to men or causes them to “drop out.”

Blockers will be viciously attacked by all women (not just feminists), because they decrease a woman’s relative choice compared to men. Have you ever heard of a woman crying that a black-owned barber shop was getting shut down to be replaced with a wine and cheese bar? Never. But the second they read a story about a lonely and shy American man finding a Ukrainian wife, they lose their shit. In fact, it’s easy to predict the response of future inventions or behaviors by just asking yourself who it gives more choice to. If it gives more choice to men, there will be some group that will push for it to be criminalized, regulated, or banned outright.

As you can now see, the solution to our problems is not simply a matter of beating feminism and shutting down Facebook. There are multiple factors working simultaneously to destroy women. I predict the death spiral will impact other countries as the same feeders and enablers present in America make their way around the world.

Or will it? While I do think countries will get worse before they get better, many have a built-in cultural resistance that prevents enablers from completely taking over like they have in America. Why is it that a place like Brazil is so open to American-style feminism while a place like Ukraine is not? What is it that accelerates or limits the damaging effects of giving women choice in the dating market? These are questions I will answer in the future.

Read Next: The Number One Corrupter Of Women