This post is adapted from a conversation I had with my 14-year-old brother.

While there is a large number of things that can increase the happiness of a man, I believe only five are absolutely essential. They construct a pentagon: 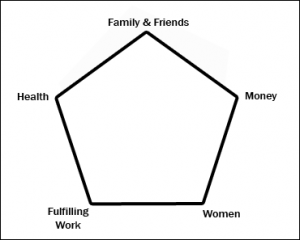 Human beings are social animals. All those studies that say alcohol is beneficial to your health actually measure the social benefits of drinking (among other things), and not the effects of the drug itself. Truth is we need a stable circle of people to confide in and pass the time with. I accept solitude as a necessary feature of life, as even family members will come and go, but I know that I’m a more grounded, stable person when I’m anchored with other people that share my blood or personality type.

If you’ve ever had a serious health scare, you know how just about everything else fades into the background while you focus on repairing your body, but a lot of people continue to mortgage their future with unhealthy living. This isn’t about living to 100 years old, but living the most number of years with a sound body that enables you to enjoy other points on the pentagon. I rather die at 50, healthy as a horse, than living until 70 with half of those years afflicted by a chronic disease that could have been prevented.

Health is not only physical but mental, too, such as the case with depression and anxiety. I know that my mental health degrades when staying in the United States for an extended period of time, improving drastically once I hit the road.

It’s hard to approach other areas with vigor and optimism if you don’t look forward to each and every day, something that only a fulfilling job can give. Otherwise you may fall into ruts that involve drug abuse and wasteful habits like television watching or obsessing about the news. There are too many hours in a day to suffer not having something that stimulates your brain and allows you to feel that you’re making a positive difference in the world.

One good thing about my generation is that they are less patient with boring jobs. You won’t find us working in factories (like there are any, anyway) and it’s common for men to take a year or two off to explore things on their own in order to discover the type of life that tailors them best. You probably already know several men who are doing what they love, with gigs that most likely started as an extension of their hobbies. We live in an age where a budding writer, musician, artist, or entrepreneur can succeed with desire and hard work, something that was considerably harder twenty years ago. Old excuses for being stuck in a dead-end office job are no longer valid.

We can’t fight the genetics that nature has given us, which says that we need to mate with fit members of our species. It is undeniable that a man is most happy when he’s sexually active. There is a point of diminishing return where too many women will not increase happiness, but there is a basal level of sex that I’m sure releases beneficial hormones into the male bloodstream, allowing him to more easily focus on other aspects of the pentagon. For most of my 20s, my main focus was on women, but as I can now stay sexually active with a smaller amount of effort, my focus has easily shifted to accomplishing other goals.

Lack of money limits your options for achieving other areas like health and women. One problem with the Western man is that even though he is making a lot of money (compared to men from other countries), his lifestyle is too high maintenance and full of consumer waste. His income is high but because he doesn’t save, he will never see the benefits that a pile of cash can give him, such as peace of mind and extra options during stressful times when he experiences a direct hit to work or health areas. The Western man ends up worrying more about the future than a poor man living in a Brazilian favela.

Currently I’m more financially secure than I’ve ever been in my life, but I live like a frugal man because I know that an upgrade in lifestyle with more “stuff” will not result in an increase in happiness. I enjoy my time with simple experiences while letting money in the bank balance the ups and downs that will get thrown at me.

Understand that every point is connected and always affecting each other: 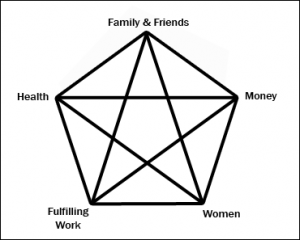 In America it’s hard to have health with money, and even an overindulgence with women can result in health problems. A problem with work may strain relationships with family and friends, or hammer your energy so that you don’t have enough left over for women. Here’s the happy man “pentagon” that we have been trained to believe since birth: 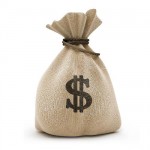 Many Western men believe money, above all else, will lead to happiness, but your life can still be bleak if you are rich but haven’t worked on the other areas.

I can’t say I’m too optimistic for the Western man. It is now exceedingly difficult for him to find a decent woman, regardless of his income. He has the least amount of friends of any culture, and he has to deal with the most expensive health care system in the world along with diminishing job prospects. While expatriation is an idea that may improve the life of many men, it will not bring him more happiness than if was already born into a society whose soil was fertile enough for his development. Western land has become an increasingly harsh environment for robust crop cultivation.

The key to happiness is balance. While a short-term excess with one point won’t hurt you, prolonged obsession with women, work, or money, for example, will definitely cause other areas to suffer. Is there a book written on how this balance can be achieved? Is there a man who can be modeled? I don’t believe so. You must determine the best mix for yourself by being mindful about working on all five areas. That usually means working hard on your goals, changing comfortable routines, taking risks, and being a real man instead of a chump that modern culture is telling you to be. You must carefully stop and think at what affects your being. You must make the right changes, and you must embrace a lifelong process that will make you not only happier, but the best man that you can be.