I just finished listening to a manosphere radio show that features a prominent blogger. His co-host is… a girl. I’m supposed to see value in her sharing thoughts on men’s issues, yet instead I’m disturbed at the platform she was given. I believe this is the exact moment that the manosphere has jumped the shark, where I’m now embarrassed to be a part of it. I predict within a couple years, the word “manosphere” will attract as much stench as the word “PUA.” There are two reasons for it: (1) The arrival of geeks who have no game, and (2) The infiltration of women.

There were three guys who first noticed this decline: Bronan, Danger & Play, and Nate. They mocked the “manospambots,” their obsession with the concepts “hypergamy” and “solipsism,” and their flocking to a community not for their own betterment but to rationalize their failures. Many of these new arrivals are married and so have a natural hostility to game and the bachelor’s option to sleep with more than one woman per year.

Take a look at the word hypergamy. Psychological studies now show that a man’s use of this word is highly correlated to not getting laid. And yes, the ability of a man to lay a woman is, for better or worse, a reliable indicator of his value. If you don’t agree with that then I think we all know why. The guys who have a tendency to use manosphere jargon are socially awkward in real life, similar to how PUAs of the previous decade who used acronyms like DDBL and FMAC didn’t actually know how to pick up. If a man doesn’t get laid, or doesn’t at least put in sustained effort, he has no business complaining about women on the internet. Bitterness is not a substitute for experience.

My position in the sphere insulated me from taking the criticisms of Bronan, D&P, and Nate seriously, because as a manosphere elder I did want it to crush feminism and so on. I closed my eyes to a lot of what was going on. The Mark Minter affair, however, made me realize that this community is turning into one of pussy beggars, nearing the level of men’s rights activists. It wasn’t Minter himself that made me come to this conclusion, but the reaction to his fall.

I hate to beat an old horse, but you could not find a man in America more against marriage than Minter. If you google “hates marriage more than anyone in the world,” your browser would crash, the lights would flicker, and Minter himself would knock on your door, demanding you sign a binding contract to never marry a Western woman. And what did he do? He put a ring on a manosphere groupie that he may not even have banged yet. Surprisingly, the response from a large part of the sphere was to defend or congratulate him. Dozens rose up to argue that it’s not necessary to practice what you preach, that it’s okay to be a keyboard jockey, and that it’s fine to play make-believe. Nah, I don’t play that—I never have and I never will. I don’t want to be a part of any community that defends phonies, because it’s obvious those defenders are envious of Minter’s grand score and are actively trying to get laid by a 30-something manosphere broad themselves.

The flood of these beta males, who have never approached a woman in their lives, coincided with the arrival of women. It’s known that women try to poison places where men congregate, but trailing them was a long line of beta males and white knights who are desperate for their attention. It becomes a feedback loop where the arrival of women encourages more weak men to follow which then encourages even more women to come. Instead of keeping them out, some manosphere veterans are welcoming them with open arms. There is a large subset of men who now participate in the sphere primarily to get female commenter attention. It’s pathetic. The manosphere used to be full of Biggies and Tupacs—now everyone is tripping over themselves to be Drake, blogging and commenting in the hopes they may get laid. (I apologize in advance to the large number of neo-Nazis in the manosphere for comparing them to a man of non-Aryan race.) It’s hard for me to accept that the manosphere is well on its way to becoming a match.com for old people who hate blacks.

In December I made the following prediction: 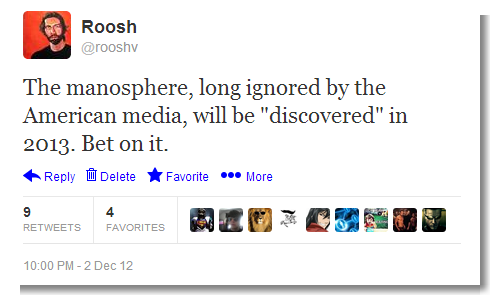 Only now do I now foresee what my prediction entailed. First, it’s important to understand that the mainstream cannot publish dangerous ideas. They must be sanitized beforehand. Men’s rights victims—I mean activists—are getting some mainstream exposure right now. Do you know why? Because their movement is impotent. It’s safe. Their mention in articles is mainly a vehicle to publish feminist talking points and inoculate the masses against their whining. And when the spotlight was moved onto this side of the sphere, who did it shine on? A married woman named Dr. Helen. She made the media rounds to cash in on a book which “borrowed” the ideas we have been masticating on for over five years. You’d think there would be outrage, but there was congratulations instead. She was looked on as a savior who may help us get more traffic to our blogs, a trailblazer that would bless us with exposure in the Huffington Post and The Atlantic. How sad is it for a community to decry white knighting but seek one in a married woman? I will never let a woman speak for me or the community I’m a part of, and the only way to ensure that is not to be a part of one where men are rushing to munch the carpet of an elderly woman in her 60s.

At its peak, the non-MRA portion of the manosphere excelled at teaching men how to get laid while laying down Chris Brown-style pimp slaps on feminists. It was great: guys were simultaneously sharing important knowledge and making the world a better place. I’ve happily met over 200 of my readers by now, but I wouldn’t dare meet a lot of these fat old dudes who are the fastest growing segment of the manosphere today. It’s one thing to complain about having to work hard to improve your station, but it’s another thing to complain while hoping to bang a female manosphere commenter who is a 4 on her best day. The worst part of it is that guys are drooling over old manosphere women who are already married. I don’t associate with these people in real life, so why would I do so online?

Don’t read the writings of men who don’t get laid. If a man can’t solve the challenge of getting his dick wet, he’s a poseur and internet warrior. He’s a bloviator, a troll. Don’t read the writings of men who don’t know how to walk up to a woman and start a conversation. Don’t read the writings of men who lavish attention on female commenters, because if he was getting laid in real life, he wouldn’t even notice them. Game is an obligatory pursuit for the Western man in 2013, and if he is not pursuing it, he’s not someone worth listening to. He’s weak and scared. He needs to talk to women instead of spending hours a day nurturing his beloved manosphere personality. His world view, contaminated by a lack of female intimacy, will lead you down the wrong path. These fools have tainted a community of men that exclusively stood for getting laid and spreading truth, but now rushes to pardon obvious fakes like Minter.

At risk of sounding dramatic, I’m stepping away from the manosphere. I don’t want to be associated with a community I’m finding increasingly hard to identify with. I can’t control what other people do on their sites, but I can control what happens here, on the forum, and on ROK. I will gleefully ban all women, keyboard jockeys, and whiny divorced men. For as long as I’m alive, my sites will remain a place where men can be unapologetically male. The manosphere, sadly, is no longer that place. It had a good run, but it’s time for something purely masculine to rise up in its stead.