I’ve been to 33 cities in every South American country except Colombia, Guyana, French Guinea, and Suriname. Even though I’m confident three of those four countries would never make the list, I may have to make an edit to this post some time in the future.

1. Rio de Janeiro, Brazil. The secret has been out for over fifty years. Yes, Rio has a very serious crime problem and the police won’t go into many areas without armored vehicles and full SWAT protection, but if you’re a guy looking for a sex vacation and you don’t like Asian girls there is no other city in South America that touches your high odds of getting ass here. Pussy doesn’t fall from the sky, as you might be thinking, but the native girls actually like gringos. Even the native guys like gringos. Go out every night, don’t be a wallflower, and you will get to experience what I plan on experiencing again in the future.

If that hasn’t sold you, how about the a gorgeous backdrop and beach weather nearly year round? Sure the water isn’t sparkling blue, but you’ll be busy on the Ipanema sand angling to get in with the girls in ridiculous bikinis laying next to you.

2. Cordoba, Argentina. The Cordoba tourism agency is going to contact me any day now to thank me for single-handedly increasing tourism to this city by 1000%. I will never get tired of saying that Cordoba has the most beautiful girls in the world. And it’s cheap. And the nightlife jumps. There are no fewer than 30 universities here so good luck meeting a girl over 22. The spinsters here don’t even go out at night because the competition is beyond intense.

A downside of this place is the girls are pretty damn difficult—especially if you don’t know Spanish—but I guarantee you will begging for them when you return home. Their beauty will spoil you until you die. I think I missed American girls for a quick minute until I snapped to my senses: I rather have difficult girls that are my type than easy girls I want to immediately dump after I have sex with them. This is the only place that I talked to 9’s every time I went out, uninterrupted. There is no cockblock brigade in Argentina (or anywhere else in South America). I’ve been back to the States for two months and talked to a 9 once, and I had to compete with only FIFTEEN other guys who felt it was their do-or-die moment.

3. Merida, Venezuela. I traveled to Venezuela for a random 10 day vacation a couple years back, and Merida is still on my mind. This is like a Cordoba-lite with a large college population that loves to party. I still remember the bar El Hoya de Queque, perhaps the best bar in South America, where I got rejected by my first Venezuelan beauty (9+) who at the time was probably the most stunning girl I talked to. I remember how excited I was just because I had the chance to have a conversation with her. 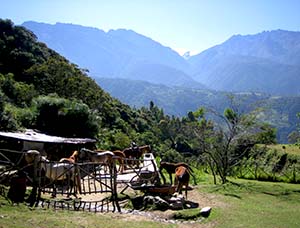 The girls are not as hot as in Cordoba and there are less of them around (in Cordoba you walk outside and in two minutes you see more beautiful girls than a Thursday, Friday, and Saturday going out in Washington DC—no exaggeration), but Merida has a fantasy setting on the doorstep of the Andes mountains. There’s a lot to do here like horseback riding, canyoning, nature tours, and riding up the tallest cable car in the world. Too bad for Merida that it’s part of a country ruled by a dictator who is doing everything he can to kill the tourism industry. “Who needs gringos when we have this black stuff that is bound to run out some day!!”

A few people have asked me about my future travel plans. Colombia is high on my list so I can claim to be a South America girl expert, but I’ve been eyeing Eastern Europe lately, and by eyeing I mean I’m asking guys how easy the girls are in Eastern Europe. Perhaps I’ll visit Cordoba and Merida for a nostalgic return, but Rio is going to have to wait a bit until I get my money right, which is not going to happen as long as I stay addicted to Guitar Hero 3.