One of the hardest things about traveling is finding a decent place to work. A lot of countries don’t have that lingering coffee shop culture that we have, with comfortable work spaces and a staff that leaves you alone. In South America it’s too much to ask for wireless internet, electrical outlets, a bathroom that is less than a quarter mile away, and a large selection of artisanal teas.

Most of the time I had to work from home (or hostel), but unfortunately I wasn’t nearly as productive. In the States I’ve had peak days of cranking out five hours of honest-to-goodness work, but I rarely got above two hours in South America. For my latest trip I took some pictures of my work spaces, which I believe you will find fascinating.

Finding a table and chair was sometimes challenging, so for my first city I used a trash can as my working platform. It’s here that I put the finishing touches on A Dead Bat In Paraguay. On a trash can. When the maid came by I had to remove everything so she could empty it. 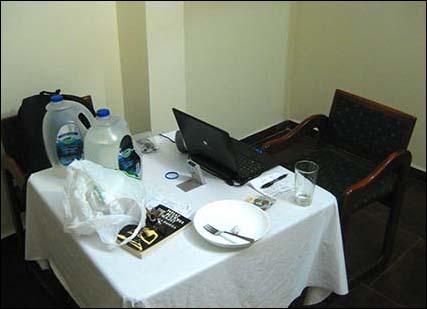 My first Medellin apartment had a pretty decent work area. I started the trip drinking water out of bottles but eventually drank straight from the tap. I never got sick from it. My stomach was actually healthiest in Colombia (it got worse in Brazil and then fell apart in Argentina where my “Days Without Diarrhea” counter never got into the double digits). I’m okay now, thanks. 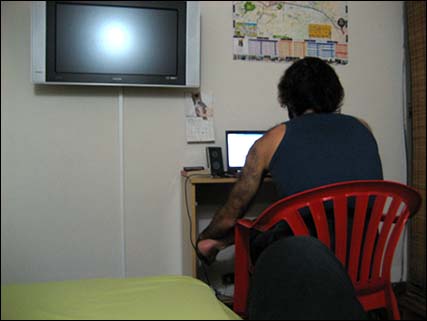 The desk in my second apartment was considerably smaller, but I lived near a McCafe where I could hang for a couple hours at a time. Note the kitty calendar hanging on the wall (thanks sis). 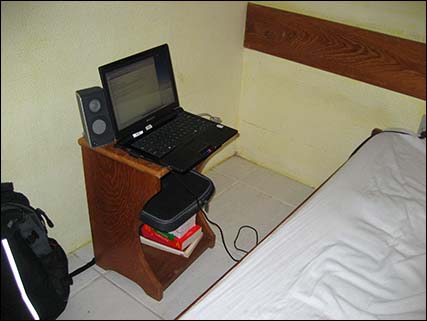 I stayed in this hotel for a couple days and converted the nightstand into a desk. My Portuguese books are stored at the bottom. 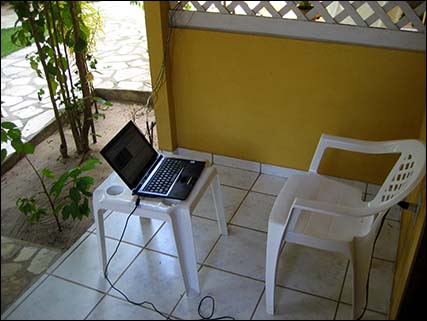 The desk was a little low so I’d have to hunch over to see the screen. There was a massive ant colony nearby that was drawn to the warmth of my laptop. Brazil has a lot of ants. 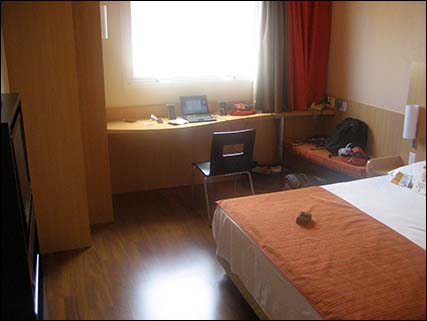 This is the niciest and most expensive hotel I stayed in during the trip ($70/night). Ironically, it was the only place that charged extra for internet and breakfast. 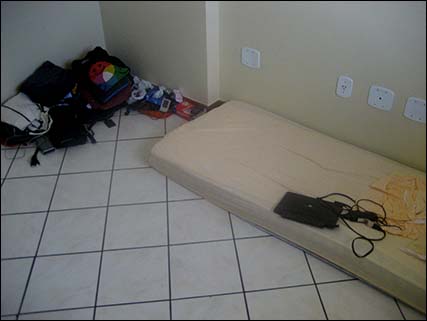 I moved to an apartment in a neighboring city, owned by a guy who worked at the expensive hotel. He had no furniture here so I went to a mattress store and bought a $40 foam thing that barely held up for my week stay. I didn’t get any work done here. 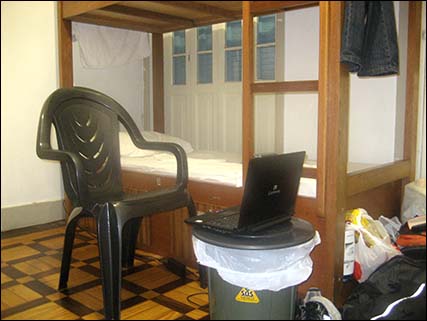 This was my home for the first two weeks in Rio until I found my favela shack. I had to revisit the trash can desk. I actually got a lot of work done here because the room was usually empty with my gringo dormmates sightseeing or visiting the beach. I’m sure they thought I was loser since I didn’t do much during the day. 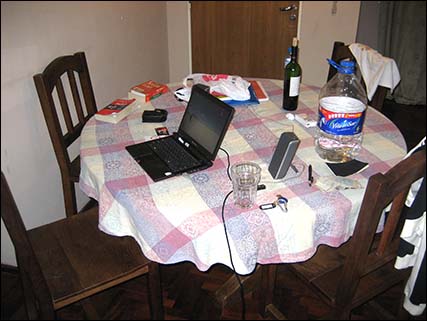 For the first time in my life I lived alone. The apartment came furnished and set me back about $700 for the month (it was expensive because I was on a month-to-month contract). I dreamed of living alone for a long time, but it was surprisingly boring, probably because I didn’t have anyone to talk to. I had a lot more fun living in my Rio shithole with my dreamy Danish roommate.

In Cordoba I finished my third book. It’s about Colombia, and should be out in a month.