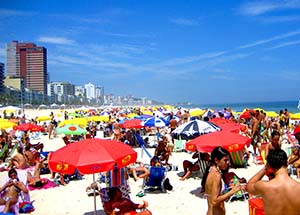 Called “The Marvelous City” for good reason, Rio de Janeiro will be one of the most magical cities you visit in your lifetime. With picture perfect scenery, excellent beaches, fun, beautiful people, and a temperate climate year round, you’ll ask yourself why you didn’t get here sooner.

Everyone in Rio has a body, so if you are staying for a while why not hit the gym? I recommend Equipe1 in Copacabana (703 N.S. de Copacabana). Membership for one month is 175 reals (conversion to dollars), but you can also purchase weekly memberships. Hit the 6-8PM rush if you want to check out the opposite sex.

The beach in Copacabana is well past its prime. The current hotspot is Ipanema beach between the number 9 post and the big coconut tree (ask a local—he’ll know what you are talking about). It’s so packed that conversation with your neighbors is inevitable. Catch a bus between beaches by sticking out your arm and making a puppy dog face. 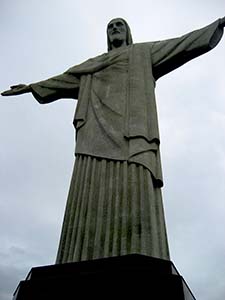 The Christ Redeemer statue offers nice views of the city but is very touristy, with everyone taking the same photo (hands outstretched in front of the statue). Sugar Loaf is nice but not impressive if you’ve already seen the Christ statue, which offers better venues of the city.

Head to the Urugiana metro station for the large outdoor market where you can buy anything from electronics to soccer jerseys.

Rio has four soccer teams, the most popular being Flamengo. Tickets are sold in tourist shops along main avenues and you can hop on the subway system to get there (Maracanã stop). The Maracanã stadium is safe enough to take your pocket digital camera, but you should leave your mammoth SLR at home. Bargain for soccer jerseys once inside the stadium.

A Rio must is trying açai juice. Açai is an exotic berry grown in Brazil that Rio’s hundreds of juice bars put put in smoothie form (it sort of has the consistency of a slurpie). They say it has more antioxidants than pomegranate juice. Also recommend is the pineapple with mint juice (abacaxi com hortela), cashew juice (caju), strawberry with milk (morango com leite), maracuju (passion fruit), and melon (melao). If Rio gets one thing right, it’s juice. You may find yourself juicing up to three times a day. If you are a meathead trying to beef up, try the energetic drinks with names like bomba, or ask them to put protein powder in the already caloric açai. Big Bi juice chains have the best açai, but Bibi is also good. 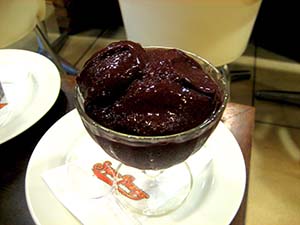 The best pastries and cake in Rio can be found at The Bakers (Rua Santa Clara 86, Copacabana or Rua Visconde de Piraja 330, Ipanema). You must try their Folhado de Queijo (cheese pastry). You’ll find pleasant cafes along Rua Visconde de Piraja in Ipanema. Cafeina is a nice coffeshop serving tasty sandwiches and desserts with locations through Rio.

My favorite restaurant is Delirio Tropical, which offers the healthiest food you can buy in South America with amazing salads and prepared dishes. It is located in Ipanema on Rua Garcia D’Ávila 48, among other locations.

On those rainy days head to Rio Sul mall, located on the right after you go through the long tunnel leaving Copacabana (almost any bus leaving Copacabana passes by it). The prices will not appeal to bargain shoppers, but the food court is half-decent for checking out cute girls.

Be careful about carrying drugs as you hop from bar to bar in cabs. Police make random stops and searches, especially in Ipanema. For food, visit Garota de Ipanema and order the Picanha a Brasileira no Rechaud, which is a hunk of beef that you cook on the table. The Ipanema branch is located at Rua Vinicius de Moraes 49. 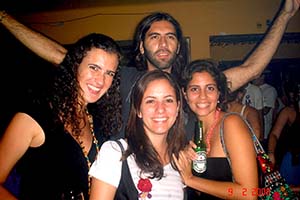 Pretty easy pickings can be found in Shennanigans Irish Pub (Rua Viconde de Piraja 112, Ipanema). Quality is not great but the local girls who come here like gringos. A similar type bar on the other side of Ipanema is Lord Jim (Rua Paul Redfern 63). The bar is more fun with live music but it is harder to pick up here because of its small, cramped size.

Every gringo winds up in Emporio, a bar/lounge whose crowd spills out onto the street (Rua Maria Quiteria 37, Ipanema). I have no idea why it’s popular with gringos but it sucks so do yourself a favor and avoid it.

If you want to pick up cute girls who are not heavily exposed to gringos like at Shennanigans, go to Casa Da Matriz in Botofogo (Rua Henrique de Novais 107). It’s a small club with a house party feel that attracts a laid back crowd. Friday is more crowded with mainstream music but Saturday rock nights are also good.

If you want to get the Brazilian samba experience, head to Rio Scenarium in Lapa (Rua do Lavradio 20). Just don’t come here to pick up because much of the crowd is approaching their 50’s. For a younger night hit the Lapa street party on Friday night near the arches. If you are trying to hook up though you’ll have to go inside a bar or club because the quality on the street is not very good. 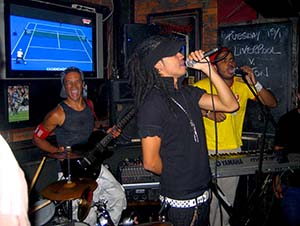 For a Lapa-lite experience, head to the Praca Santos Dumont square in Gavea. Patrons from two bars spill onto the streets.

00 is a pretentious lounge in Gavea (Av Padre Leonel Franca 240) with good caipirinha’s and a hit-or-miss crowd. Thursday and Sunday are gay nights. If you are wondering why a club would have two gay nights per week it’s because the owners are gay.

And then there is Help, a marketplace for gringos and Rio’s finest working girls to exchange sexual services for money. Even though all the girls are prostitutes, it’s not just a simple matter of going up to a girl and saying “How much?” These girls are not hurting for business so you need to approach them like you would any other girl and see where the conversation takes you. If you feel uncomfortable being in a room with women who have sex with money, then don’t come. Cover is almost $15 but drinks are reasonably priced. Help is in Copacabana but you don’t need an address because every taxicab driver knows where it is. 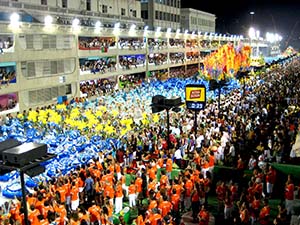 Carnival is the massively hyped celebration that starts just before Lent (either February or March—check your calender). There are two parts: the street parties, called blocos, and the samba parade. Since you have seen photos of half-naked Brazilian women promoting Carnival since you were young, I must tell you one thing: your chances of getting laid in Rio decrease during Carnival. Yes you read right. If you want to party with friends and experience the biggest party in the world, then definitely hit Carnival, but if you want to sex Brazilian girls, go during any other time. This is because Carnival is more about singing and dancing then having sex. For some more detail about Carnival, check out the article I wrote for Volette:

Dozens of vendors with styrofoam coolers sold $1 cans of Skol beer and bags of frozen caipirinhas. Chefs with their barbecue grills on wheels sold large sausages on sticks. If you come from a country with strict alcohol laws, this part of Carnival will be the most welcome. After you finish a can of Skol, simply throw it on the ground for the always present can collectors. (If you couldn’t put together a costume in time, simply grab a trash bag and your can collector costume is complete.) Eventually the streetcar started up again and the crowd sang and dance its way back to where it all started. Tired at only 12 noon, I was told there were several more blocos to attend. Continue Reading

The hostels in Rio still have a long way to go, and most get mixed reviews from travelers. It is not necessary to swing for a hotel if you think you need a place to sex your Brazilian because there are many hourly hotels throughout the city. Ask any local guy for recommendations or take her to Hotel Lido in Copacabana (corner of Rua Ronald de Carvalho and Rua Ministro Viveiros de Castro). Two hours cost about $40.

Mellow Yellow (Rua General Barbosa Lima 41, Copacabana)
25 reals/night for dorm room (click here for dollar conversion). The good: fun bar, nightly dinners, mostly friendly staff, decent location in Copacabana, and reasonably priced tours, including outings at night. The bad: a serious bed bug infestation, which is reason enough to stay away. As of January 2008 they were making sincere attempts to rid the problem but they will have to try a little harder. 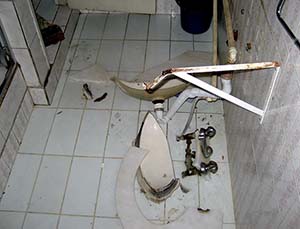 The Mango Tree (Rua Prudente de Morais 594, Ipanema)
30-40 reals/night for dorm room (click here for dollar conversion). Smallish dorms but very clean and well-kept in a very nice Ipanema area close to restaurants and bars. Free internet. If I could do my Rio experience all over again, I would have only stayed here.

Che Legarto Budget (Rua Santa Clara 304, Copacabana)
28 reals/night for dorm room (click here for dollar conversion). Mattresses are paper thin and cleanliness is not a priority. Location is also at least 10 minutes walking from any stores, and 15 minutes from the beach. The staff is friendly but completely apathetic; they care more about getting drunk with the gringos than doing their job. Only positive (or negative depending on your point of view) is that there are more international travelers than the typical 90% Australian crowd. I declared this hostel the worst in South America.

Rio de Janeiro On The Blog

I wrote two posts about Brazilian girls. Here is the first…

While there is zero guarantee you will get action when you go out, you’re a huge idiot if you go out at night without cheap motel money and a condom or three. Continue Reading

Most Brazilian girls in Rio speak English, and it’s not hard to see why with an English school on every other block. Your approach will be the same as on American girls, and their initial response will be the same as well (sometimes a little aloof), but what’s different in that if the Brazilian girl is feeling your game, things ramp up quickly and within two minutes it will be obvious if things will progress. She will ask you a bunch of questions, ask you to dance, or ask you to come hang out with her friends. You will get the “kiss me” vibe much faster than other girls as well… Continue Reading

I also wrote about the gym culture.

In the States you see a lot of young girls in the gym because of the popularity of female high school and college athletics, but in my Brazilian gym the average female was slightly over 30. But these were the hottest 30 and over women I’ve ever seen in my life, even if a fifth of them had fake breasts. Continue Reading

Other Cities In Brazil

If you liked this post then I think you'll like Roosh's Brazil Compendium, a 98-page strategy guide designed to help you sleep with Brazilian women in Brazil without paying for it. It contains dozens of moves, lines, tips, and city guides learned after seven months of research in the country, where I dedicated my existence to cracking the code of Brazilian women. Click here to learn more.
Got an opinion? Something is outdated? Share it by posting a comment below.