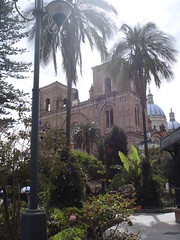 Cuenca is by far the most visually appealing Ecuadorian city, with cobblestone streets, buildings that are somewhat in harmony with each other, and most importantly, cute girls. The girls make it seem like you arrived in a different country. You will see many of them during the daytime walking to and from work and school, but the problem is finding out where they party (if you find out, let me know). Still, it’s worth a visit for a couple days.

Start off by walking to Parque Calderó and its two churches, one gigantic that everyone goes to and the other puny that you’ll spit on as you walk past. A cheap ice cream shop (by American standards) called Tutto Freddo is on the square. Two blocks south is Café Austria, which has so-so coffee and desserts but a comfortable atmosphere with classical music. Way south is Museo del Banco Central, featuring rather sedate dioramas and shrunken heads purportedly made from the skin and hair of dead people. Behind the museum you can walk around some old Incan walls, or view them for free from on a walk alongside Rio Tomebamba, where you may see women doing laundry. 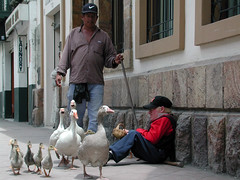 The best reason to visit Cuenca is for Cafe Moriendo, a block east of El Cafecito. They have dirt cheap Colombian meals, mostly arepas, and authentic drinks from Colombia.

On Wednesday night go to Café Eucalyptus, a block north of Parque Calderó. Ladies get four drink coupons, meaning the guy/girl ratio is decent throughout the night, even though most girls sit at tables. A band plays salsa music starting around 11PM and there is dancing. Afterwards, hit La Mesa for the after party. The city has a lot of small bars but they all are dominated by sausage and only have 5-10 people in them. On the weekend I could not find the hot club spot—only bars with a few people in them.

El Cafecito (Honorato Vásquez 7-36)
$6/night for dorm room. Decent cafe but the bathroom in my room was a bit shabby. Has a restaurant that is extremely popular at night, but everyone is in their groups sitting down, making the four stool bar a bit lonely. Location is central except for the church next door that starts ringing bells at 7:30AM. Free wireless internet (when it works).

Other Cities In Ecuador

If you're only going to visit only Ecuador then I recommend you get this guide, which is far more detailed than the continental guide above, with options that cater to a range of budgets instead of only the shoestring backpacking crowd. Also it gives more respectable treatment to small cities and towns that the larger guide breezes over with a paragraph or two.