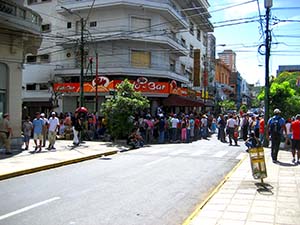 Think of Asuncion as Quito but with lighter skinned people addicted to drinking mate. There is not much to do here and I don’t know why I came.

Plaza de los Heroes has handicrafts, there are some old colonial buildings by the bay, and Confiteria Bolsi on Estrella and Alberdi has a nice diner vibe for breakfast and lunch.

Rodizio on Palma 591 near 15 de Agosta is one of the best restaurants I’ve been to in South America with their delicious buffet.

I did not get a chance to sample the nightlife but with some cute girls floating around in the city I imagine it can’t be that bad.

Hotel Miami (Mexico 449)
$14/night for private room with bath and air conditioning. Clean but run-down, like most hotels in the city. My sheets had to be at least 20 years old with several patches, and I tried not to think about how many thousands of people had sex on them. A bat dropped dead next to me here resulting in me getting five rabies vaccine shots (see below). Not recommended.

Asuncion On The Blog

I had a pretty scary experience when I woke up next to a dead bat in my hotel room.

I went to bed on Wednesday at midnight. I woke up around 4:15am with my hand touching something on my bed. I pushed it aside and settled into a new sleeping position. About four seconds later it hit me that THERE IS SOMETHING FURRY ON MY BED. Continue Reading