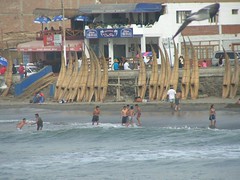 Huanchaco is the beach town suburb of Trujillo, Peru’s third largest city. Most travelers stay at Huanchaco instead of the city center because it’s only 5 miles away and, well, it’s the beach. Other than the rickety combis buses that pass by every few minutes to take you to the center of Trujillo ($0.50), Huanchaco feels like a modern American beach town, with the occasional dredlocked hippie sighting. The beach is dead outside of the summer months (December – April).

The main city of Trujillo was founded by a Pizarro henchman, who had to build a wall around the city to protect the city from the Incan barbarians. The wall is now replaced by a major thoroughfare (Espana), but two portions of it wall remain, one on the east end and one on the north.

It costs $0.25 to get on the pier of Huanchaco where you can watch surfers catch waves as the sun sets. For food, eat at Otra Cosa (Larco 921) for amazing vegetarian meals and snacks. They also have wireless internet. Supposedly you can catch a rickety straw boat with a fisherman and ride the waves back with his catch, but none were around in the winter. There is surf board rentals and schools around the main strip.

In Trujillo, visit Plaza de Armas in the center and stop by Oviendo Cafe three blocks north of the Plaza on Pizarro for excellent desserts and mediocre espresso . There are several Incan ruins around Trujillo, including the dirt piles of Chan Chan, which you will see on the cab ride over to Huanchaco from the bus station ($3-4). You will not be impressed, but the complex inside has more appealing carvings and structures. 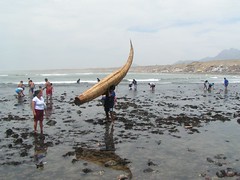 Huanchaco is dominated more by restaurants than bars, and you will have to wait until the weekend if you want to see actual human beings out after 9PM. Trujillo has a couple of nightspots, but if you stay at Huanchaco you won’t be bothered to try them out.

The town seems to be sponsored by the beer Pilsen Trujillo, which blows away Ecuador’s national Pilsener.

Hostal Naylamp (Victor Larco 1420)
$5/night for dorm bed. The lodgings were unacceptable. Six beds were packed into a tight space and the room was not cleaned the day after I arrived, leading to a full wastebasket of soiled toilet paper (you can’t flush it down in Peru, or in the rest of South America). The private rooms seemed a lot better, and there is also a campsite out back if you like roughing it to save a buck or two. This place has two positives: the receptionist who has a very nice body (she knows it), and the cheap and tasty breakfasts.

Other Cities In Peru

If you're only going to visit only Peru then I recommend you get this guide, which is far more detailed than the continental guide above, with options that cater to a range of budgets instead of only the shoestring backpacking crowd. Also it gives more respectable treatment to small cities and towns that the larger guide breezes over with a paragraph or two.