Punta del Este attracts the most arrogant and superficial Argentines and Brazilians with oversized Hollywood sunglasses who want to “see and be seen.” If you come here alone it’s very doubtful you will make new friends outside of the hostel. Everything is astronomically priced, especially the nightlife, making Western clubs seem cheap. Sun tan lotion runs at $25 a bottle. The beaches are nice but I recommend Puntal del Diablo instead.

Punta del Este has ideal waves for beginner surfers. Walk north on Playa Brava from around the bus station until you get to a large red building shack that is a cafe. Cross the street at that point and on your right you will find Sun Valley Surf. I recommended their five-hour beginner course for $100 which includes board and wet-suit. Board rental is $35 for four hours. 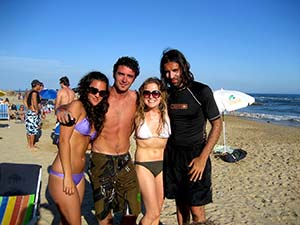 Rent a bike to check out all the beaches. Buy handicrafts from Plaza Artigas.

La Barra is the overhyped, overpriced club zone nearby. To get there, go to the bus station to catch the 24-hour La Barra bus. These clubs are hard to get into after 2AM because of the crowds, so show up early. There are two sides of La Barra: the kiddies who drink outside and the filthy rich who are not phased by the cover charges. I don’t see why you’d want to hang out with either.

For an easier night out that is just as expensive, hit Calle 13 by the port and its several bars and clubs.

El Hostel (Arrecifes 544)
$30/night around New Years and $25/night for rest of January peak season. I’ve never seen a hostel try so hard to make a buck. The TV break room was converted into a massive dorm room so there was nowhere to eat or sit but outside. The staff was nice but the showers were usually cold with low pressure and breakfast was burnt toast. At least there were lockers. This is what happens when there are only two hostels in the city.

Other Cities In Uruguay