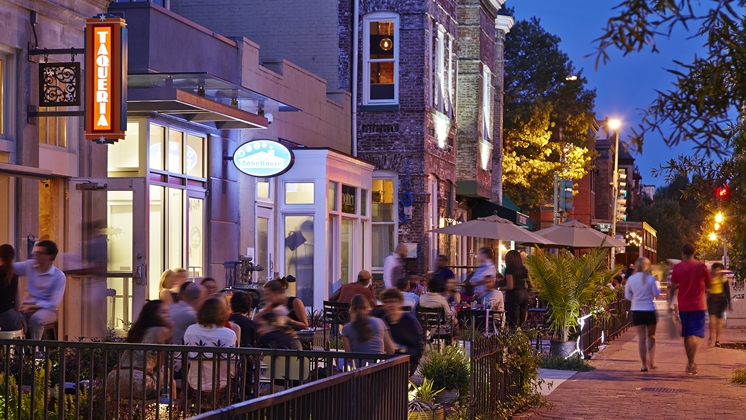 Between 2008-2014, I noticed a degradation of DC nightlife and women each time I came back home from a trip abroad. Its decline was a major contributing factor in my expatriation to Eastern Europe, where I currently reside, but for my past two consecutive trips to DC, I’ve noticed that the city is no longer getting worse, across several areas.

Male-female Ratio: DC is still a sausage fest, and always will be thanks to the government and military jobs in the area, but the ratio has stabilized. If you go out early on the weekends, starting at 10pm, you will encounter quite favorable ratios that only start to flip around midnight. It may even be worth going out at 9pm when girls are wrapping up their foodie dinners.

Female Obesity: DC has plenty of land whales, especially among the black population, but they’re not getting fatter. Many foreign and white girls are only a few pounds overweight. Unfortunately, some women go in the wrong direction for their weight problems by doing CrossFit, which gives them a body of a boy who just went through puberty. I rather date a fattie than a muscular woman.

Female Style and Appearance: I was surprised to see many girls wearing heels in the bars. If I visited during the summer, I may have seen them wearing flip flops instead, but in my most recent trip that ended last week, they were dressed up quite nicely. Many girls had long hair and a select few had a rather sexy look.

Female Attitude: A growing problem here is that girls get triggered very easily if you say anything politically incorrect, but as long as you avoid political discussions, you could have pleasant interactions. I only did a handful of approaches on the latest trip, and didn’t try to get laid, but I wasn’t blown out or treated poorly. The girls seemed open to getting approached, probably because guys are doing it less than before. The game I saw being done was mostly by black men on white girls.

These observations come from going to places I already knew, so it’s quite possible that there are even better DC venues I haven’t been to yet. If I was forced to live in DC for an extended period of time, such as in the case of a relative getting sick, I would live near a Whole Foods for day game and find two or three medium-sized bars within walking distance of my apartment to do 2-5 approaches about twice a week. To supplement these efforts, I would try to find international venues where I could easily show value with European au pairs. I would also increase my target age range. In Eastern Europe I focus on 21-25 year olds, but in America I’d go for 24-29 year olds since large age gaps take more effort to pull off in the States. If I made all those changes, I could probably manage okay in DC without falling into a suicidal depression.

Since the introduction of smartphones and social networking, we haven’t had any new shocks which would degrade women further. Almost every woman you encounter has owned a smartphone for more than five years. Her behavior declines in the first couple of years upon using a smartphone or other new cultural invention and then stabilizes. This is why DC women are not getting worse but Eastern European women are: the smartphone was adopted widely in the latter much later. Once Eastern Europe bottoms out in the next couple of years, I’ll probably find that the behavior of American and Eastern European women overlap much more than before the smartphone.

I must stress how shocked I was to see so many American women wearing heels. In Eastern Europe, a Scandinavian hipster fashion has taken over, and many girls under 25 now wear sneakers to the club. Even in Ukraine, the country with the most feminine women on Earth, there are more hipsters with tattoos than before. These foreign trends are expected because culture has become globalized—women in different countries consume similar media on the same devices while eating the same types of food. American girls who remain thin can soon compete well on a world stage, not because they’re improving, but because foreign women are getting worse. Once those foreign women hit a bottom, which will take 2-4 more years, they may not be that much better than American women.

Now that my player days are behind me, I don’t dread the idea of having to live in America like before, but I won’t come back anytime soon because of one reason: the cost. My living expenses in Eastern Europe are only 20-25% of what I would have to pay in DC for the same lifestyle. The only other real advantage I have in Eastern Europe is the ability to date younger girls who are more elegant and pleasing. I left to foreign lands for the adventure, freedom, and women, but it’s turning out that I stay because of money.

Read Next: 15 Reasons Why Washington DC Sucks For Guys