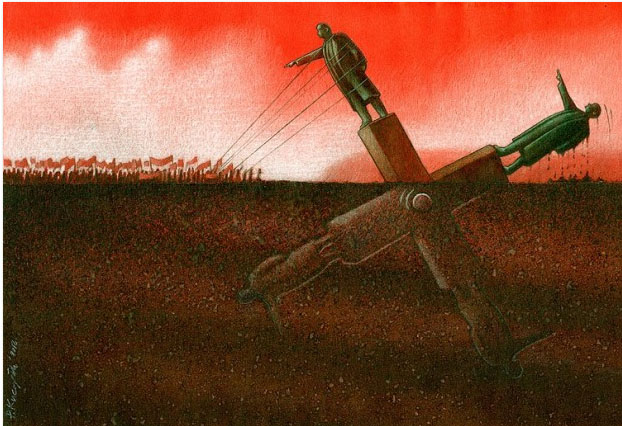 Government is the enslavement of a population within a defined set of borders called a nation, where a parasitic class termed the “elite” maintains complete control and authority of the population to accumulate power and wealth. Elite groups have evolved different styles of control depending on the geography, genetics, environment, and culture contained within its borders.

Everything a government does is to preserve or increase the power and wealth of the elite. This requires various levels of carrot and stick. Benefits or rights given to citizens, while seemingly altruistic on the surface, are approved by the elite because through some mechanism it preserves their power and wealth. Some may cite America as an exception, since citizens were given the most rights and freedoms out of any other nation, but it must be considered that this was only to steal power from the existing British elite and establish central control (the Federal branch). The States were fed enough carrot to ratify the Constitution with all its “rights,” which by 2015 has steadily eroded and exist at times as mere abstract ideals, especially in light of the increasing Orwellian police state we find ourselves living in.

The right mix of carrot and stick is essential to maintaining control over the long term, because enough economic growth and well-being must be created so that citizens don’t revolt or so the nation doesn’t suffer an economic collapse. These negative scenarios would eject the current group of elites, allowing a new set to usurp power and try their hand at being slavemasters with—hopefully—an improved plantation management system that prevents their own demise.

I don’t use the term enslavement in jest. A significant percentage of your labor output must be given to the government, regardless of the benefits you receive, or you will be imprisoned in a cell. If you break a law that the elites have passed, no matter how unjust, you will be imprisoned. You will be surveiled and monitored, regardless of the legality of the method, and there is nothing you can do about it short of replacing the current set of elites with another that will initially use more carrot so you approve of your new slavemasters in their taking of power.

Whenever one set of elites comes into conflict with a set of elites ruling a different nation, a war may occur. War is when elites have calculated that violence is the best option to increase their wealth and power, or to protect their existing wealth and power. Once a war is justified on those terms, citizens are fed propaganda to authorize the war, one that will at least temporarily reduce their living standard.

Self-defense is the most common reason elites state as the reason for going to war. It is true that war is self-defense in that it’s a defense of the elite’s interests, not those of citizens, who are seen upon as replaceable machines that generate their wealth and power and which must be constantly controlled and manipulated to guarantee consistent output.

There are three options for non-elite citizens. The first is to become elite themselves. The elite club does have sporadic openings for men with high levels of ingenuity, ambition, immorality, and luck. The second is to minimize elite oppression by evading their methods of control or minimizing exposure to their unquenchable demand for tax and tribute. The third option is to become a house slave where you are close to the seat of elite power and therefore receive some of their power scraps. A common way to achieve the last option is to climb the government bureaucratic ladder or work in the media establishment. Most citizens, however, are ignorant of their slavery, and actually believe that the point of government is to serve them like a mother nurtures its child.

Understanding a government’s true function can explain why a phenomenon like nationalism has been eradicated by the elites: it was a constant threat to their power. Globalization, a way to remove national self-identity, prevents one citizen from associating deeply with his neighbor and therefore less likely to fight beside him in an attempt at overthrowing the elite. After nationalism was tapered in the post WW2 era, the elites of the West have been embracing cultural Marxist policies, which aim to do to the family unit what globalization has done to national identity.

The more a citizen is dependent on the government, while distrusting neighbor, husband, wife, mother, and father, the more likely the elite will maintain long-term control over such a population. A slavemaster is always working on methods to make sure his slaves are completely dependent on him, both physically and emotionally, so that even if the slave has a chance to kill the slavemaster or escape from the plantation, he instead decides to remain enslaved, rationalizing all the good his slavemaster does for him.

This real function of government is consistent around the world, suggesting it may even have its origins or instructions in human DNA. Therefore an enslaved citizen must not lament being born into slavery. Instead, he must understand his condition, the rules of his enslavement, and live in a way that minimizes the worst components of it (brainwashing, imprisonment, impoverishment) in his pursuit of happiness, truth, and virtue.

His pursuit must be taken individually, without depending on the government, whose loyalty only lies in its own power and wealth. No loyalty must be given to the elites of any country who does not have loyalty for him. The best option is to vigorously pursue self-reliance and individual strength in order to endure the burden of the elite’s oppression while surviving the often violent changing of one set of elites for another. For as long as humans live, the elite will parasitically sponge off the population’s lifeblood, but at least we can minimize their most damaging features.

Read Next: What Is Diversity?