Five years ago I went on a short horseback tour in the Venezuelan Andes, led by a Frenchman who landed in Caracas fifteen years before. He lived with his wife and daughter on a horse ranch on the outskirts of Merida, making a small side income by giving occasional tours to gringos like myself.

He never planned on settling in Venezuela. It started when he was rehabilitating a boat that doubled as his home while docked somewhere in the Caribbean. “It was my project,” he said to me. “Several hours a day I worked on that boat.” One day he learned that a hurricane was approaching the islands. To save his boat he decided to go out to sea, as far southwest as he could. Unfortunately the hurricane was not forecasted correctly, and he ended up getting caught on the storm’s edge. His boat sustained heavy damage and he was forced to make landfall in Venezuela.

He sold his boat for scrap and moved to a Caracas slum. Thanks to his knowledge of French he picked up Spanish quickly. He found odd jobs here and there and eventually met his future Venezuelan wife. They resettled in Merida where he bought a small piece of land upon which he built his ranching business. A look at his dozen horses, workshop, large house, and gun collection made it clear to me that he did well for himself. 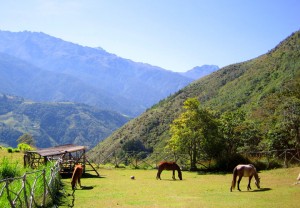 After he finished his story, he looked at me and asked, “What is your project?”

“Yes, your project. What are you working on?”

I had a blog at that time, but was that a project? To me it seemed more like a way to procrastinate from doing work reports. “I just started the outline to a book I want to write,” I said.

“So you’re going to write a book?”

I hesitated. Before that moment I had only thought about writing the book, jotting down ideas on napkins here or there, but had never fully committed.

I looked at the Frenchman and said, “Yes, I’m going to write a book.” Apparently all it took was verbalizing the goal to get my brain to commit to it, and Bang was released a year and a half after that. You can say it was my personal hurricane.

Chances are if you’re reading this, all your basic survival needs are met. You have food, shelter, clothing, and hopefully women as well. Maybe you want more money, but it’s safe to assume you have enough to get by and are in no danger of starving to death. There probably isn’t much telling you to go above and beyond your current situation. No one to motivate you to learn a new skill, no one to push you to take a risk with something that has no obvious opportunity for monetary gain. Besides what you’re assigned at work or school, you’re not required to do anything else but spend your free time watching television, reading magazines, or playing video games. That’s not a bad existence, and a billion men living in the slums of the world would kill for it, but it’s not good enough for one reason: there is no growth. You will be the same man that you are now in ten years time—grayer, but no wiser.

For you to grow, there has to be something in your life that is difficult and challenging. There has to be a goal where the chance of failure is very possible, and it has to be hard enough where you’ll be required to call upon forces within you that you didn’t know existed. There has to be a point where you wonder to yourself, “Maybe I can’t do it—maybe I’m doing all this for nothing.” If you don’t day dream about quitting, about going back to what you used to do, then you picked something that wasn’t hard enough.

If it is hard enough, the mere act of attempting to accomplish your goal will make you a better man. Success is not at all required—it serves as the cherry on top. The journey itself will be its own reward, and you’ll look back to how far you’ve come. And how much wisdom you’ve gained. I cannot predict what benefits will come from taking on a difficult task. It really could be one of a hundred things, most of which you would have never expected. But it will come.

So, what is your project?