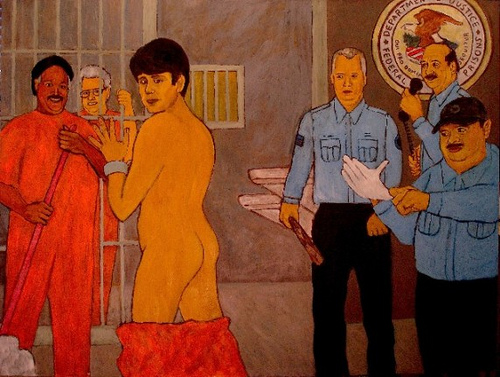 I’ve never before had a problem coming into the US from abroad, but that changed with my recent trip to New York City. I was pulled aside for extra screening by Customs and subjected to a search that made me feel like I was being accused of a crime.

After deplaning, I was required like everyone to use an electronic kiosk where my photo was taken. I was given a receipt that I presented to the border patrol agent with my passport and customs form.

“So this is a business trip?” the guard asked.

“What kind of business are you into?”

“Internet,” I said, after a two-second delay.

“Where have you been recently?”

“Why were you there?”

“So what kind of business are you doing on the internet?”

If you read me, you know it’s not that easy to explain. I write books, operate a forum, run two large blogs, have a personal blog, and so on. “Lots of things,” I said.

“Okay,” he said sarcastically while rolling his eyes. He wrote something on my form.

I wondered to myself if he got sore by my answers and wrote a code which would subject me to an additional search. Sure enough, after getting my bags and going through the exit, I was pointed to the secondary screening area for further inspection.

At that time I noticed people with a passport color that wasn’t like mine going right through. I didn’t understand why I was being singled out for a search when non-citizens weren’t. Why was I being treated worse than them? Is there a new directive to screen citizens with Muslim names who have visited Eastern Europe?

I waited ten minutes and was prompted by another agent.

“So what are you doing in New York?”

“I’m appearing on a TV show.” He opened my main bag and began going through my things.

“Where do you live now?”

“Yeah, why don’t you live in America?”

“Because it’s expensive and the women are fat.” He stopped searching and looked at me. “I’m a thin man so I can’t handle the larger sizes that American women now come in.”

“Well that’s a good reason,” he said. I didn’t pick up on any sarcasm.

“I do internet stuff.”

“What kind of stuff?”

“Like in what?” He motioned with his hand for me to keep talking.

His search of my bags was lazy. He didn’t go through the side pockets or even individual items. Several years ago I was subject to a random drug search in Colombia and they even went through the inside of my socks. The only thing this agent’s search could have found is a huge five kilogram package wrapped in masking tape with the words “COCAINE” or “EXPLOSIVE DEVICE” written on the outside in black marker.

I gathered my things. “So why was I selected?”

I didn’t understand his answer. “I see people who are not citizens that aren’t subjected to this, and I didn’t break any laws. I pay my taxes every year. I don’t understand the reason.”

“It was just your turn,” he said louder. I know it’s silly to ask the interrogator if his interrogation tactics are legal, but I wanted to try anyway.

“So what if I were to refuse to answer your questions?” I asked. “I really have to tell you these private details of my life?”

“If you don’t answer, we detain you until you want to talk.”

“It doesn’t matter. You’re not in America yet.”

I’ve traveled to over 30 countries now, and even with the Colombian drug search, this was by far the worst treatment I’ve received trying to cross a border. What I don’t understand is how our government is welcoming millions of illegal aliens of dubious societal value, but is treating a citizen who has never been arrested or even charged with a crime as if he’s a criminal. There are only four reasons I could come up with for why they did this:

1. To find drugs. I don’t know how serious the drug war still is, but even if it’s high, they did a piss poor job in their search. The officer didn’t even look through my bulging laptop bag.

2. To get someone to randomly admit to breaking the law. They are doing statistical profiling to hopefully trip up a criminal mastermind into accidental admitting that he is leading an illegal organization.

3. To justify someone’s pay check. The cancer that is America’s bureaucracy is pushing needless searches because it creates positions that ensure leeches in the system continue to grow and metastasize. More personnel is needed to ask thousands of people every day why they choose to live life the way they do.

4. To instill citizen fear of authority. The government wants you to fear its power while training you in the art of submission. Through various encroachments upon your liberty on both the Federal and local level, we’re being primed to fear the government and do whatever is asked, even if it is against the spirit of the Constitution.

Americans are taught at a young age that government is “for the people, by the people,” but we can now safely conclude that this notion no longer applies (if it ever did). It is “for the elite, by the elite.” You are a replaceable gear in the machine, and so you will be treated as such. Once it’s “your turn,” you will have to make a decision of whether to submit or stand by your principles and be greatly inconvenienced or outright detained. I submitted to my master this time, but I wonder if I will be so willing to do so again.

Read Next: What Is Government?